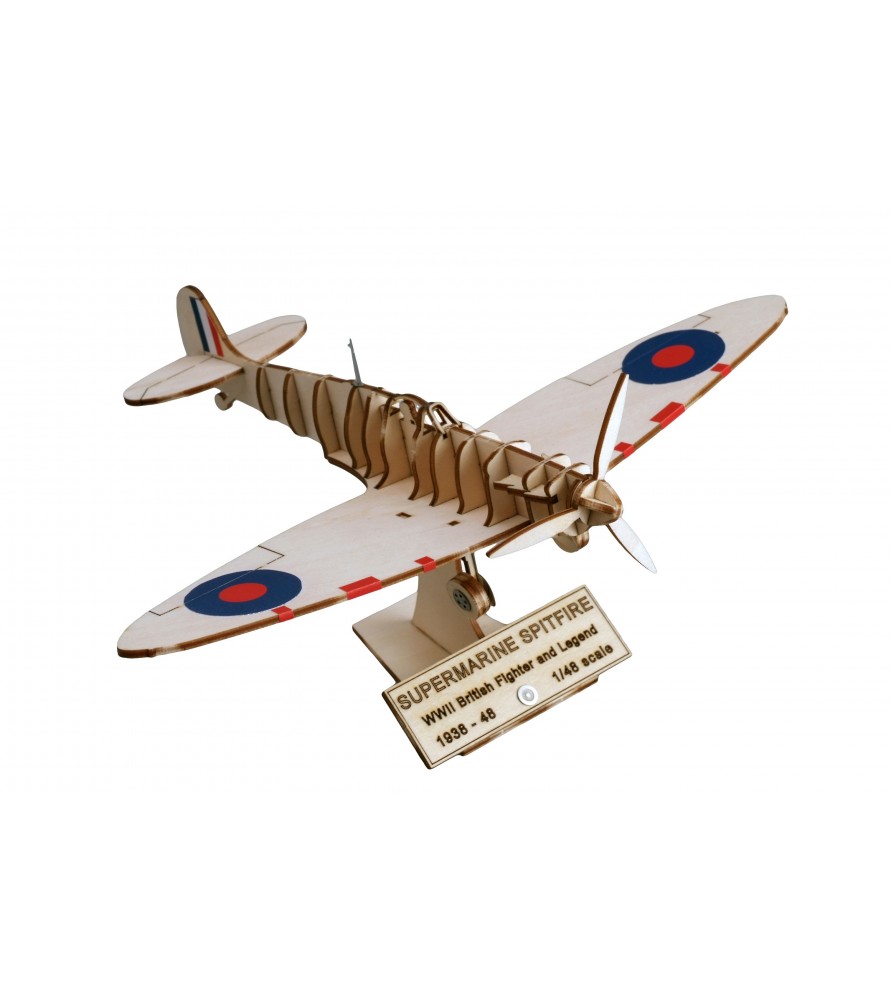 Wooden model of one of the most important warplanes or fighters in history as part of the Allies on the World War 2: Supermarine Spitfire 1/48. Build one of the jewels of aerial modeling while you enjoy because it is easy to assemble guided by a complete set of instructions, as it is happens when you are building all the Art&Wood products collection, which also uses eco-sustainable materials.

Discover the single-seater English warplane or fighter used by the Royal Air Force (RAF) and by many other Allied nations during World War 2: Supermarine Spitfire. This fabulous creation, powered by the Rolls-Royce Merling engine of 1030 HP (768 Kw), remained flying until the 50s in front line hunting and secondary functions. It was the only warplane that was manufactured during the entire war conflict.

The Supermarine Spitfire was designed by R.J. Mitchell, and continued to improve the details of the plane until he died of cancer back in 1937, at which time he replaced his colleague Joseph Smith.

Like main characteristic, the elliptical wing of the Spitfire fighter counted on a thin transversal section that allowed him to reach a tip speed higher than several fighters of the time, characteristic primordial for the national defense against the enemy bombers.

After the success of the Battle of England, the Spitfire fighter became the essential piece of the RAF and participated in the war zone of Europe, the Pacific and Southeast Asia as an interceptor, photo-reconnaissance, fighter-bomber, embarked fighter and trainer.

Build your 1/48 scale model of the British single-seater fighter or warplane that participated with the Forces of Allies during World War 2: Supermarine Spitfire. The manufacture of the model makes its design very reliable to the real old plane.

The modeling kit of the old fighter Supermarine Spitfire, aimed at beginning modelers and those who wish to have a great collection of aerial modeling for display in your home or office, contains pieces of laser-cut plywood board (FSC Certified), so it respects the environment; mobile parts; metal ornaments; base/stand for its exhibition and plaque; and step-by-step instructions for the easy assembly of the airplane wooden model of the Supermarine Spitfire 1/48.