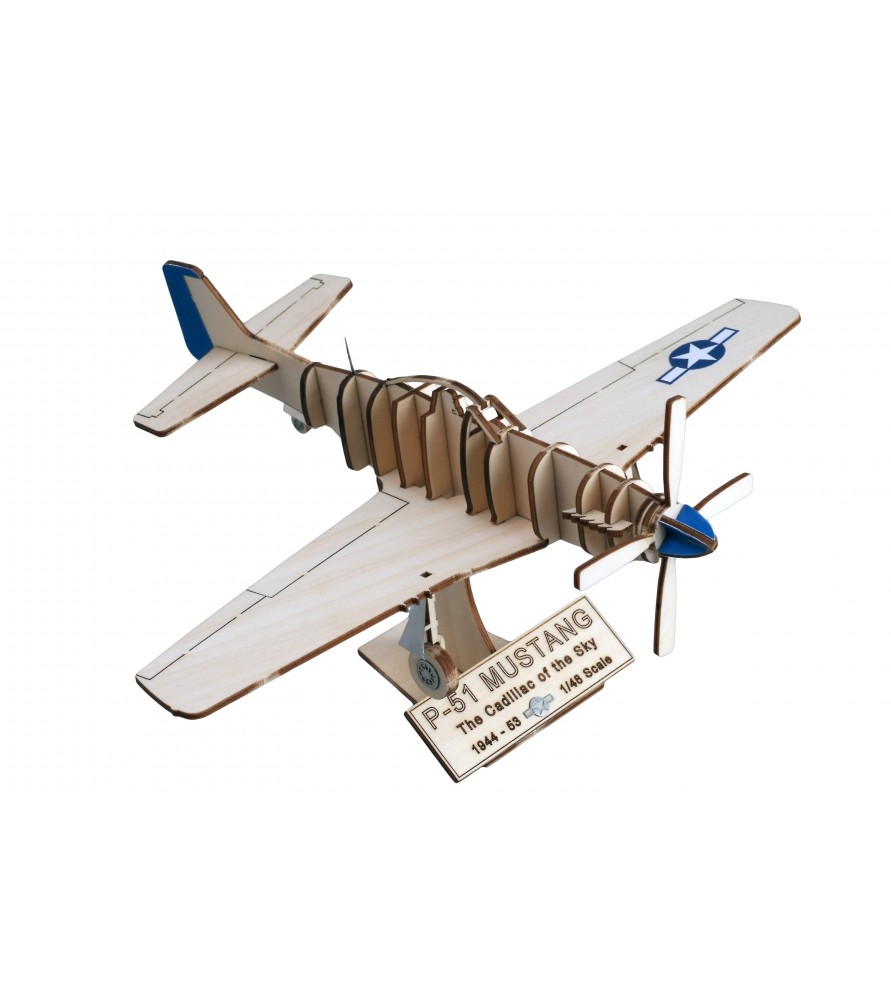 Wooden model of one of the most important fighters in history as part of USAAF and Allies on the World War 2: North American P-51 Mustang 1/48. Build one of the jewels of aerial modeling while you enjoy because it is easy to assemble guided by a complete set of instructions, as it is happens when you are building all the Art&Wood products collection, which also uses eco-sustainable materials.

Discover the long-range single-engine US fighter and fighter-bomber, used by the United States Air Force (USAAF) during the development of World War 2 and the Korean War, among other war conflicts.

The Mustang P-51 was designed by North American Aviation (NAA) in 1940. The British sent another plane to build it, however, rejected the proposal to build one as old as the Curtiss P-40, and decided to build one better: the US fighter Mustang P-51.

The final version, the P-51D, was powered by a Packard V-1650-7 engine, a version of the Rolls-Royce Merlin 66 supercharged with a pair of speeds and armed with six fifty-caliber machine guns.

The P-51 Mustang became a fundamental part of the USAAF and participated in the war zone of North Africa, the Mediterranean, Italy and the Pacific.

Build your 1/48 scale model of the American warplane and fighter-bomber plane that participated with the Forces of Allies during World War 2: North American P-51 Mustang. The manufacture of the model makes its design very reliable to the real old plane.

The modeling kit of the old fighter North American P-51 Mustang, aimed at beginning modelers and those who wish to have a great collection of aerial modeling for display in your home or office, contains pieces of laser-cut plywood board (FSC Certified), so it respects the environment; mobile parts; metal ornaments; base/stand for its exhibition and plaque; and step-by-step instructions for the easy assembly of the airplane wooden model of the North American P-51 Mustang 1/48.