It was one of Artesania Latina scale models preferred by our modeling friends for decades. Now it will be again! Our team of 3D designers and modelers had the task of renovating the 1/65 scale HMS Endeavour ship model. They knew the importance of this faithful British naval replica. For all this, we are proud to present your new 2021 modeling kit, totally improved and adapted to the demands of these times. 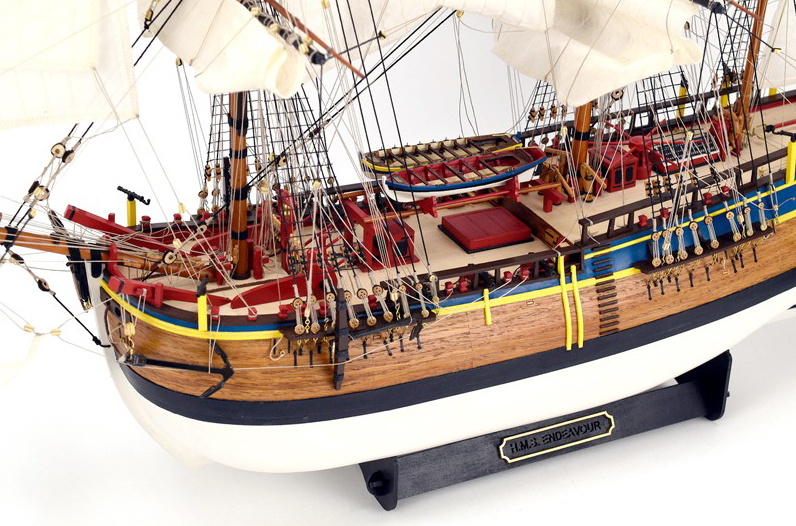 The iconic British exploration and research vessel – formerly a coal boat – with which Captain James Cook discovered Australia can now be built again. The HMS Endeavour naval modeling kit, an 18th century boat, aimed at modelers with an intermediate skill level, can be assembled like the real ship at your own workshop. This is due to the fact that the actual construction system of the ship using false keel and frames is the one that has been adopted for the model itself. 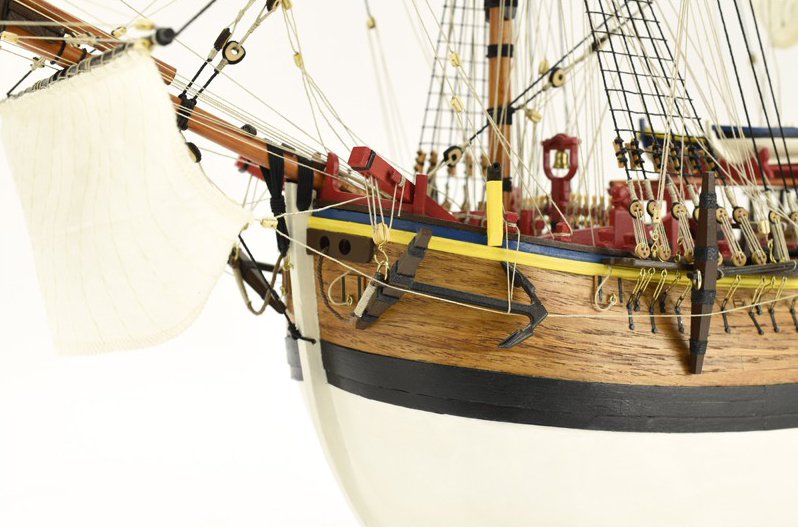 The 1/65 scale wooden ship model of the HMS Endeavour has been completely redesigned. Our team has reliably relied on all the existing information about the ship. Target? Make the miniature as similar as possible to the ship that sailed the South Seas. Below we highlight all the improvements made, one by one. 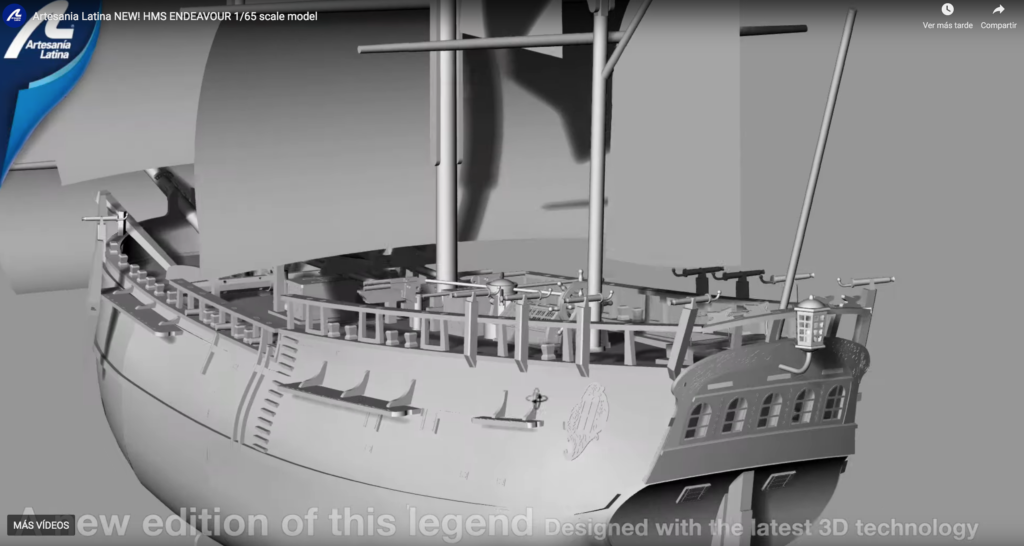 The first thing any modeler looks at as soon as he opens a naval modeling kit is the quality of the wooden parts. The structure that holds the scale model firm is essential along with the parts that cover it. 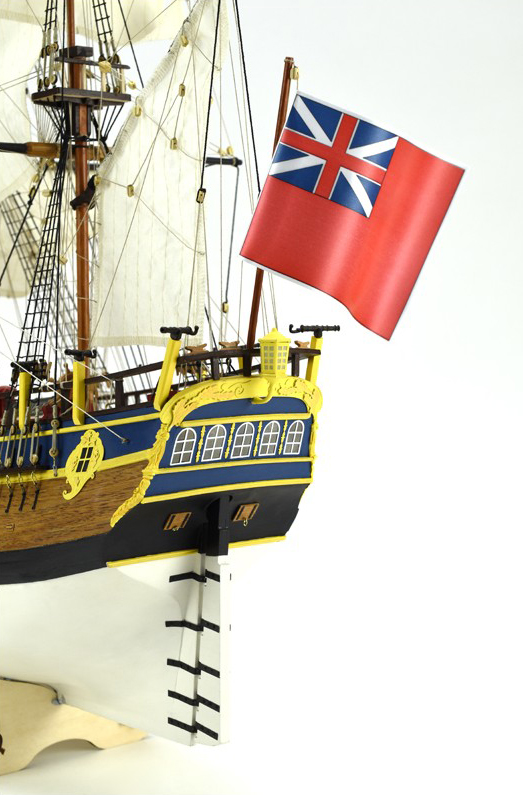 Well, the parts of the HMS Endeavour ship model are made of high-quality birch and linden wood, as well as the seven oak veneers – to complete the hull – and, also, linden. All of them have been cut on a micron way and comply with that high standard that we propose in our product catalog. This is so because we use a very high precision laser so that, later, all the parts fit together perfectly. Almost effortless. It is as if they attract each other like a magnet. 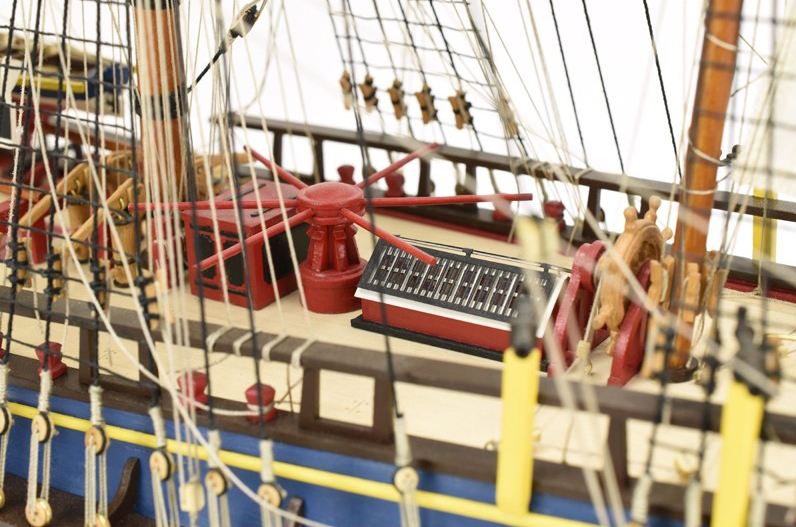 Another great improvement is that the kit now includes “paper templates that, once positioned, greatly facilitate the marking and cutting of how many holes, slots and perimeter contours, among other actions, must be carried out,” says Artesania Latina team. They also adds that “it is not an easy task when it has to be done using other more rudimentary methods -such as those used on numerous occasions by other companies in the sector- that cause irreparable disruptions in the face of the final scale model finish”.

This new HMS Endeavour ship model has much more realistic finishes compared to the old one, now discontinued. Meticulousness would be the noun with which they have been thought and reflected in its photo-etched and die-cast details.

Its photo-etched plate contains parts that replace some of the previous model, now they are much finer and more elegant. But also other totally new ones, “thus helping the modeler during the assembly”, comment our modelers. Both types give spectacular finishes to this jewel of naval modeling. 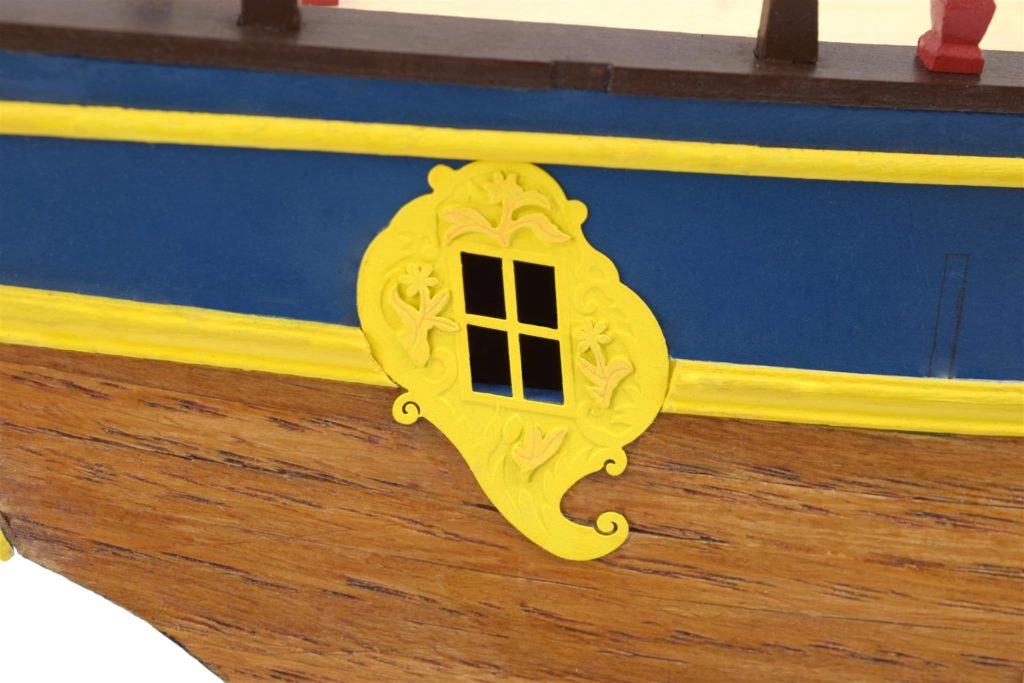 Among others, the improvements made in photo-etched parts focus on the windows, base, horizontal capstan, chains, gratings and lifeboats. 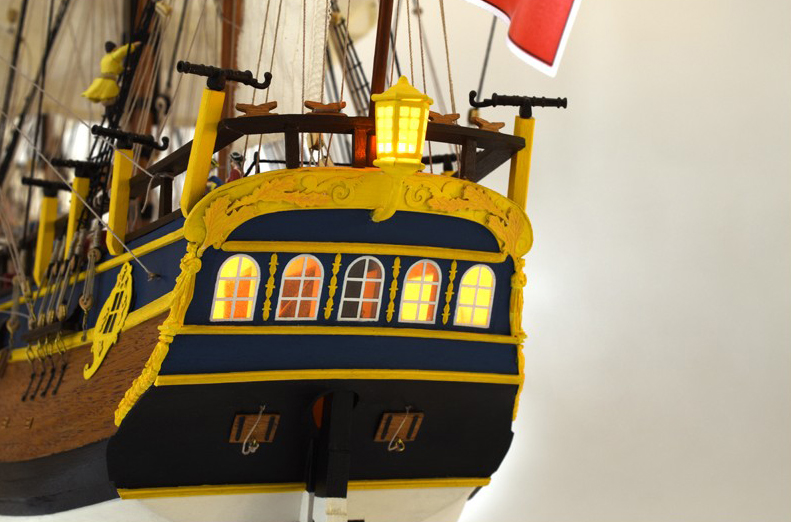 The transom windows and the rear side windows -both before made of die cast opaque-, the skylight -before nonexistent- and the fishing lights now have a more elaborate design. They are very easy to assemble and allow the interior light to pass through different compartments and its transparent acetate.

On the new ship model of the British vessel HMS Endeavour we have developed a system for the pre-installation of LED lighting. “Small supports have been added in different rooms of the ship such as the aft cabins, under the skylight and inside the fishing lights”, the 3D designer specifies. 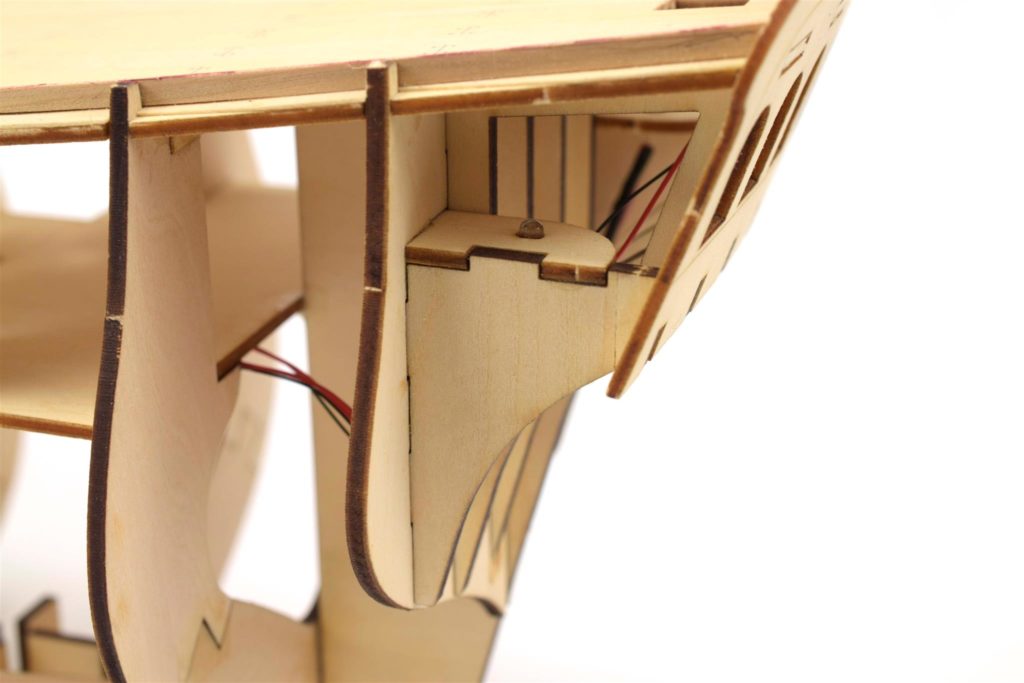 The modeler friend who wishes can attach LED lights in order to make the scale model of the ship comes to life. 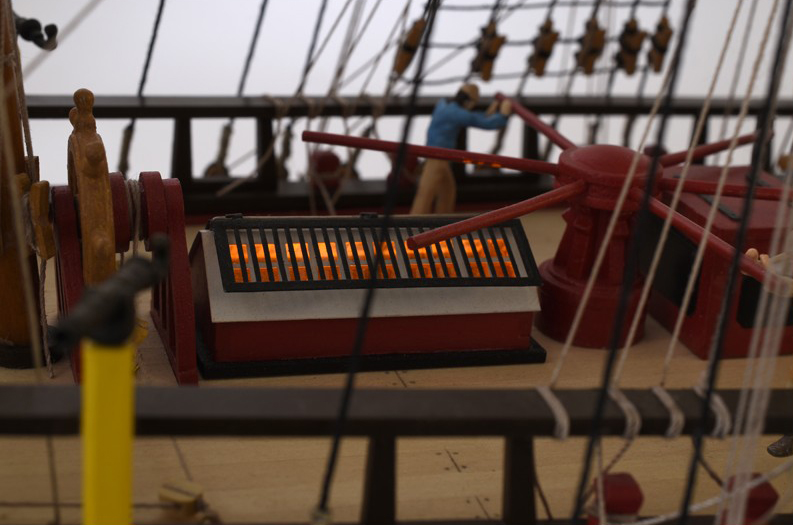 If you want to illuminate your 1/65 scale ship model of HMS Endeavour, Artesania Latina offers you the possibility of acquiring the Set of LED Lightning for Scale Models and DIY Projects, not included in your naval modeling kit. This set has fixed lights and candle effect, battery holder and on / off switch to turn it on and off. 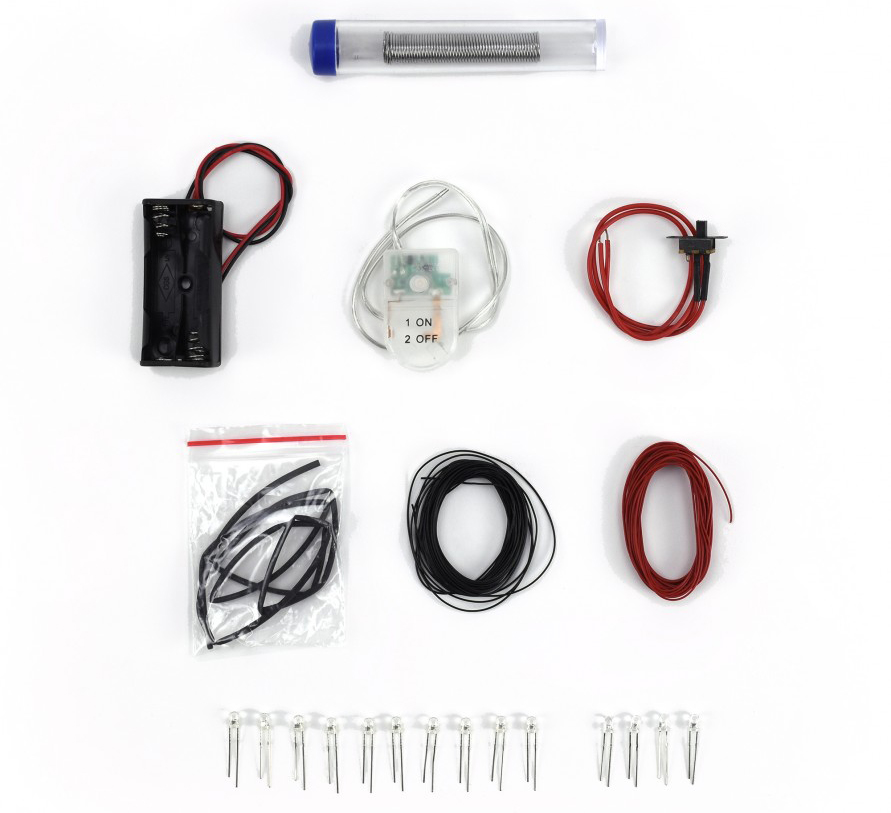 Also, don’t forget one last improvement in this regard! The base is prepared so that the modeler can choose between putting the photo-etched part with the nbota name on it or not putting it on if he prefers that the light passes through the name cut into one of the wooden stringers.

As we mentioned in the previous section, Artesania Latina team has improved many other photo-etched parts on the HMS Endeavour ship model. This is the case, first, of the horizontal capstan, now much more stylized and easier to work with than with the previous model.

The fusion between photo-etched, wood and die-cast, together with the contrast of colors of the parts that compose it -red and black- with the veneer used on the floor, make this a truly beautiful set compared to what makes the competition. 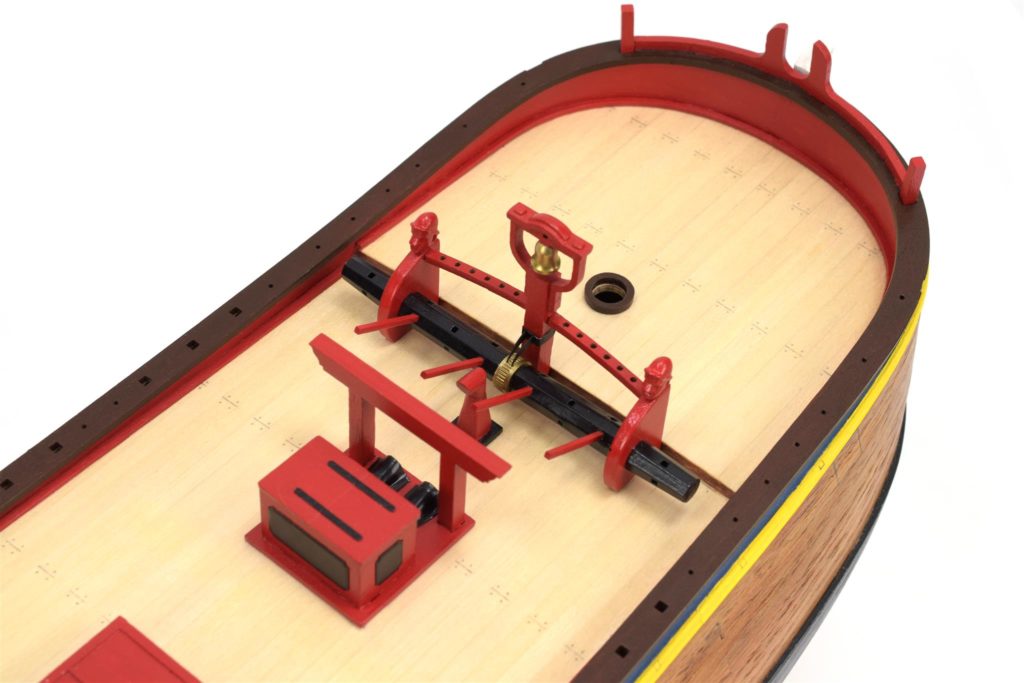 Chains for the dead eyes are now made of photo-etched and it is presented on various sizes, thus resulting less arduous assembly for the modeler. The contrast of black colors –chains- and gold –links- “enhances the ship when a visual sweep is made along the entire side of the ship,” underlines our 3D Design team. 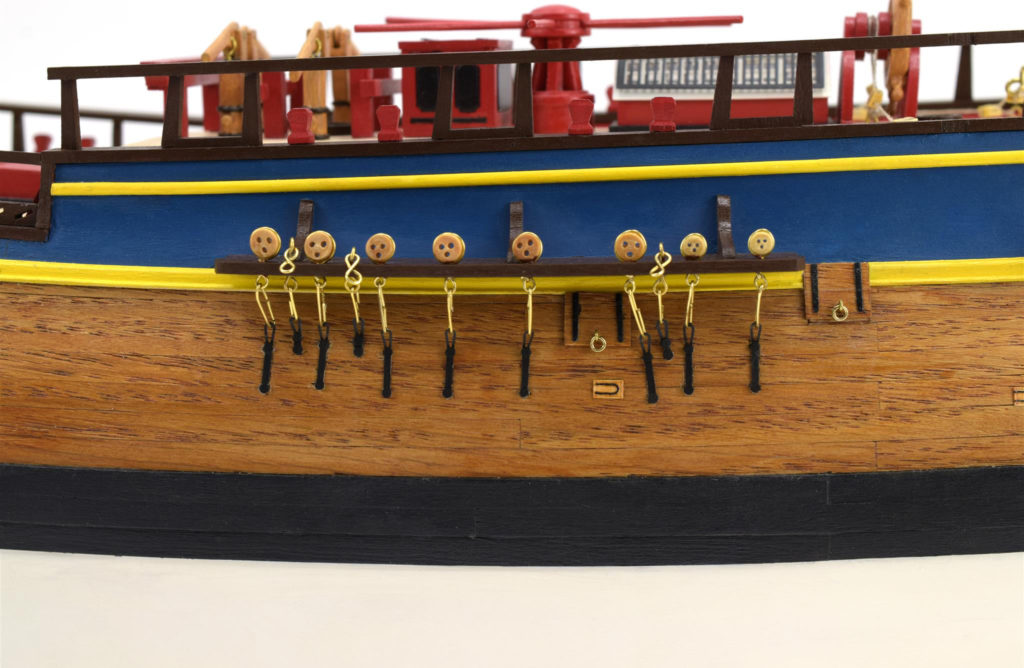 The gratings have been transformed into rooms, with photo-etched details both on the walls – trim plates – and on the ceiling -hinges-. Speaking of LED lighting, the battery holder is perfectly concealed under what was previously a grating. In this way, the modeler can access to the on / off switch whenever he wants, as well as change the batteries when they are exhausted. 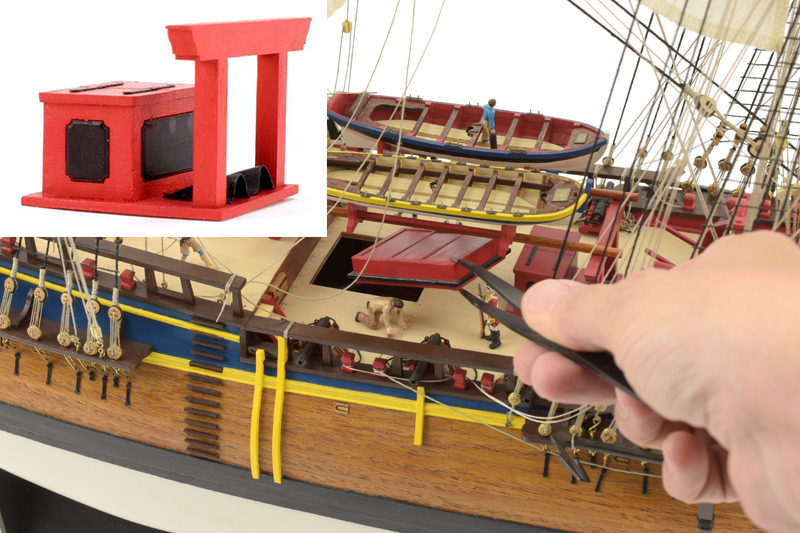 The latest photo-etched improvements are the lifeboats. The modeler only has to choose and apply the appropriate paints on these to achieve an immense quality of finish. 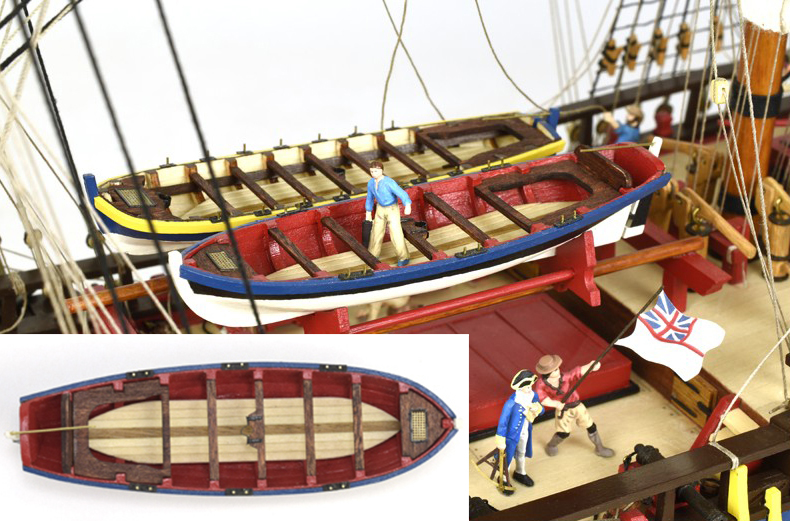 This new scale model of the British ship HMS Endeavour has extensive and precise step-by-step instructions, they are very elaborate and have full color photos. Artesania Latina makes it even easier for the modeler with the inclusion of video tutorials. All on DVD format for the computer. 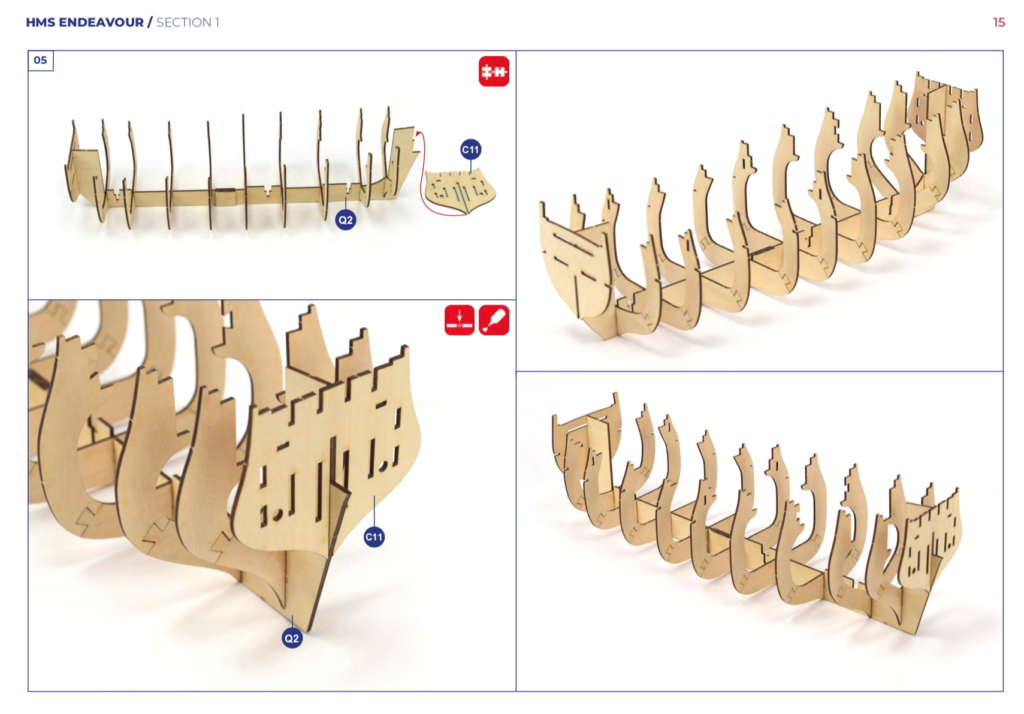 Artesania Latina modelers explain in detail and without giving rise to the slightest doubt the assembly process of the entire model of the ship in its more than 500 digital pages. 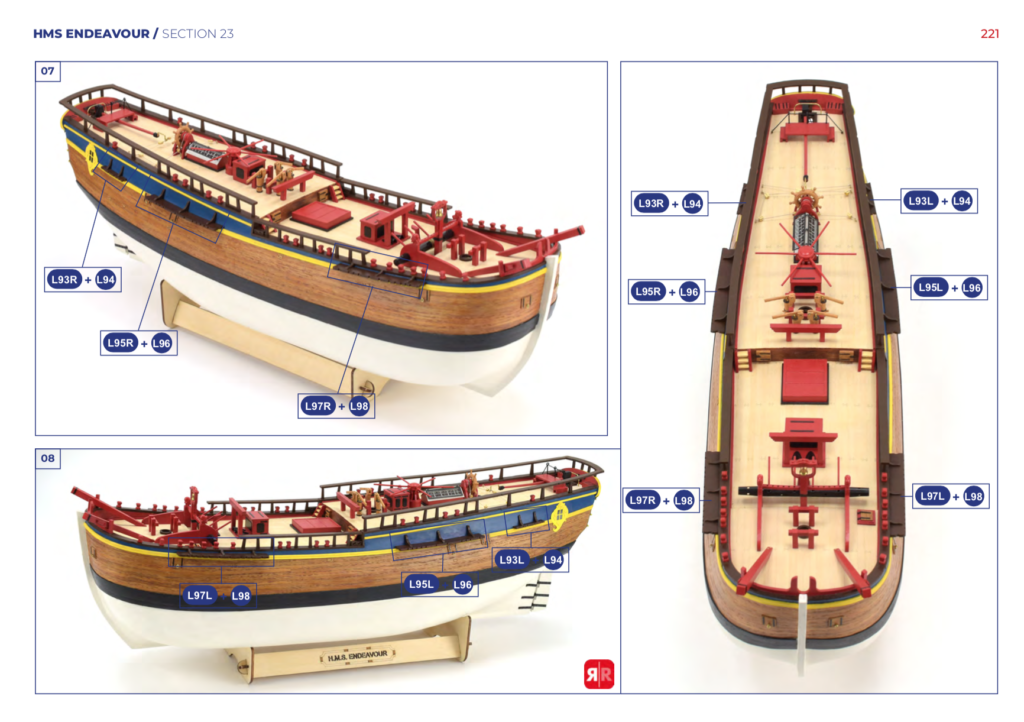 HMS ENDEAVOUR SHIP MODEL MADE OF WOOD: PAINTS AND FIGURINES

For sale separately, the HMS Endeavour wooden ship model has a set to achieve the best finishes and to further highlight its majesty. On the one hand, the modeler can already find its exclusive Paints Set on our website. 7 jars of 20 ml each with quick-drying water-based acrylic paints. Its colors: off-white, off-black, bright red, royal blue, deep yellow, buff, cocoa brown, gold and burnt umber. 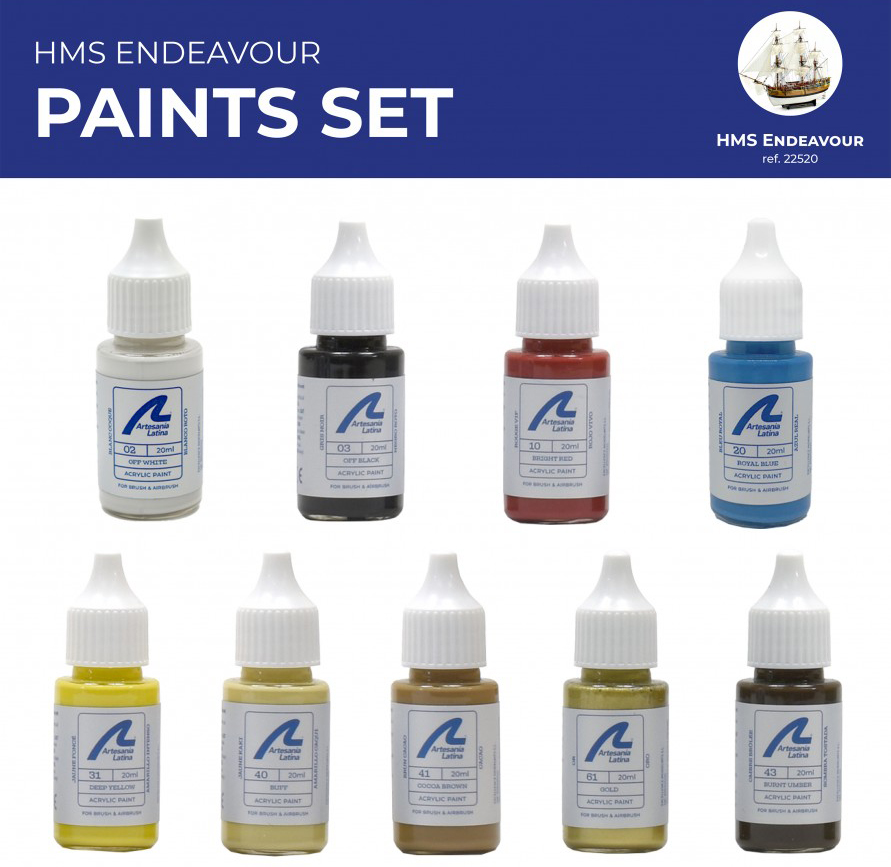 On the other hand, you can add even more life to your ship model of the HMS Endeavour thanks to the Set of 14 Figurines and 6 Accessories in Metal to be assembled and painted.

We also have paints for the figurines! You can choose between using the Basic Set or the Advanced Set. Do not hesitate to buy these acrylic water-based paints separately.

ESSENTIAL MICRO TOOLS FOR MODELING: ASSEMBLE YOUR HMS ENDEAVOUR SHIP MODEL WITH ITS HELP AND PRECISION

When you are building the HMS Endeavour ship model kit, small modeling tools come in handy. They greatly facilitate the work of the modeler. But they also allow jobs that require much more precision. With the Micro Tools for Modeling, made by Artesania Latina, you will be able to assemble your scale model more comfortably and quickly.

With the Micro Shapers you can treat the wooden strips to give the boat another touch of quality, which differentiates us from other companies in the sector. 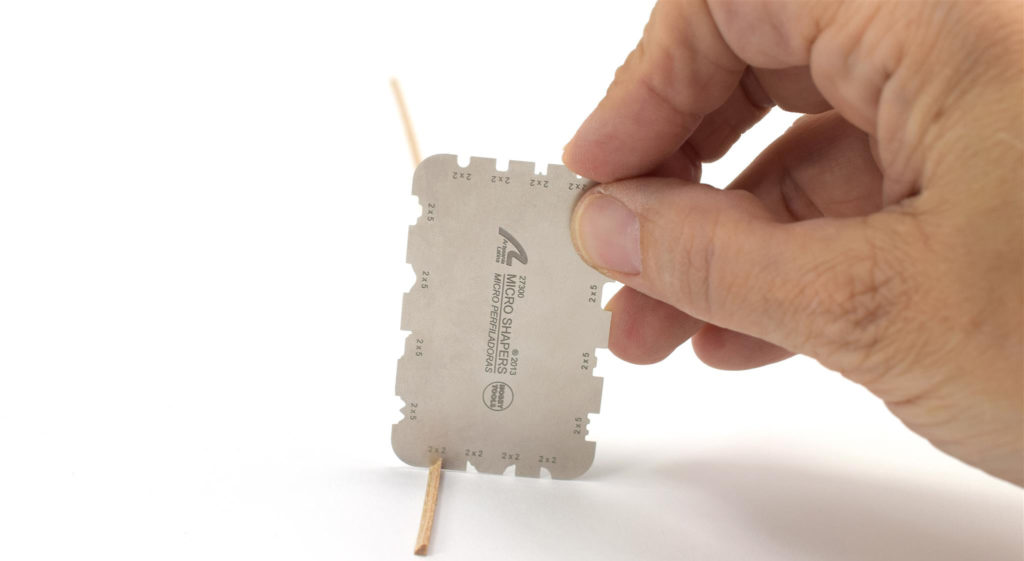 The Micro Rigging Tools will make the assembly of this part of the model more comfortable. They are very welcome. As you proceed, more threads are inserted and, sometimes, it becomes a bit annoying task if not for these small tools. 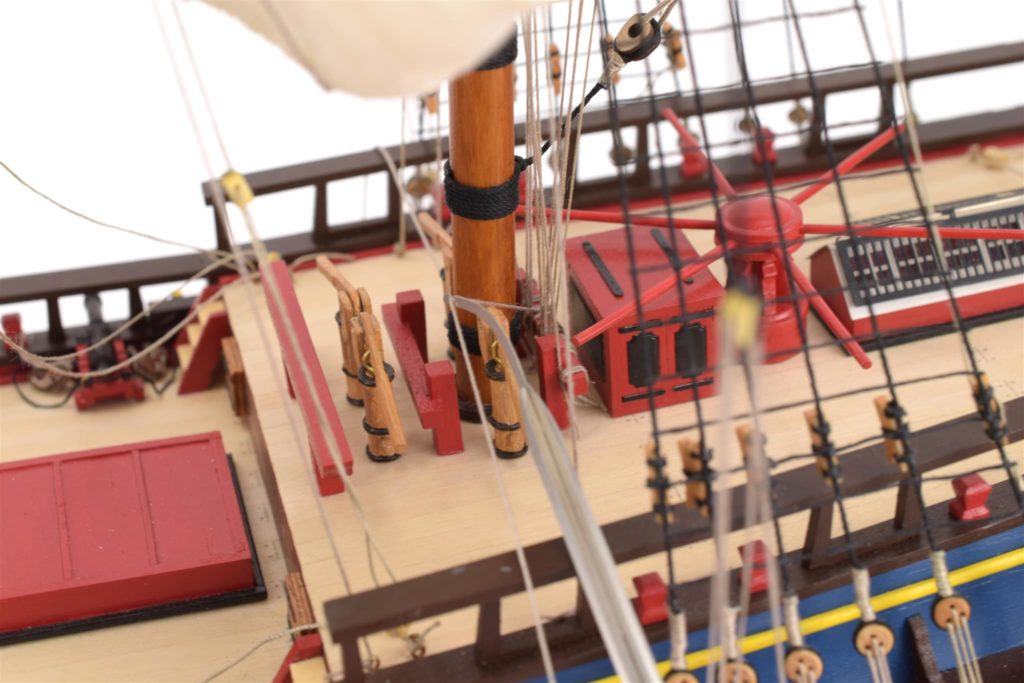 In this 1/65 scale ship model of HMS Endeavour we used Micro Easy Ratlines Templates for the first time. Do you want to quickly create the ratlines? This is your chance! With the 5mm (27310), 6.5mm (27311) and 8mm (27312) measurements, it can cover a large number of ship scales metrically speaking. 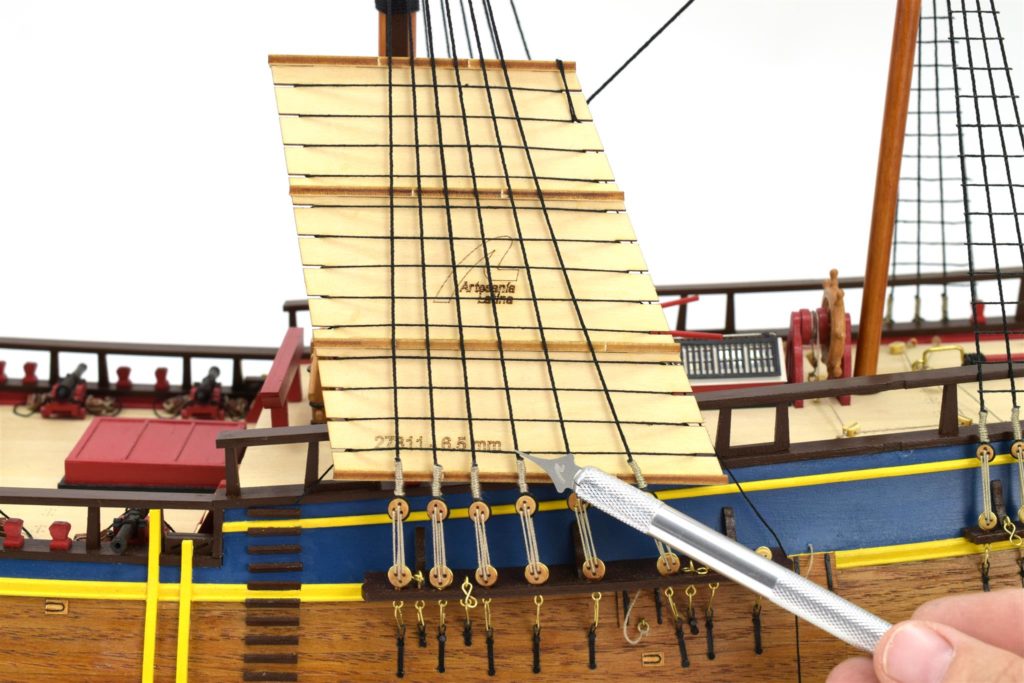 Finally, indispensable for the construction of the new HMS Endeavour ship model are the cyano applicator and the micro saws, not forgetting the magnificent micro rulers. These small tools are very useful when working in areas that are difficult to reach with larger tools. 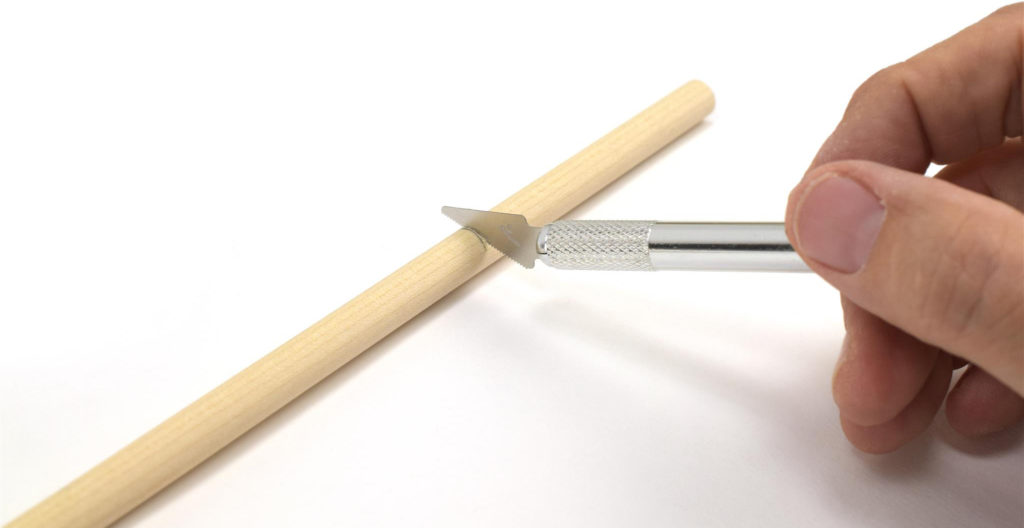 Finally, we can only recommend that our modeling friends visit the HMS Endeavour product sheet. Build this masterpiece of naval modeling for hobbyists with an intermediate level. You will enjoy your favorite hobby, for sure!