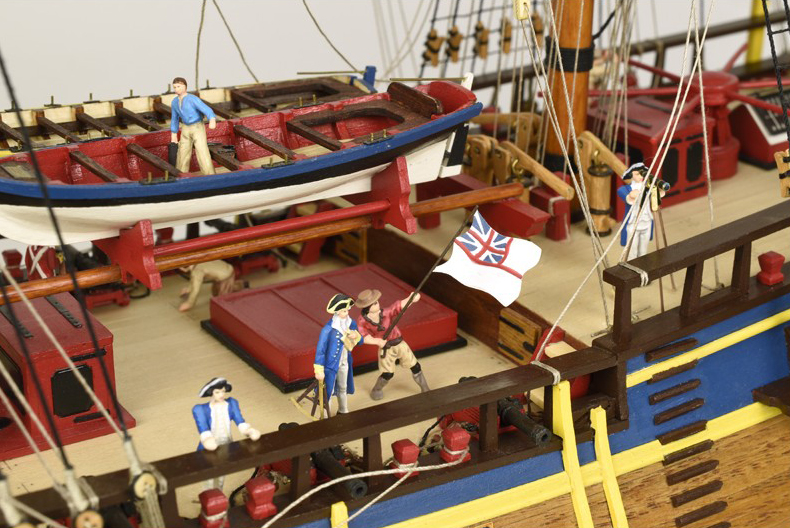 During the last months, Artesania Latina team has tried to provide our client friends with all the necessary products so that they can assemble, paint and decorate their scale model ships. In this sense, one of the primary objectives that we have set ourselves is to bring naval scale models to life, give them a human touch. And what better way to achieve this goal than with our sets of figures for model ships, with the crews and passengers of various ships. Made of high quality metal, the figures are presented in elegant packaging, and must be assembled and painted handly. Let the skill and art of the modeler come to the next stage at your workshop! 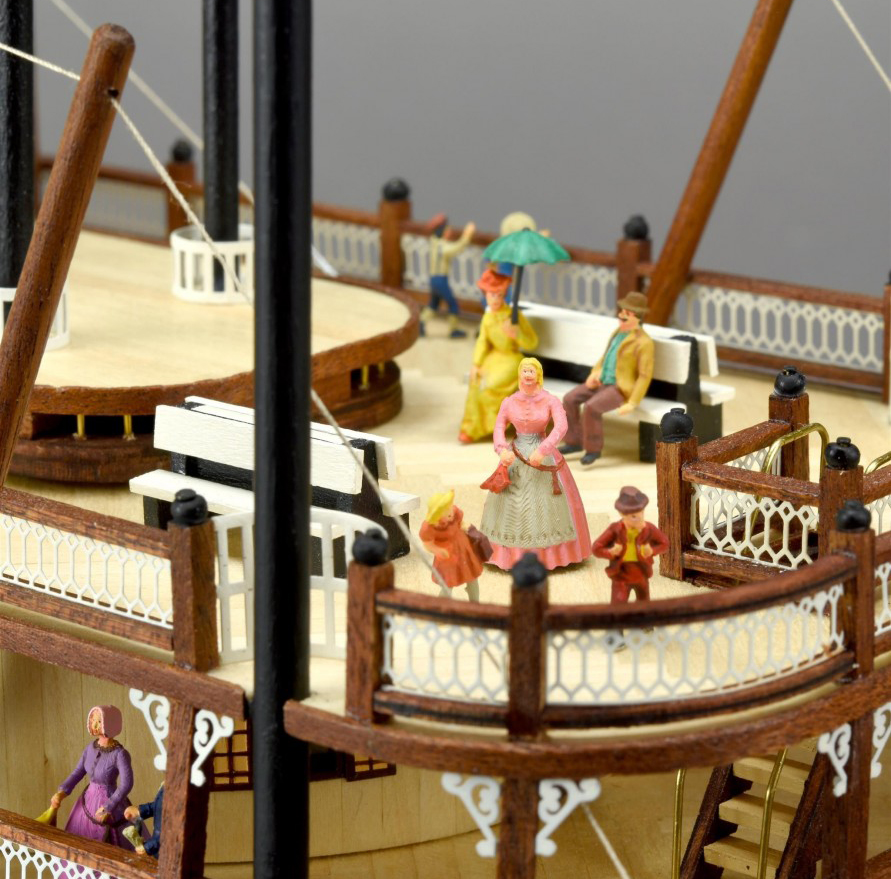 In this way, we have presented four new sets of figures for model ships with which the modeler can decorate different miniature naval replicas of Artesania Latina. Firstly, the 10 metal figures for Caravels and Galleons. Secondly, the one that contains 18 metal figures for the paddle steamer King of the Mississippi. Thirdly, the 14 figures with metal accessories for the British ship HMS Endeavour. And finally, the reinstatement of the set of 14 metal figures of the French Navy. Likewise, we cannot forget that we also offer modelers individual figures of 1.062” (27 mm) -captain, helmsman and sailor-. 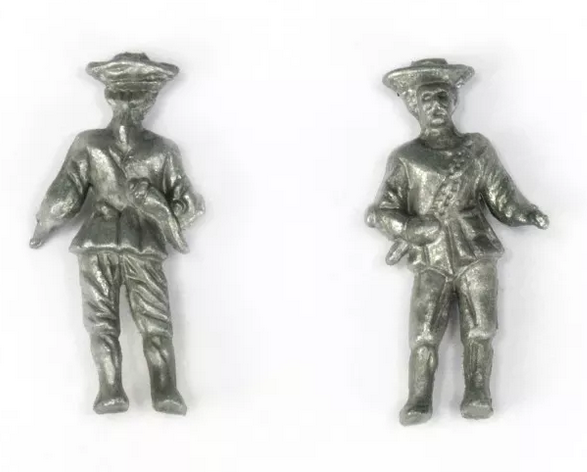 To achieve even greater realism in the models of caravels and galleons, don’t miss the set of 10 1/65 scale metal figurines (22411F). Bring in the crew members, ready to be assembled and painted. This includes the following characters and ranks, all of them involved in the great world historical deed of the Discovery of America. Christopher Columbus, Juan de la Cosa, Martín Alonso Pinzón, Vicente Yáñez Pinzón and Rodrigo de Triana. To which we must add 5 common sailors. 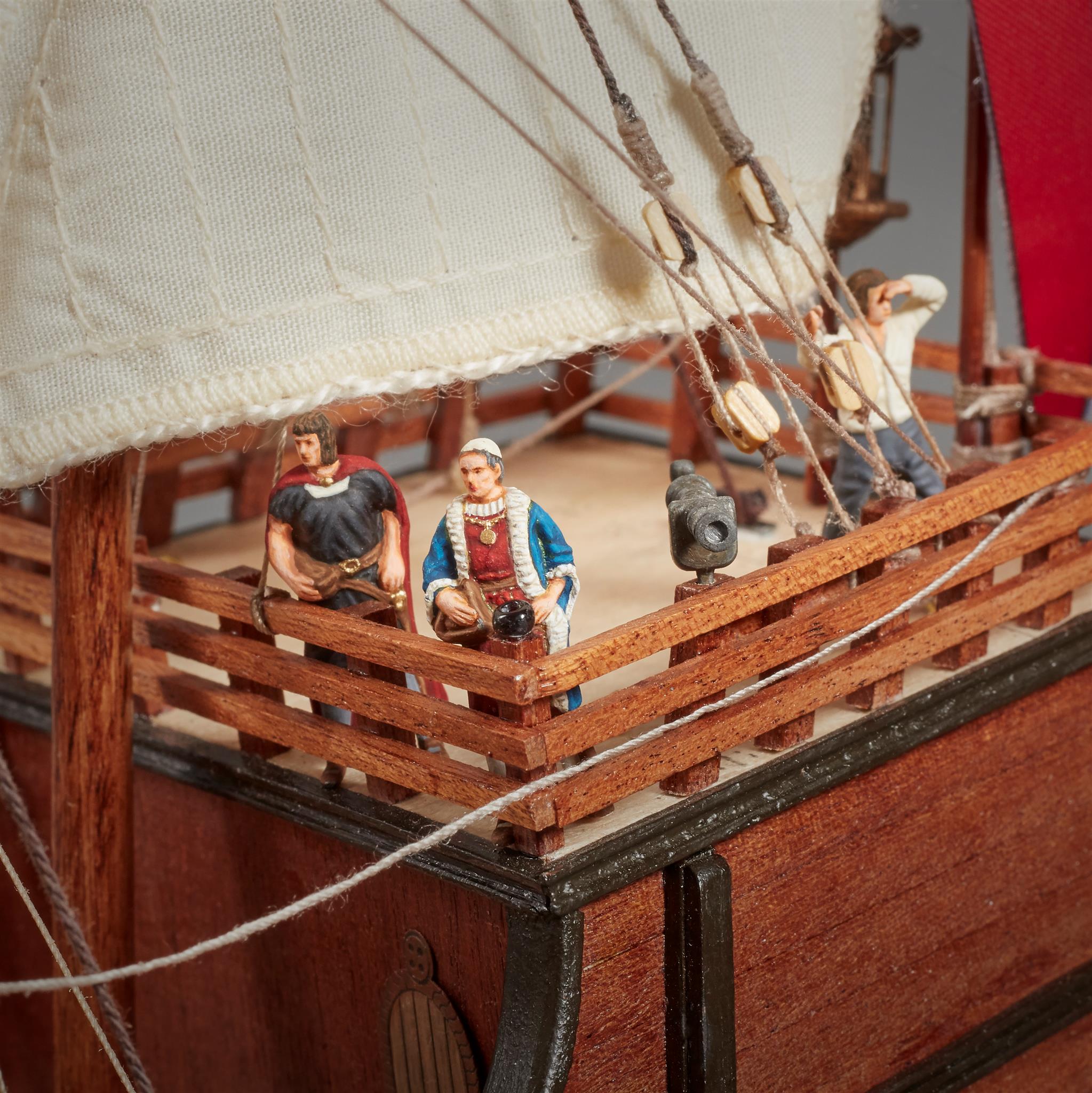 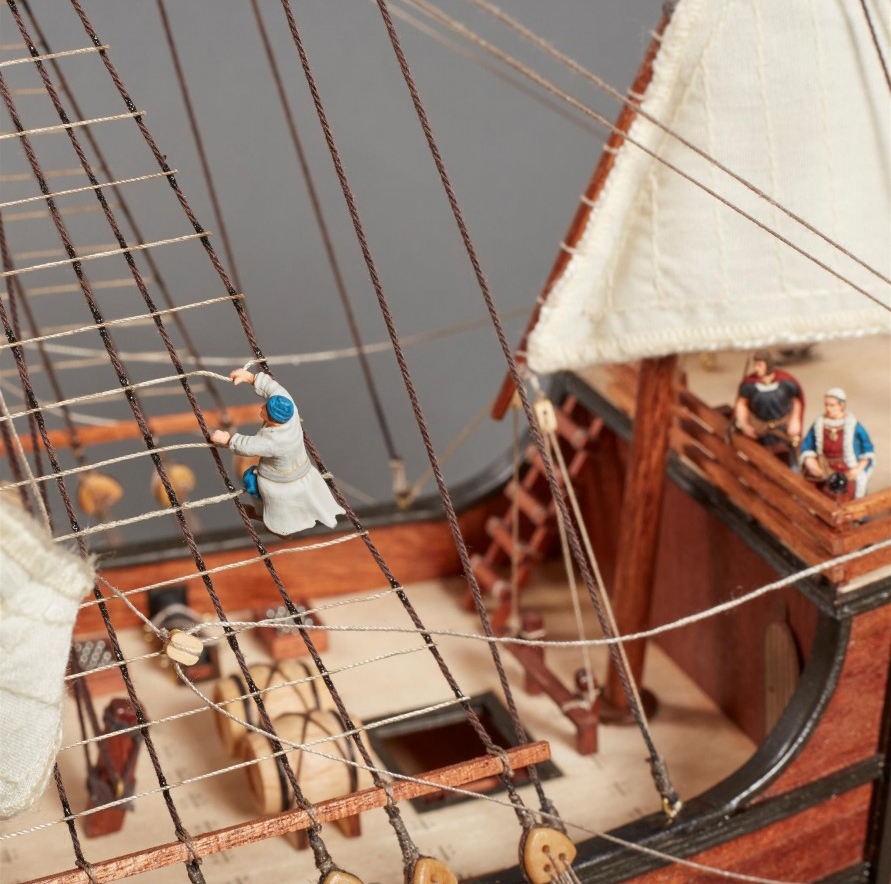 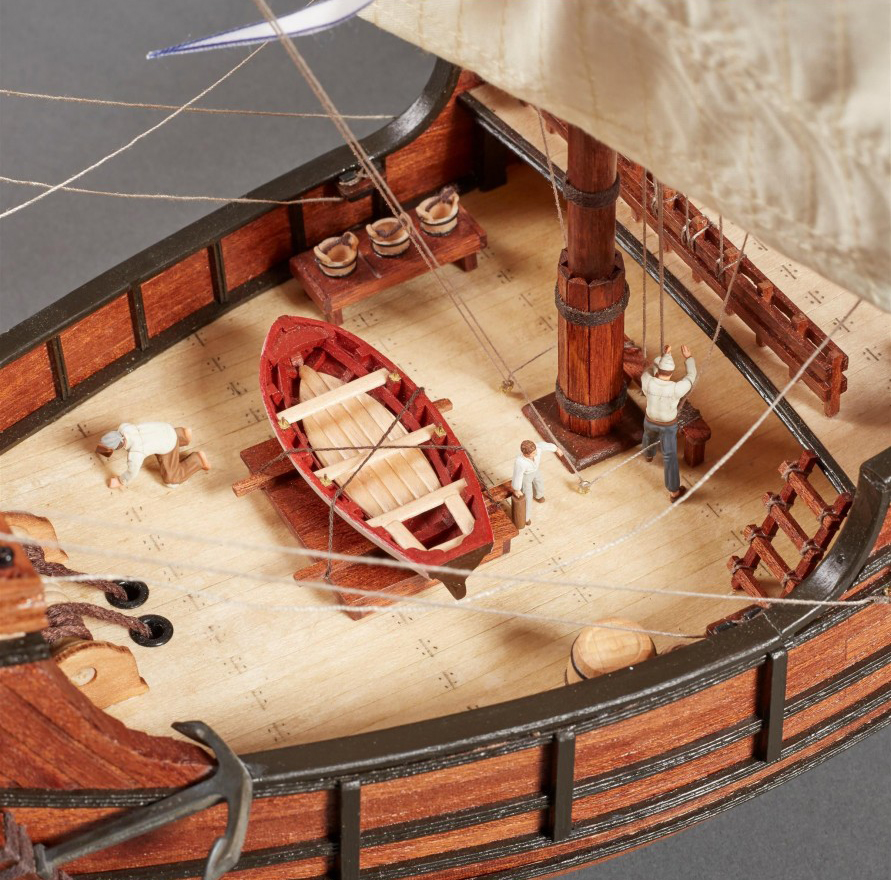 Discover with us all the details of this set of figurines by watching the video below.

FIGURES FOR KING OF THE MISSISSIPPI PADDLE STEAMER MODEL (20515F)

The following set of figures for model ships that we have recently put on sale is the one aimed at the faithful naval replica of the paddle steamer King of the Mississippi (20515F). It contains 18 metal figures to assemble and paint at 1/80 scale for the renewed wooden model of the aforementioned North American vessel (20515). Also for naval miniatures that have similar measurements since the figures measure between 0.984” (25 mm) and 1.181” (30 mm). They are distributed in 14 characters, including the crew and passengers, and in 4 animals, with 2 horses and 2 cows.

At the beginning of the 19th century, the first steamship, called the Clermont, was launched. It ran along the Hudson River to go from New York to Albany. Also, it was the first ship to carry out a regular transport journey for the public. It was not the first, however, to use paddle wheels. That gift went to the ships that sailed the Mississippi and Missouri rivers. Now you can humanize your scale model with this magnificent set of figures made of metal for King of the Mississippi model ship. 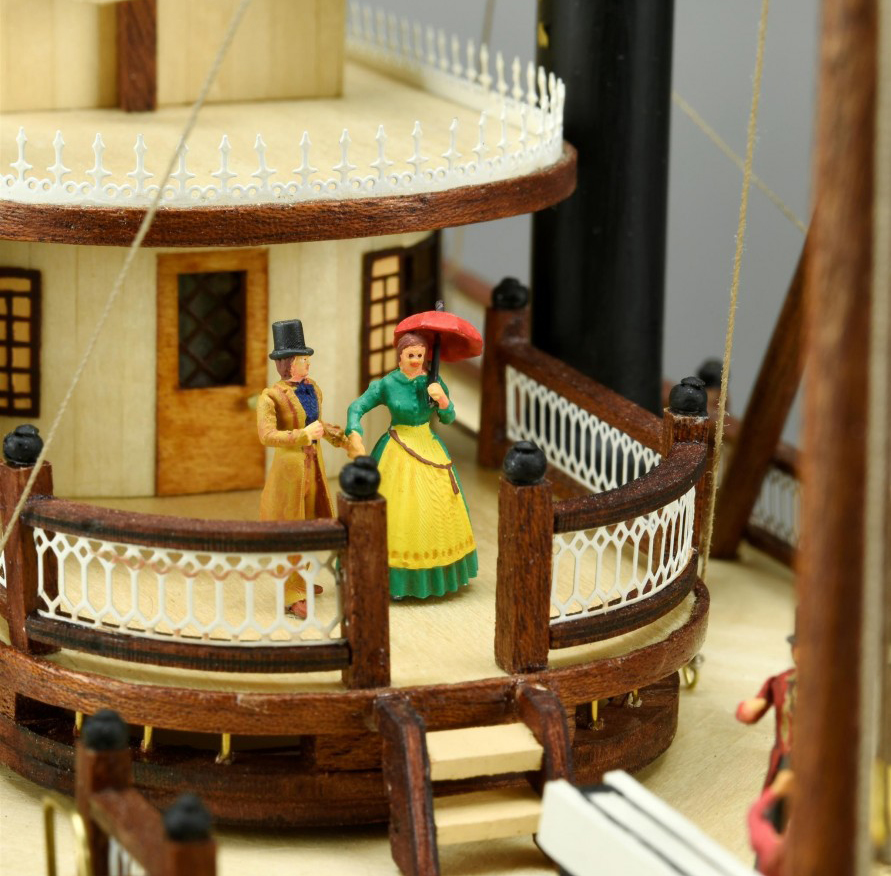 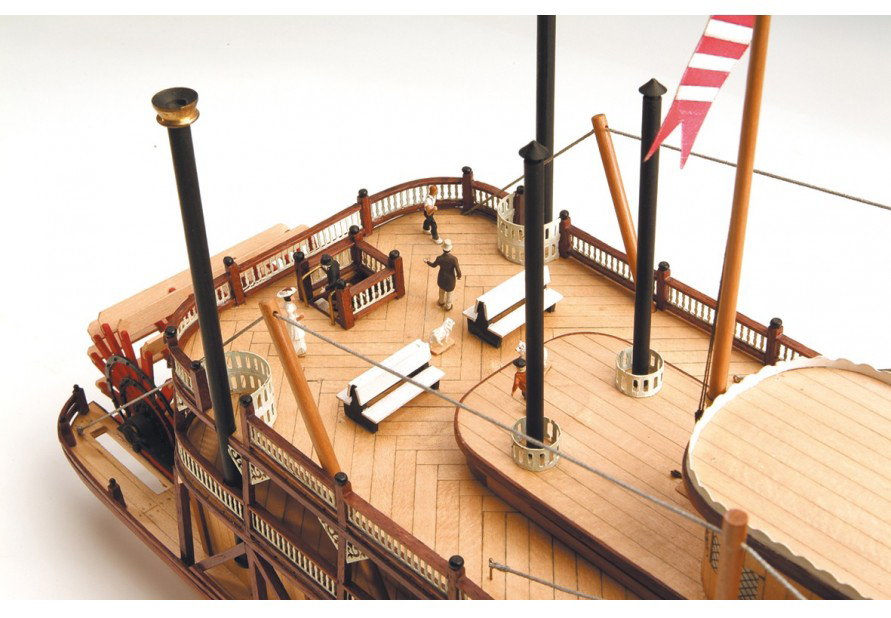 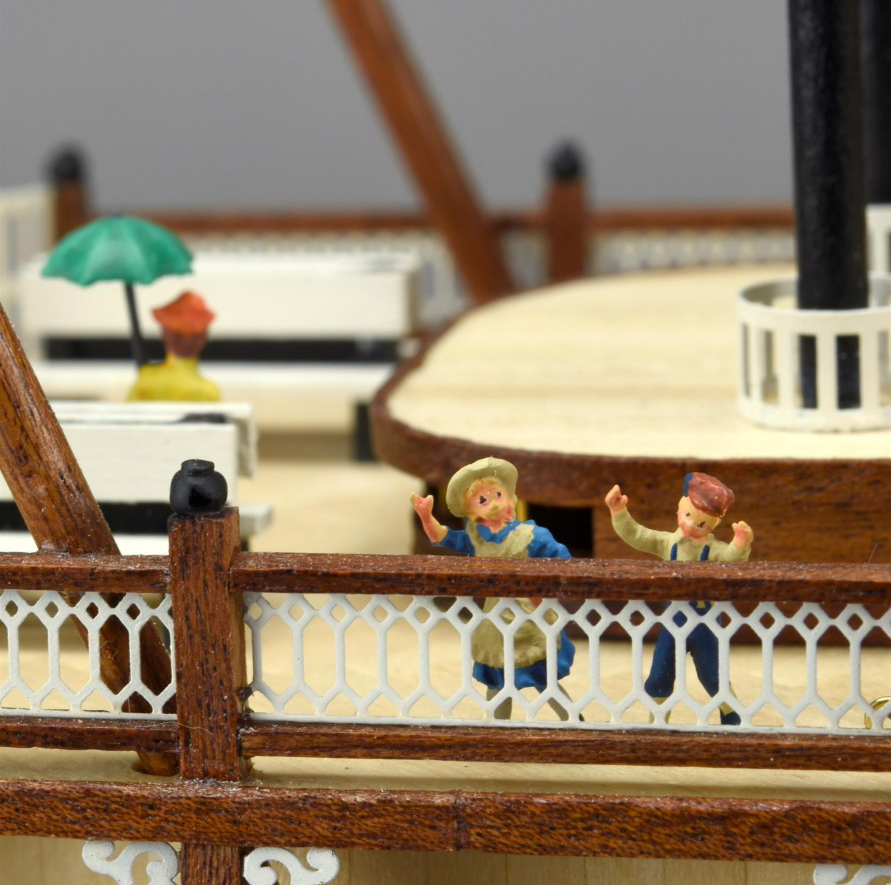 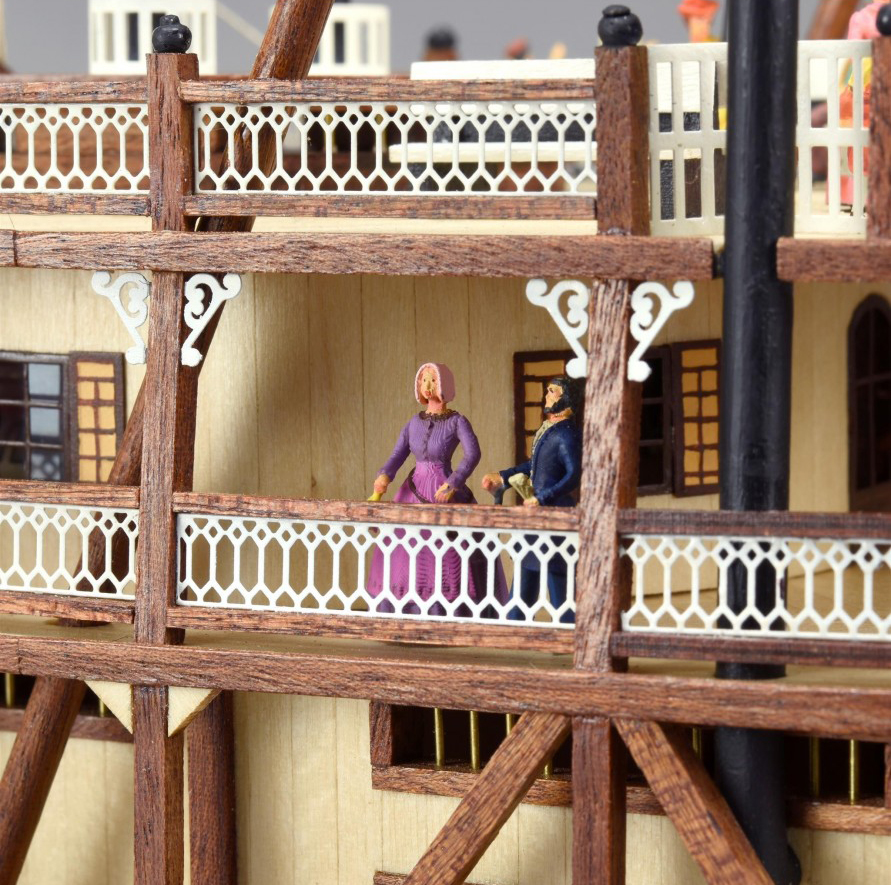 The latest news from ArtesanIa Latina in terms of figures for ship models is the set of 14 figures and 6 accessories for the British vessel HMS Endeavour (22520F). Made of high-quality metal, the human miniatures measure between 0.984” (25 mm) and 1.181” (30 mm). It has to be assembled and painted. James Cook and the rest of the crew can now step back on the deck of their ship. The set brings 14 characters for the scale model of HMS Endeavour (22520): Captain James Cook, 3 officers, 2 riflemen, 7 sailors and 1 cabin boy. And 6 accessories: 1 sextant, 2 spyglasses (one with a tripod), 1 flag and 2 rifles for soldiers. 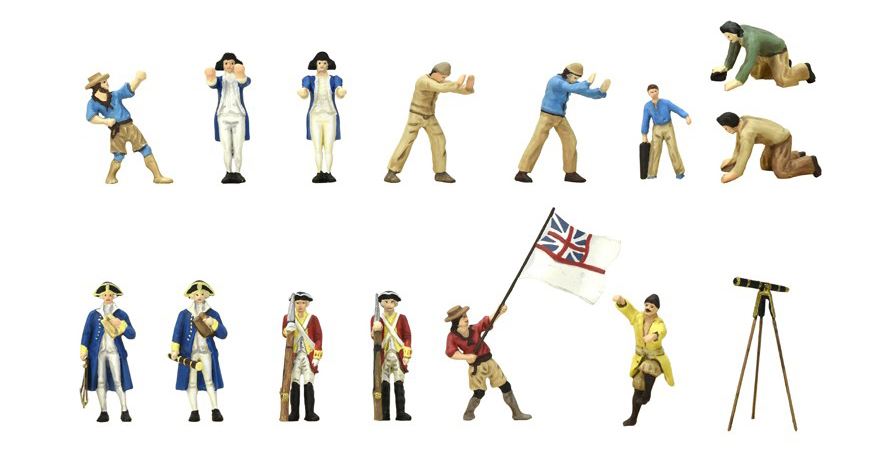 HMS Endeavour and the voyages it undertook with Captain James Cook were instrumental in providing input in navigation, seamanship and geographic exploration. It made it possible to calculate the position in longitude with high precision by means of mathematical formulas. Launched in 1764 and chosen by the aforementioned sailor four years later to prepare for his historic voyage, HMS Endeavor was part of important discoveries such as that of Australia. Also, it facilitated the location of Tahiti, New Zealand and many islands in the Pacific Ocean. In addition to making known animal and plant species hitherto unknown in Europe. 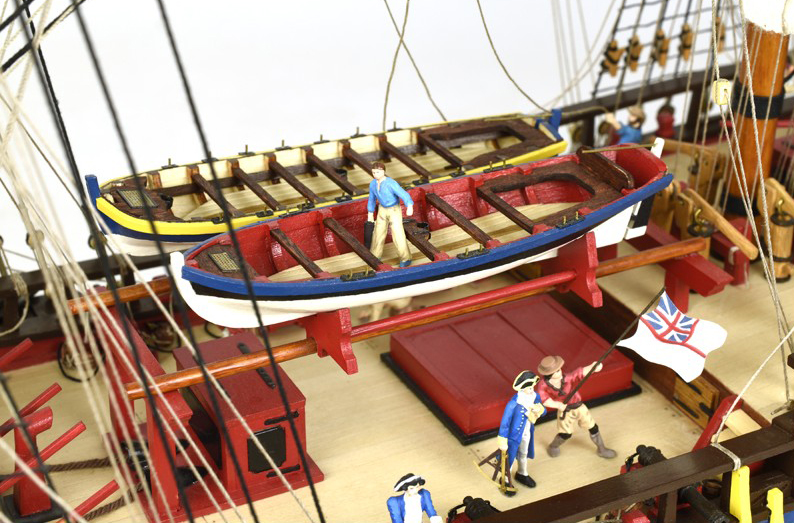 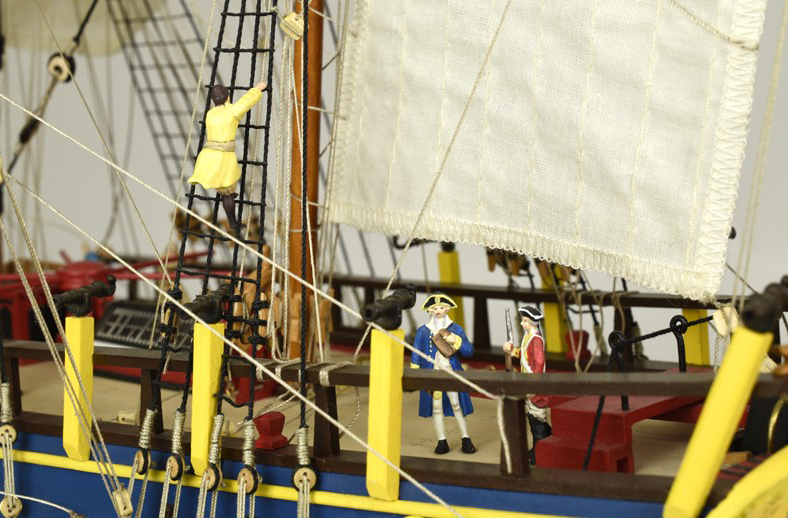 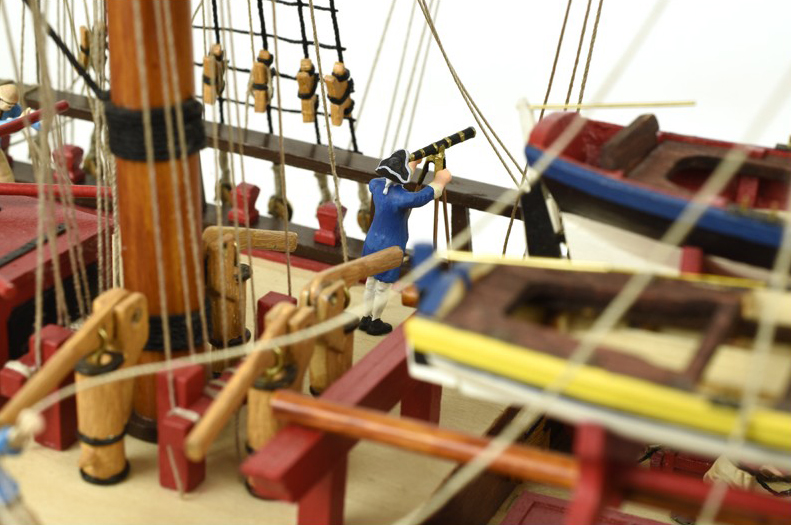 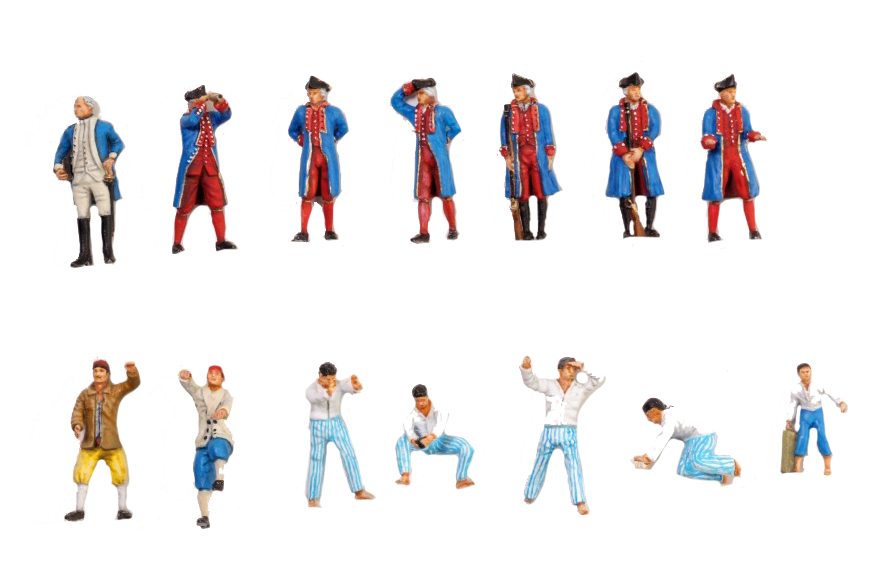 How to assemble and glue all these figures for model ships? Easy, ArtesanIa Latina offers everything you need. On the one hand, to stick the figures nothing better than our Dense Cyanoacrylate and Cyano Accelerator Spray (27650). 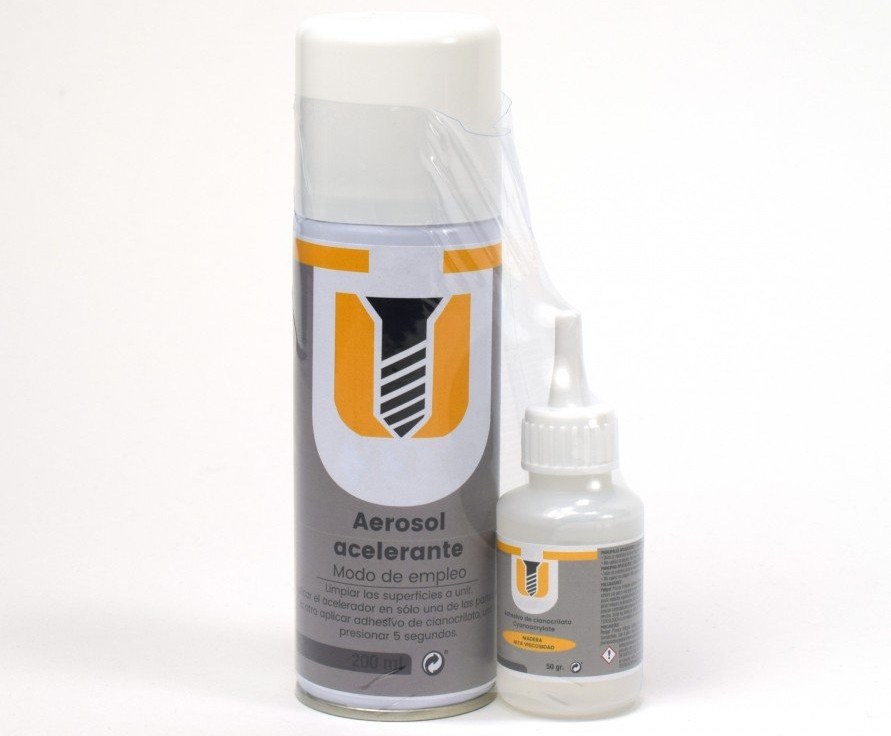 In addition, to paint any of the figure sets, the modeler has two options. On the one hand, the Basic Paint Set (277PACK14). Bring six cans of paint of 20 ml each with these colors. Off White, Off Black, Royal Blue, Deep Yellow, Vermilion and Basic Skin. 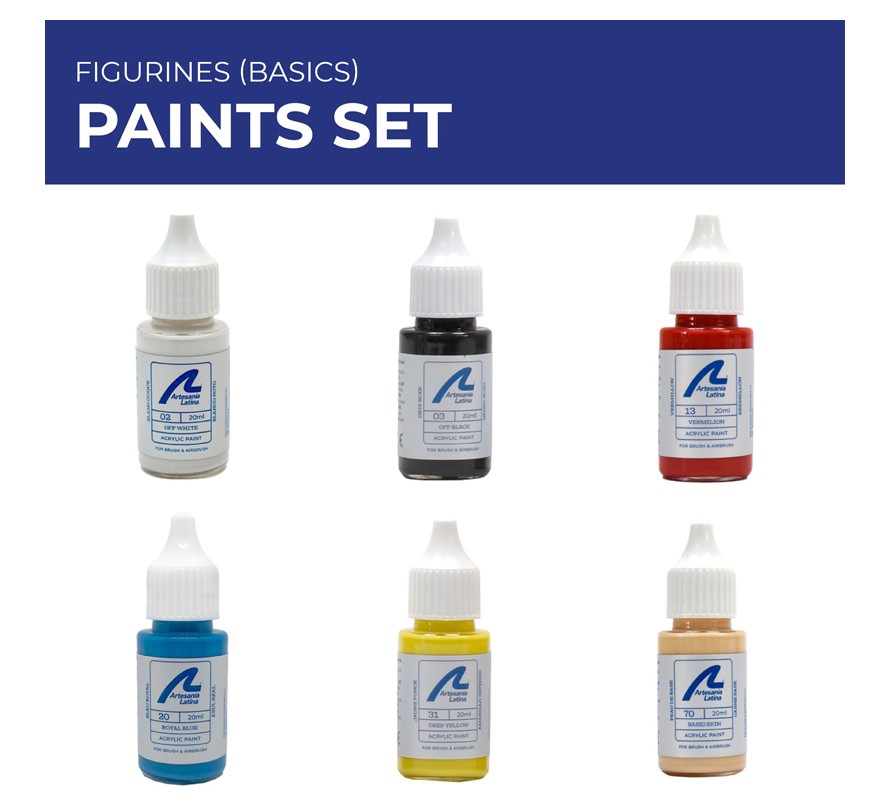 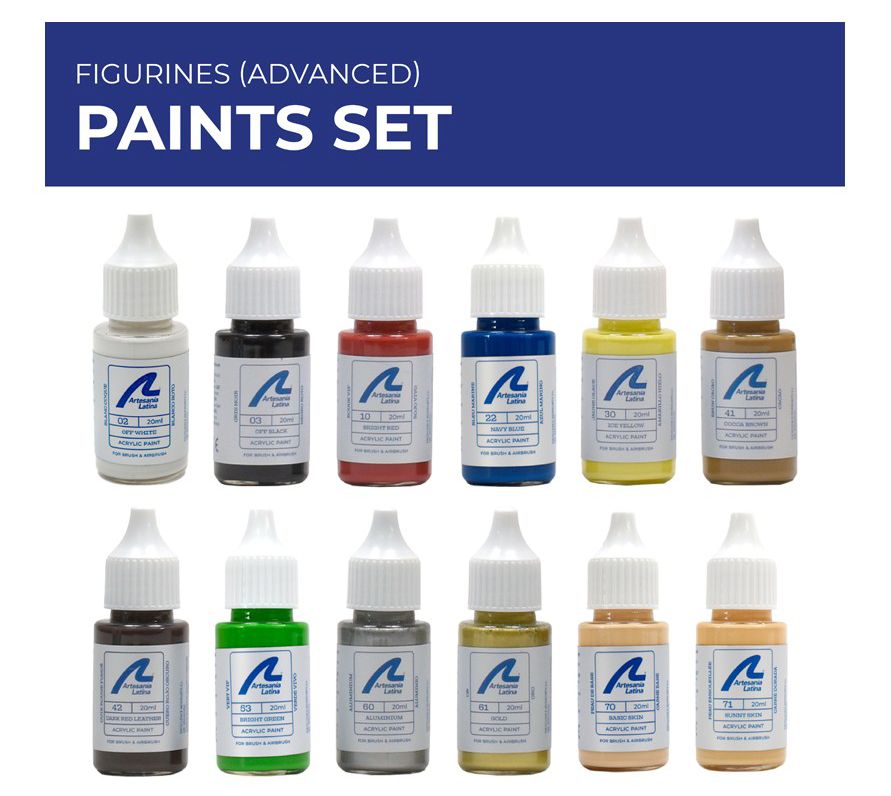 We recommend you using one of our airbrushes or airbrush sets, as well as several of our wide assortment of brushes, to paint the figures. You can also use our specific set of 4 brushes for figurines (17120). 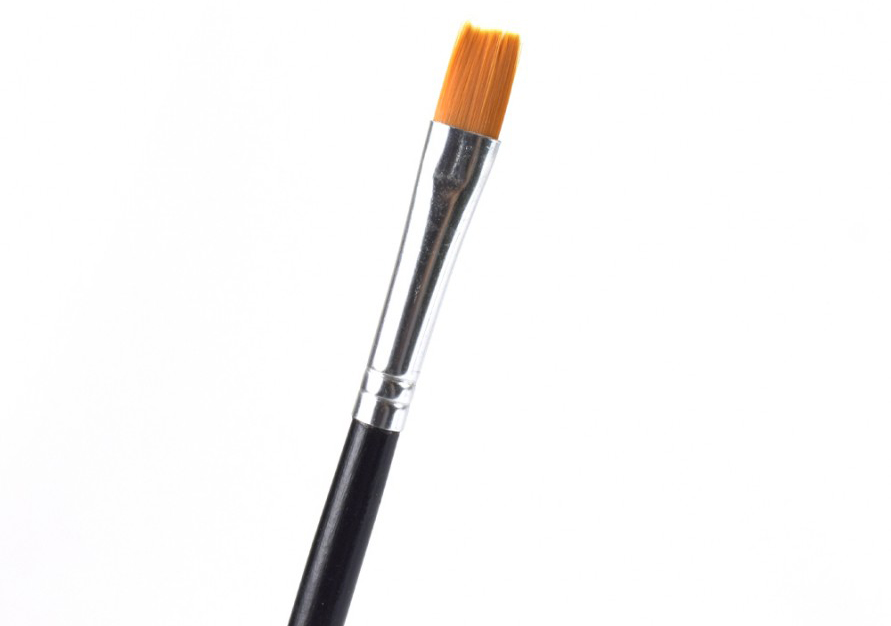 In short, you can now make your passion for naval modeling enormous thanks to the metal figures and their accessories. Essential for any self-respecting wooden model ship!