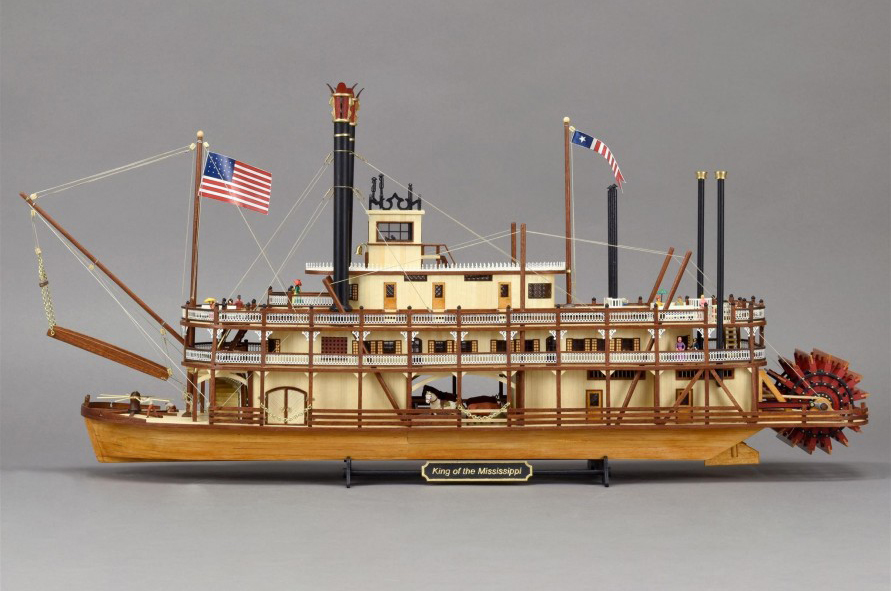 One of the scale models most desired by Artesania Latina friends has returned in 2021 with a renewed appearance and many improvements. The new King of the Mississippi paddle steamer model in wood, 1/80 scale, is a jewel of naval modeling. Next, we are going to detail all the novelties that this fantastic and classic steamboat model incorporates. 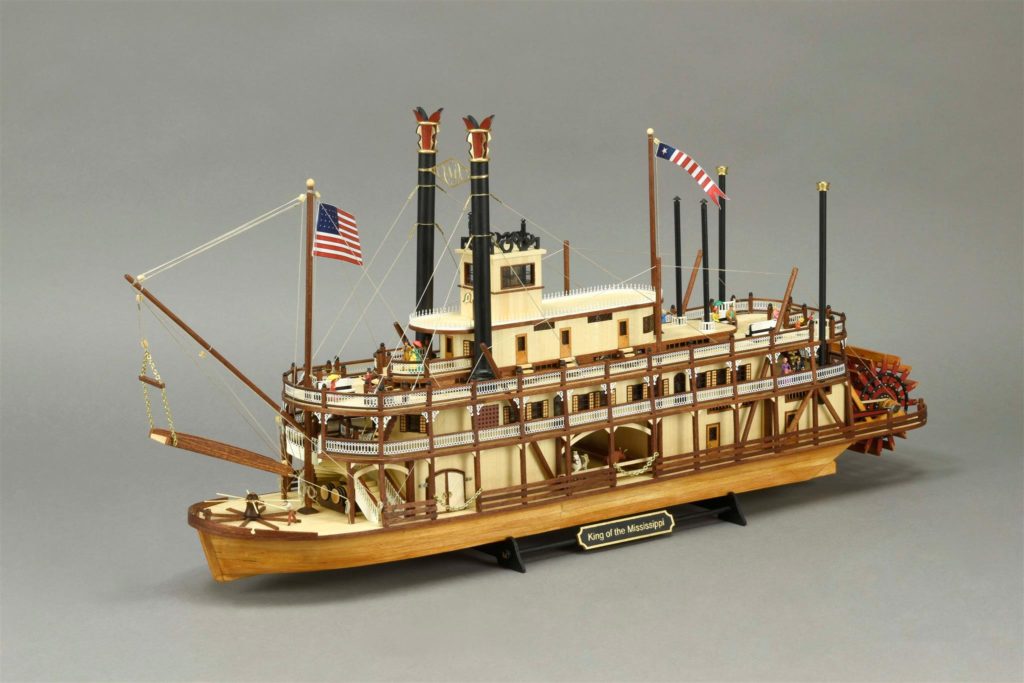 The 3D redesign and assembly process has been painstakingly developed over months by Artesania Latina designers and modelers. In this way, the miniature replica of the King of the Mississippi can be built very pleasantly. 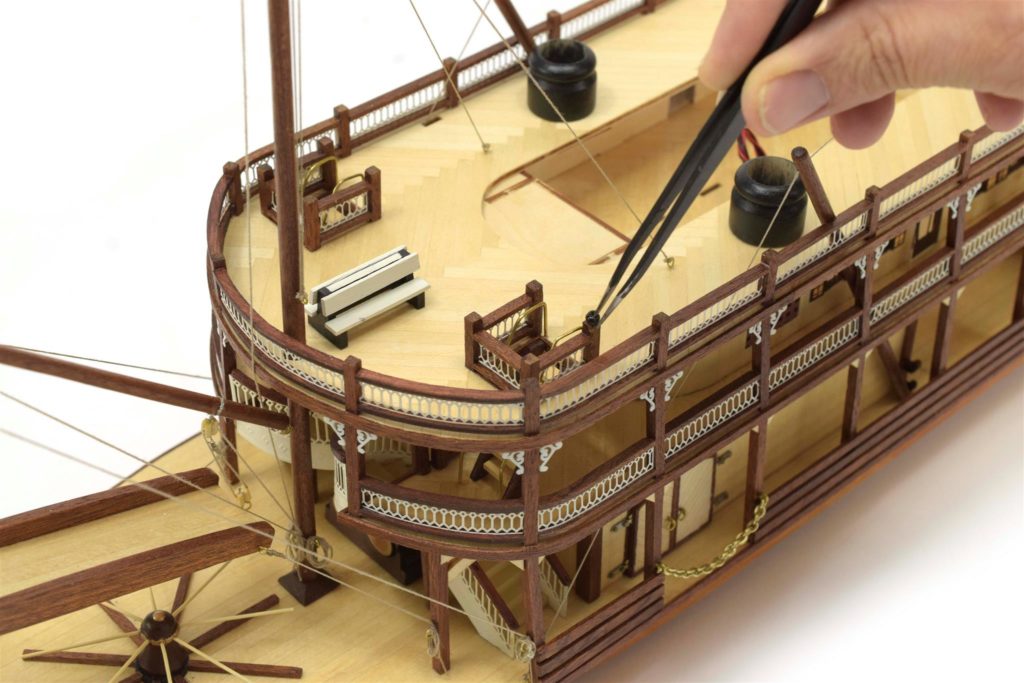 Among the improvements made, excellent step-by-step color instructions have been created, more elaborate than ever, in DVD format. The objective is that the assembly made by the modeler is enjoyable and precise. The construction process of this wooden paddle steamer model is explained in detail without any doubt. In this sense, 240 digital pages with hundreds and hundreds of photos accompanied by their explanatory captions support this fact. 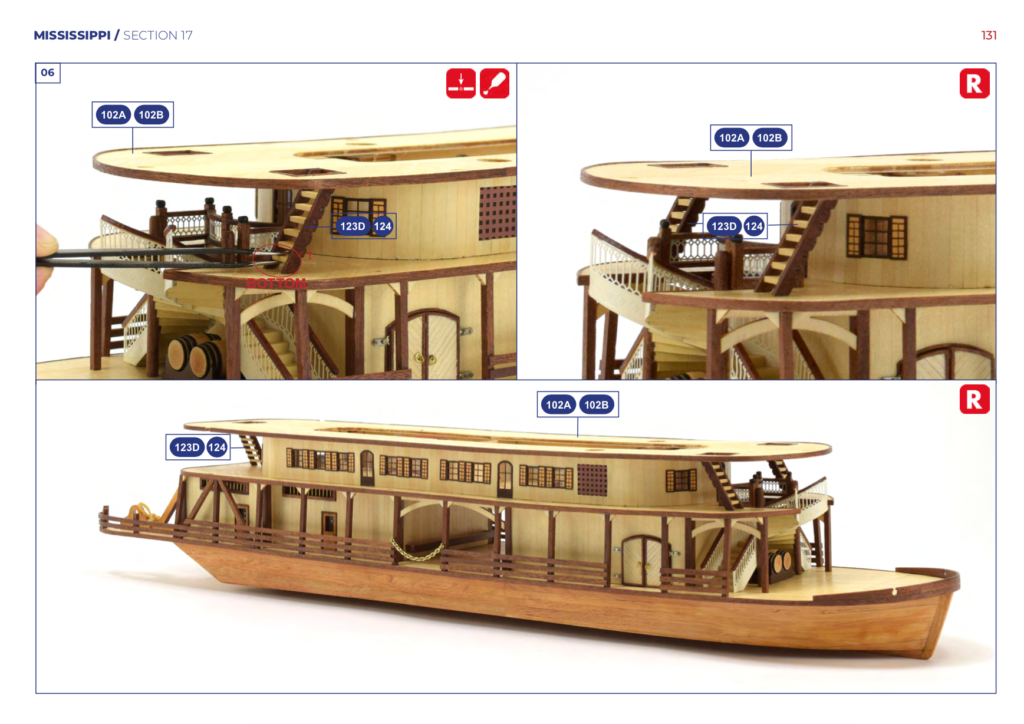 We cannot forget the numerous online video-tutorials that the modeler can find on our official YouTube channel. They will also save you from any possible trouble. Artesania Latina professionals have made a great effort for the modeler to enjoy naval modeling.

On the other hand, this impressive modeling kit is designed to the millimeter so that the parts fit together perfectly. So, once it’s built, it will look the way it deserves. All parts of hardwoods such as birch and linden are cut by high precision laser. It contains 8 board sheets! The parts of this wooden paddle steamer model are fully assembled. They fit easily in their right, concrete place, thus avoiding headaches. 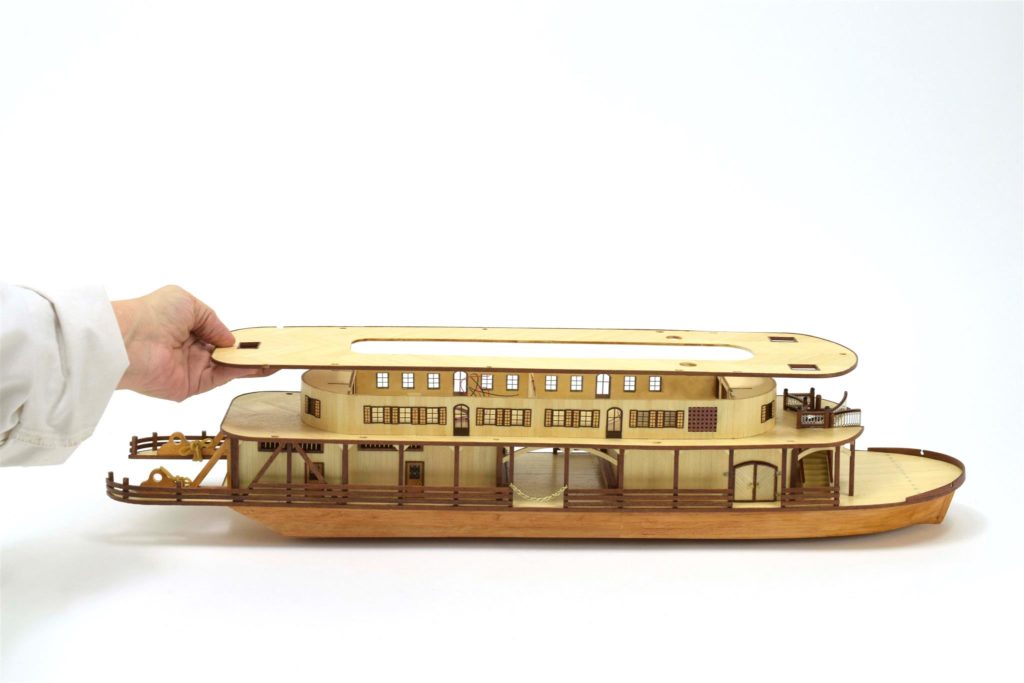 The King of the Mississippi paddle steamer model has also been extensively revamped in terms of photoe-etched parts. “This new scale model includes many more photo-etched parts, and much more detailed than the ones that belonged to the old model”, assures Artesania Latina designer, who adds that “windows, door windows, capitals, railings, decorative ribbon of the service chamber rof and stairs”. Contains 2 large photo-etched sheets (11.57” x 6.14” and 10.12” x 4.80”) with never seen before die-cast and brass decoration details. 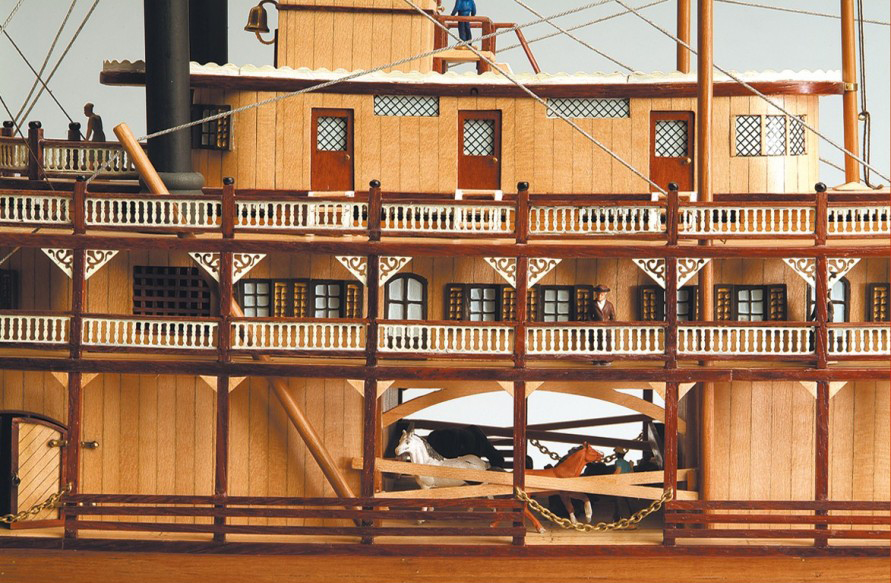 We start with the windows, which were previously opaque die-cast, and the windows in the doors. “They all now have a more elaborate design, are very easy to assemble and allow light to pass into the different compartments through the transparent acetate”, underlines the professional. 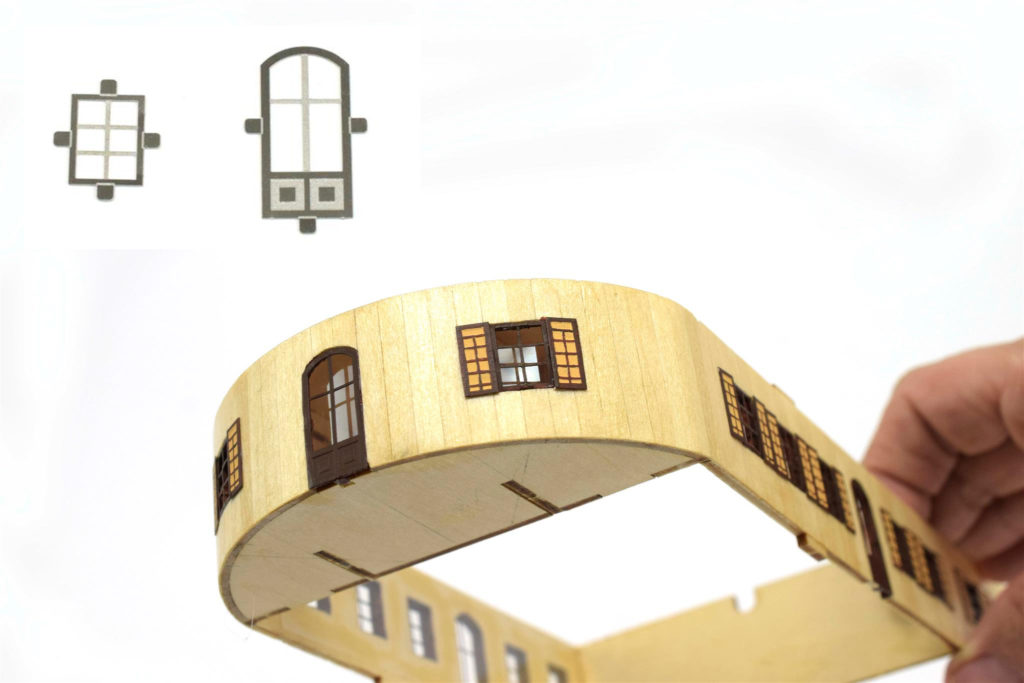 We continue with the ribbon that adorns the ceiling of the service chamber, the exterior railings and the capitals. They have been made much more stylized than the previous ones. The contrast of colors of these parts in white with the colors, dyes and varnishes used on floors and walls of the rest of the ship is spectacular. 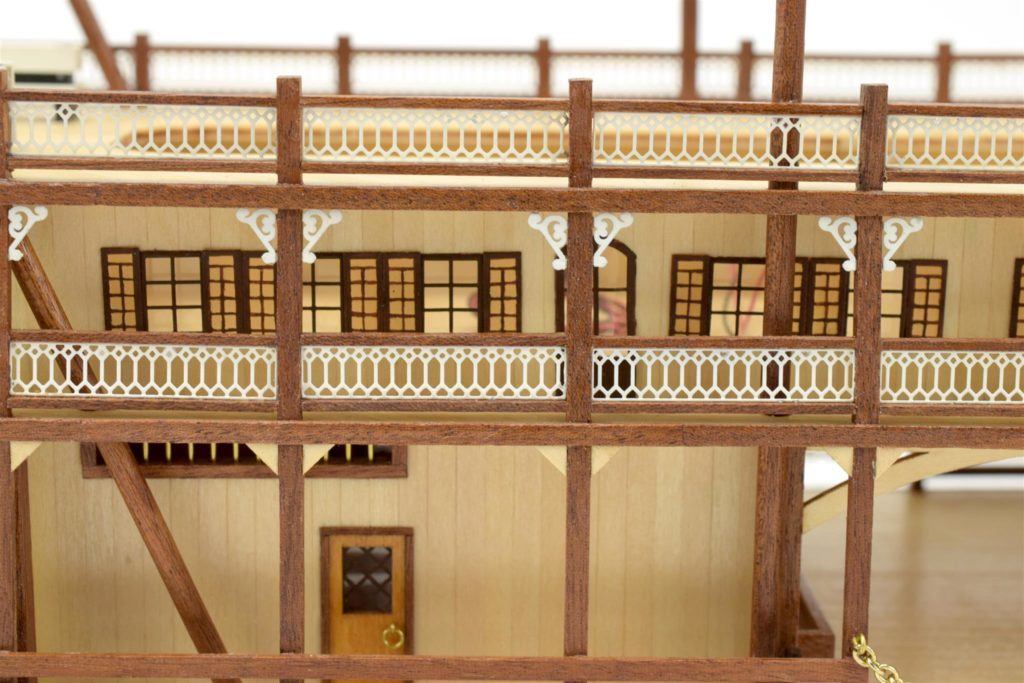 PHOTO-ETCHED DETAILS OF THE NEW STAIRS AND CAPTAIN’S CAB

Finally, the new photo-etched stairs of this 1/80 scale model “have been very popular”, according to the modeling friends who have had the kit in their hands. Compared to the old ones, their design is now much more delicate and they are easier to assemble. “Putting special care in painting, gluing and building the photo-etched – which makes up the railings – with the steps and handrails, the result obtained is simply extraordinary”, exclaims the designer. As it stands on the prow of the new King of the Mississippi wooden paddle steamer model, it stands out to the first-time appreciator. It’s a great cover letter! 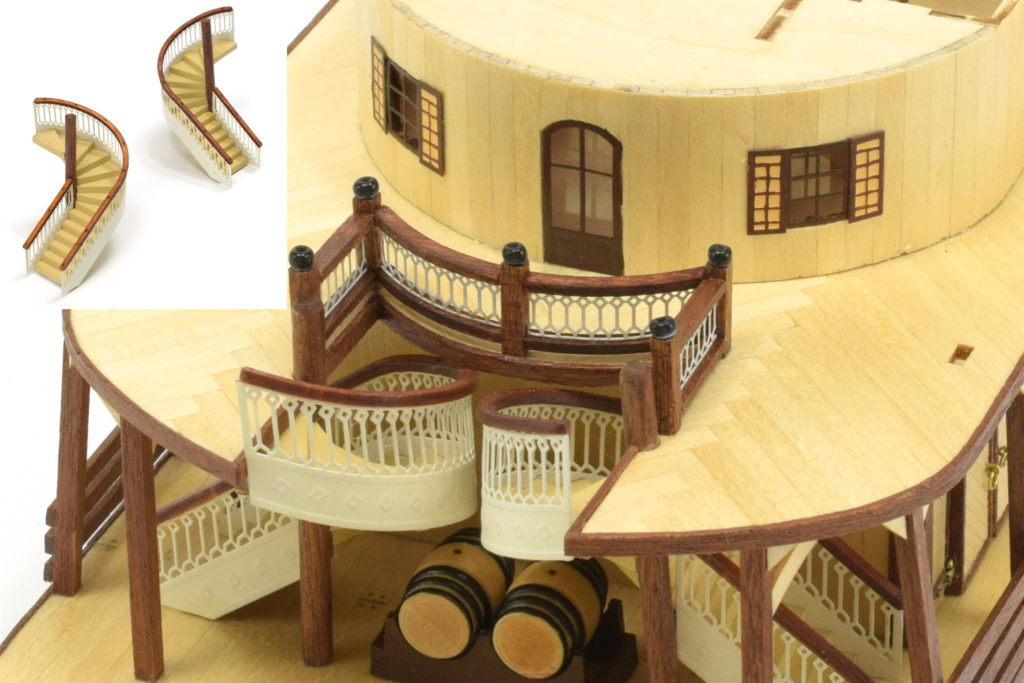 PRE-INSTALLATION TO ILLUMINATE THE MODEL WITH LED LIGHTS

One of the pleasant surprises of this beautiful wooden paddle steamer model is the improvement that has been made so that it has light, shine with its own light. “Small supports have been added in different compartments so that the modeler who wishes can add LED lights and bring to life the scale model of the King of the Mississippi,” explains our 3D designer.

As an informative note, Artesania Latina has, for sale separately, a Set of LED Lights with switch and battery holder, which allows you to play with the effect generated by the fixed lights or the candle effect. It looks like this, impressive! 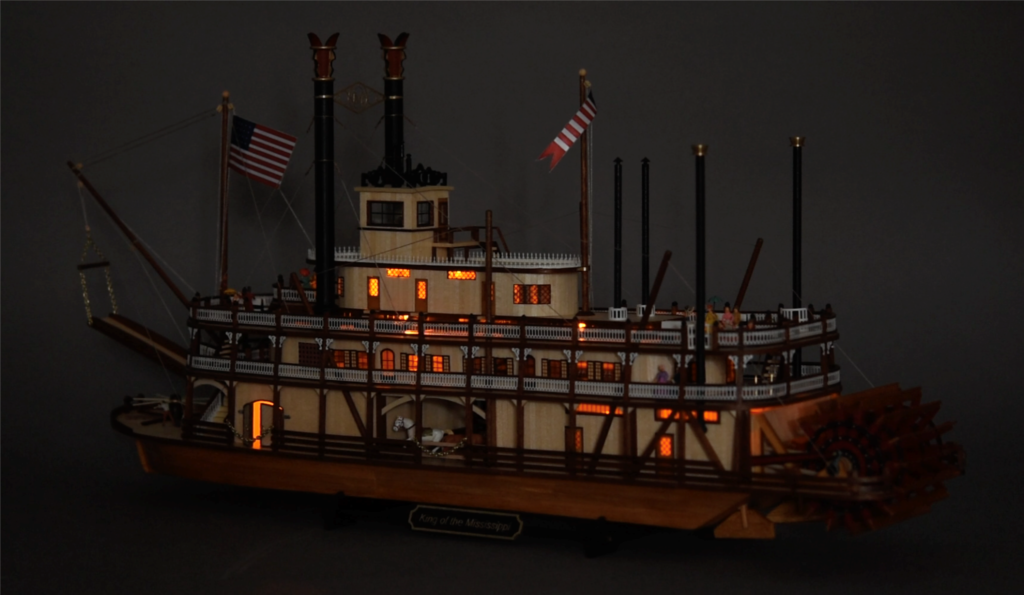 Other improvements applied to the new King of the Mississippi paddle steamer model made of wood are the funnels and the turbine. As for the former, the scale model has been designed so that if the modeler wants he can, on his own, make the funnels emit smoke. They are hollow.

Find an electronic smoke dispenser – not included in this modeling kit – and attach it to the steamboat model. As the service chamber is ‘detachable’, whenever it deems appropriate it will be able to access the interior of the cabin. There the bases of the funnels are housed to recharge the liquid tank that creates the smoke. 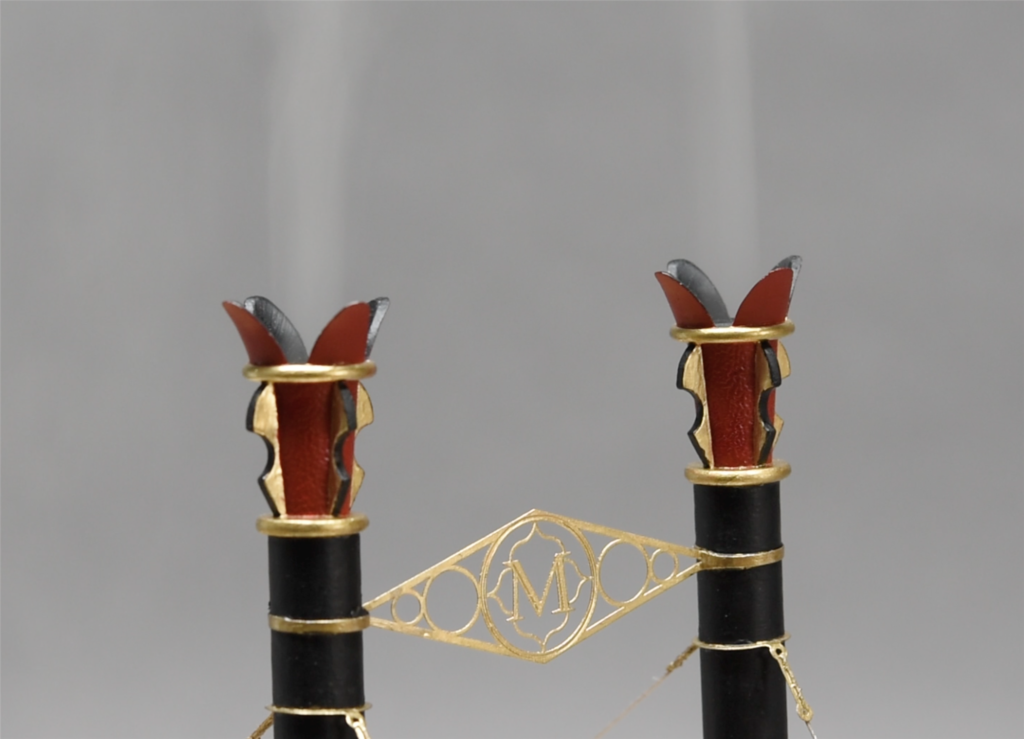 And what about the dazzling new mobile turbine, a dream come true! Our team greatly appreciated the ability to move the blades to recreate the motion of the turbine that pushes the real ship. Thought, planned and done. A system was devised that “allows a small engine to be attached to the stern wall and transmit power to the turbine by means of a rubber band and a pulley”, points out the model maker of the project. 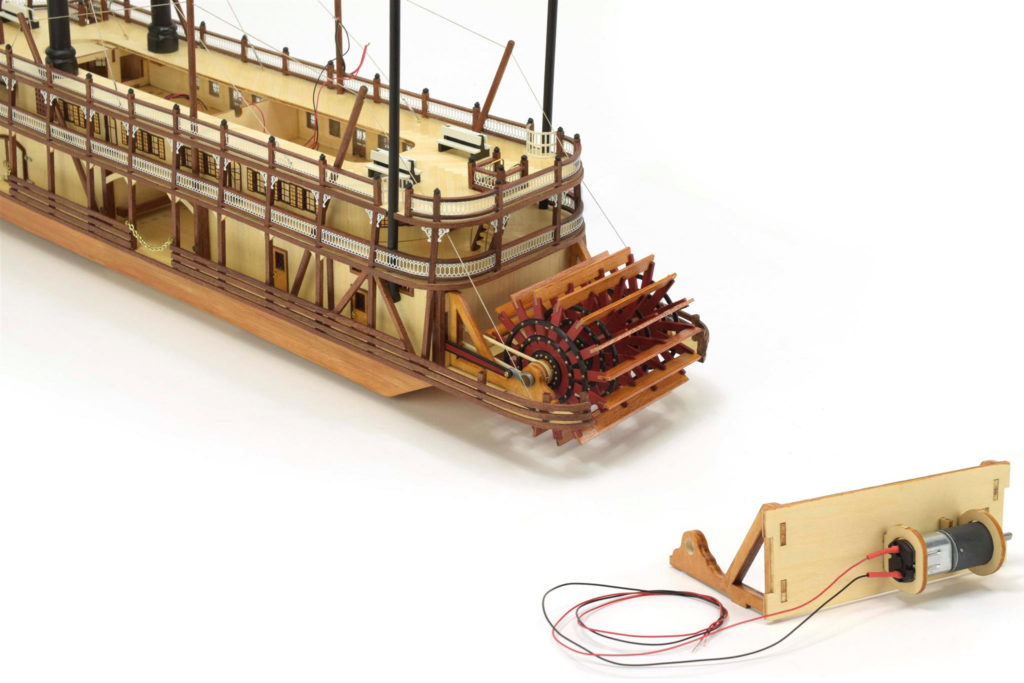 The entire set of aft wall + turbine supports + turbine is practicable. The modeler can thus access the interior and make adjustments to the motor or the rubber band. Should the rubber wear out in the distant future, it could be changed even when the model is finished. The Motion Motor Set (27591) is available for separate sale. 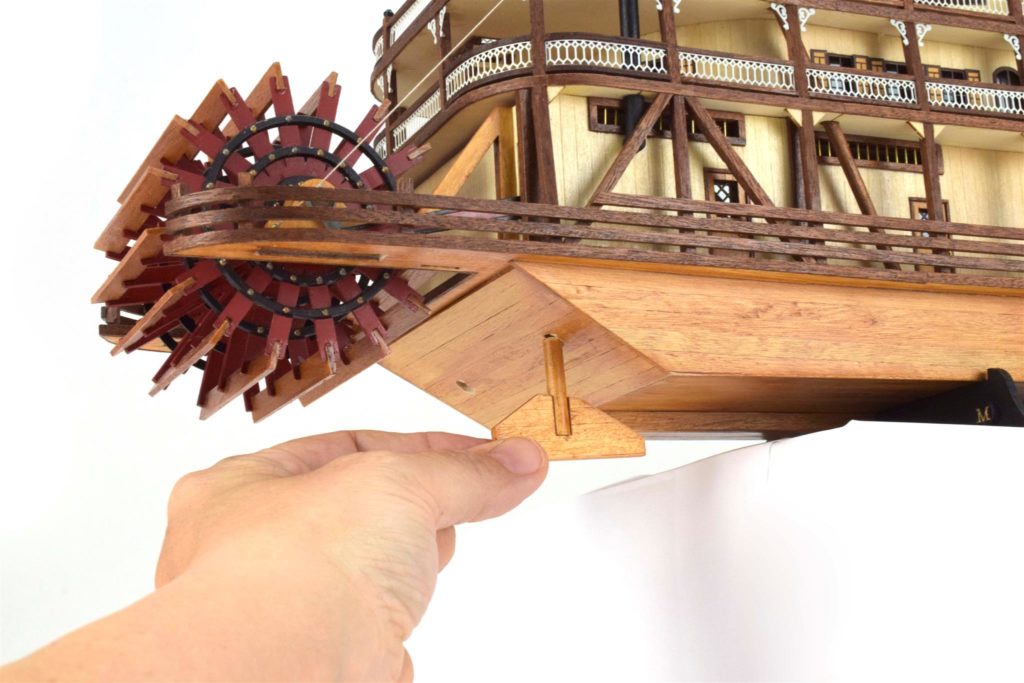 Seeing that our King of the Mississippi paddle steamer model made of wood has movement in its blades, light in different compartments and smoke coming out of the funnels will leave you totally speechless. In addition, its large dimensions, once built, also help to do this: 25.98” (660 mm) length, 11.81” (300 mm) height and 5.11” (130 mm) width. The modeling kit includes adhesive fabric flags and pedestal with nameplate. Build this world naval benchmark at your own modeler workshop!

Discover this artwork of naval modeling in wood on the video under these words:

Read the post about Figurines, Paintings, Finishes, Lights and Motor…