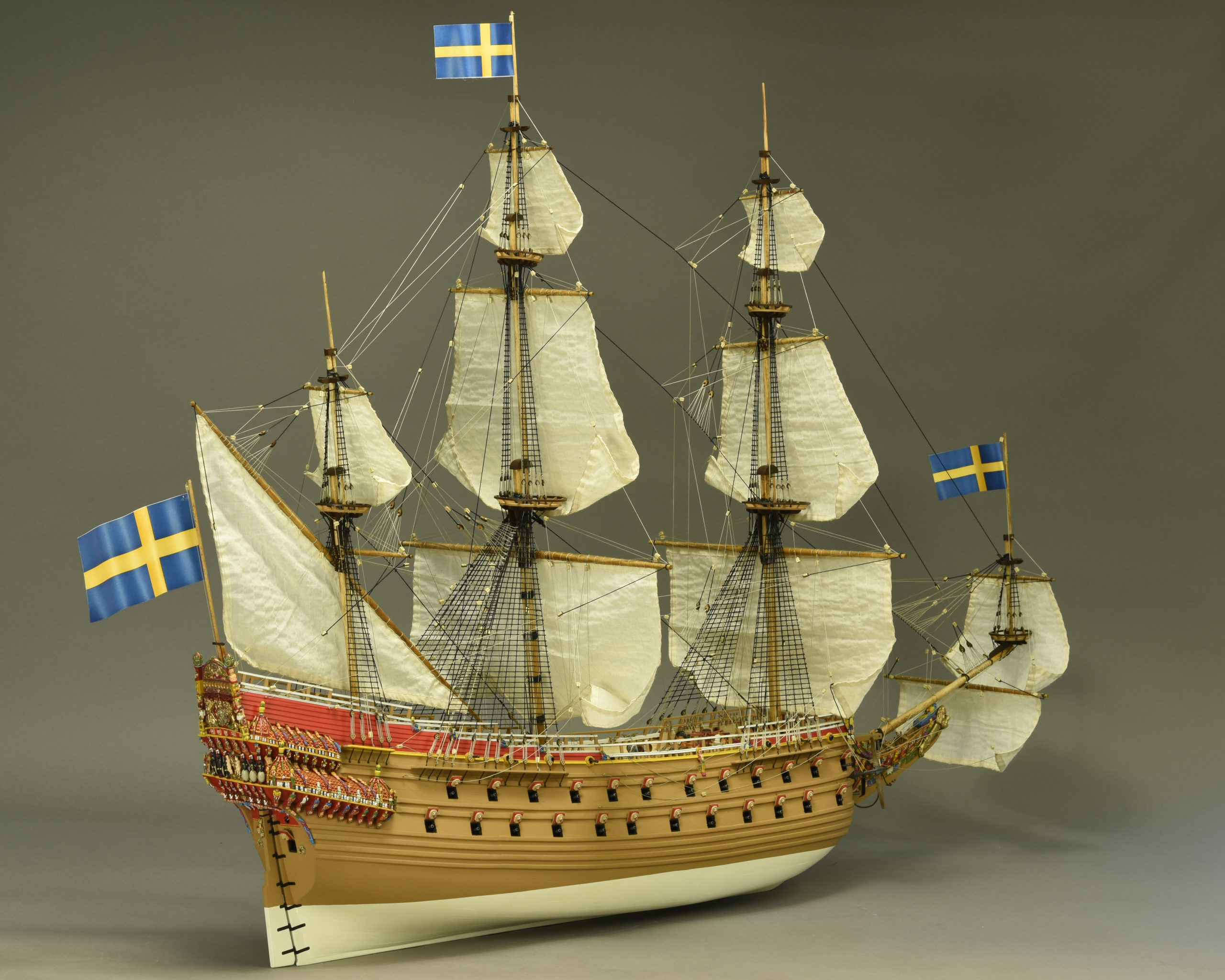 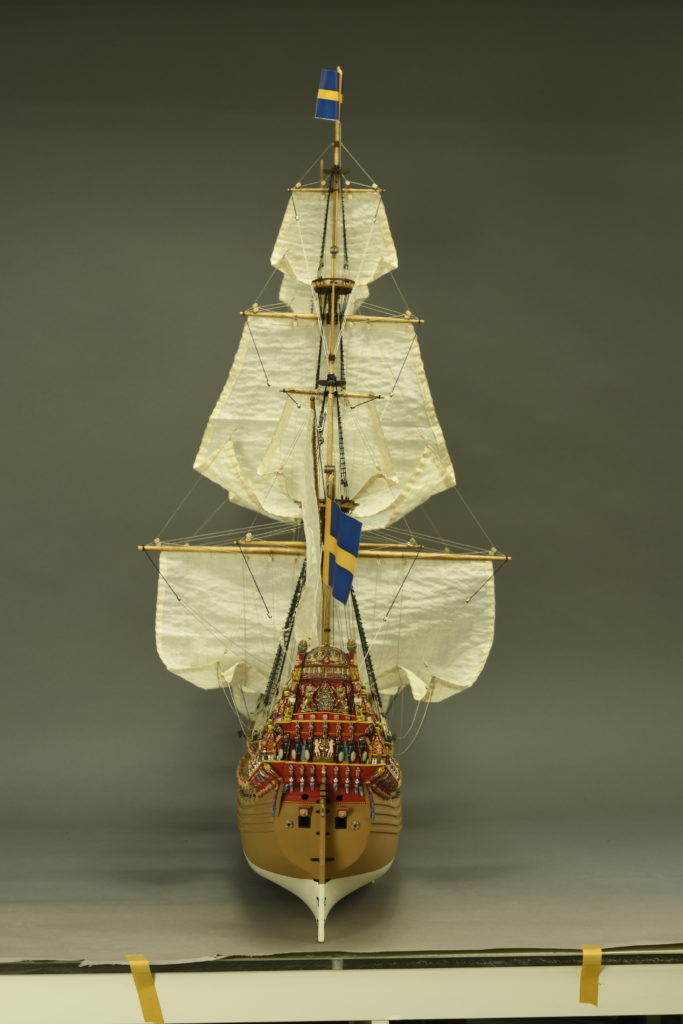 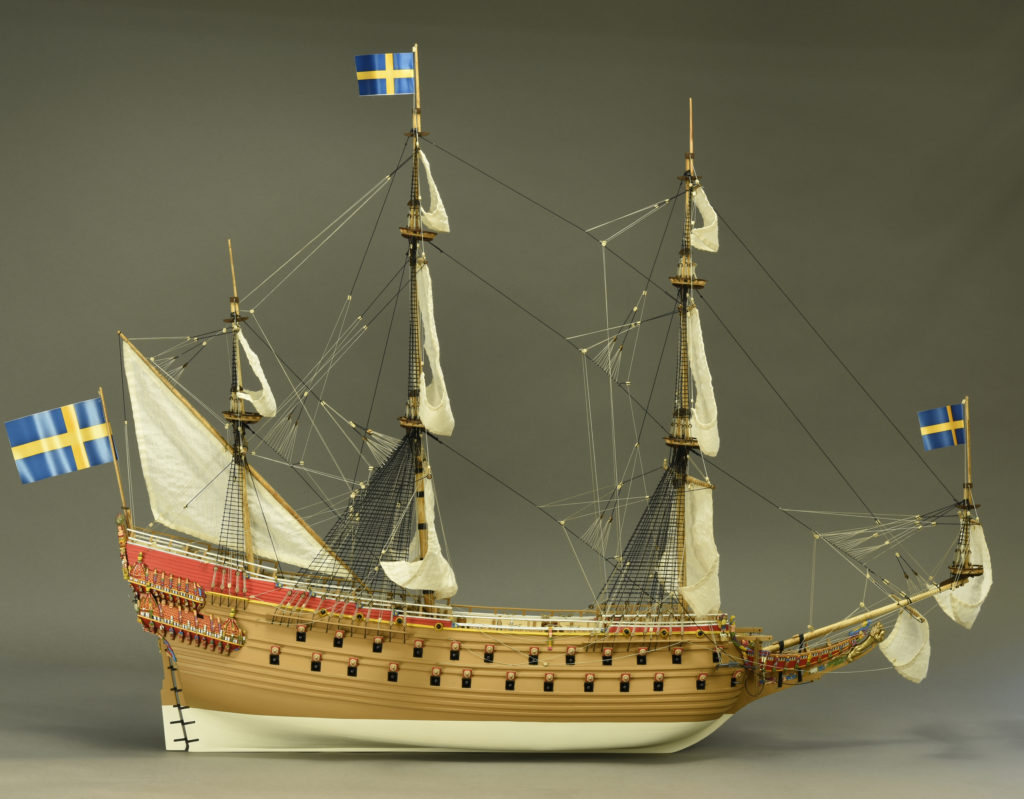 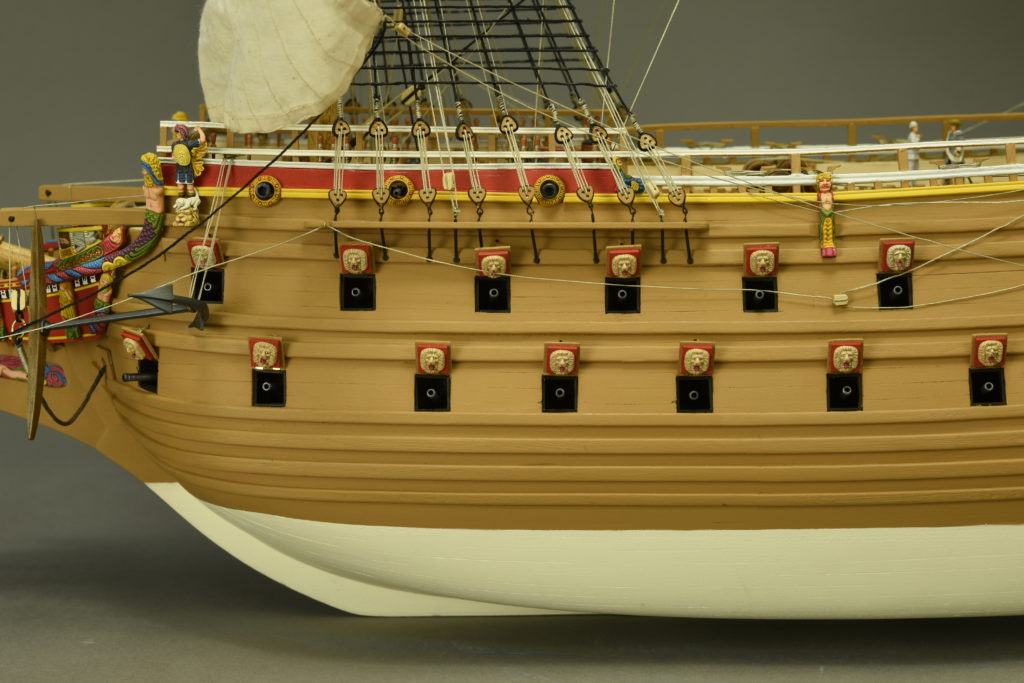 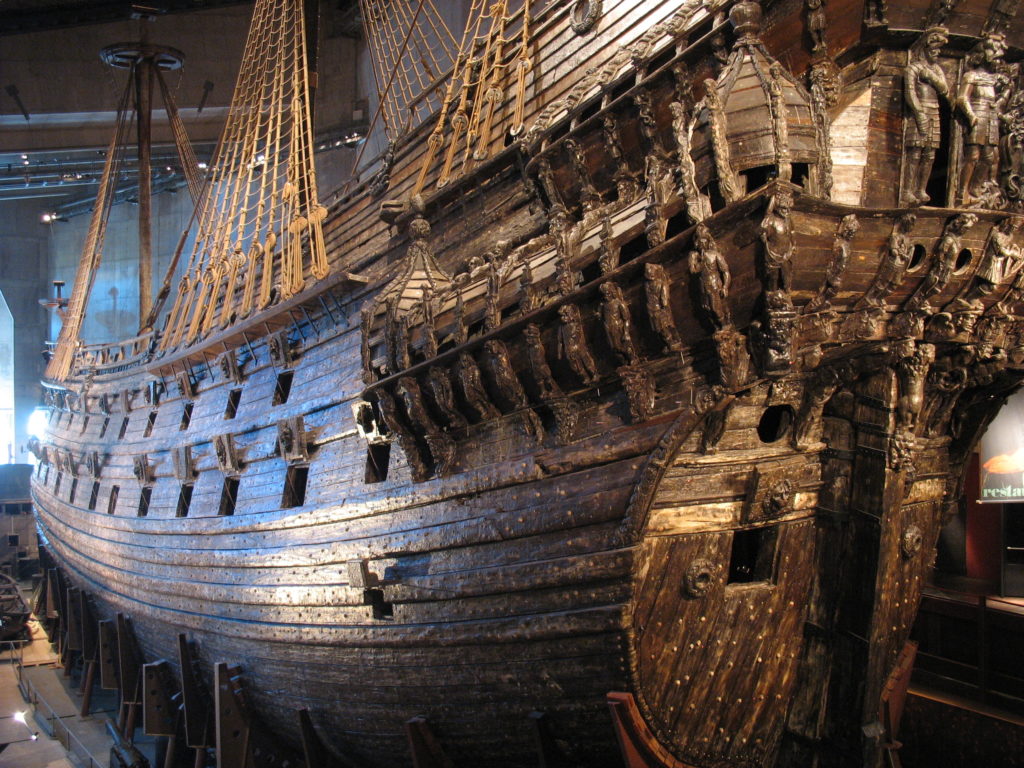 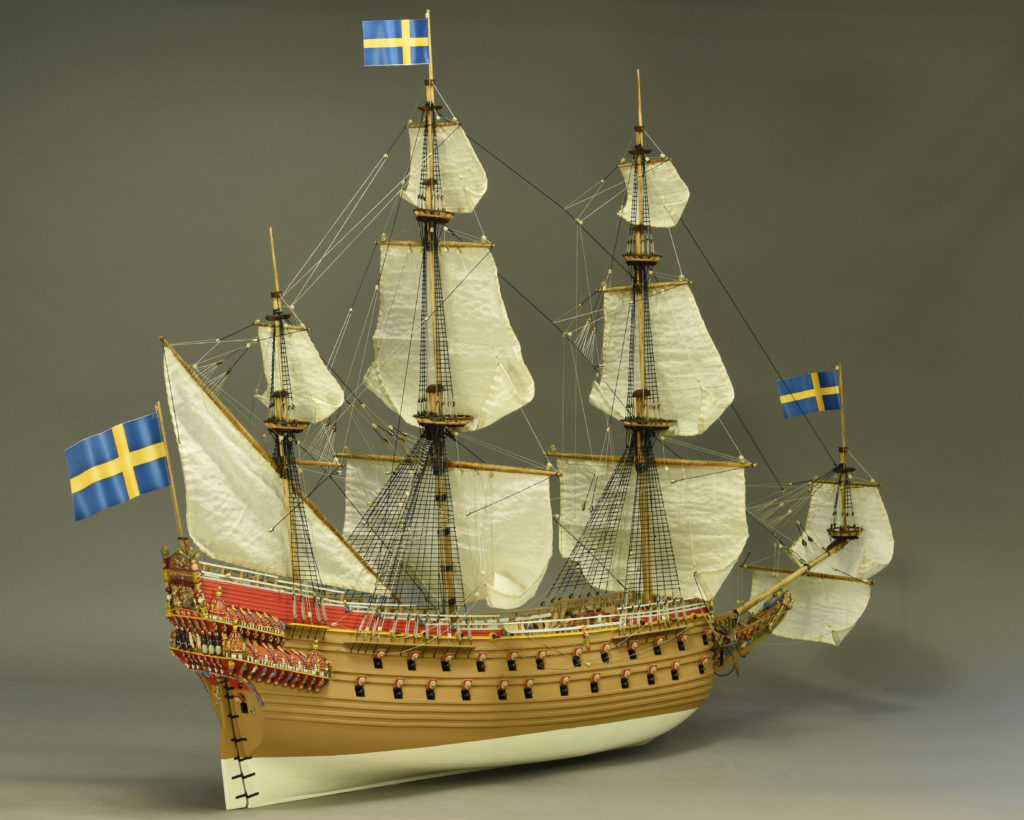 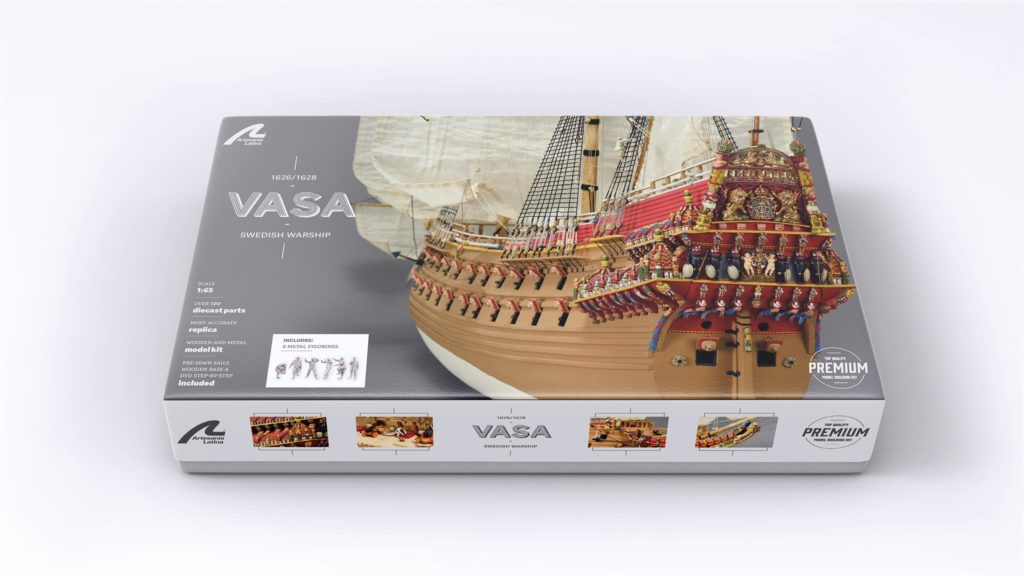 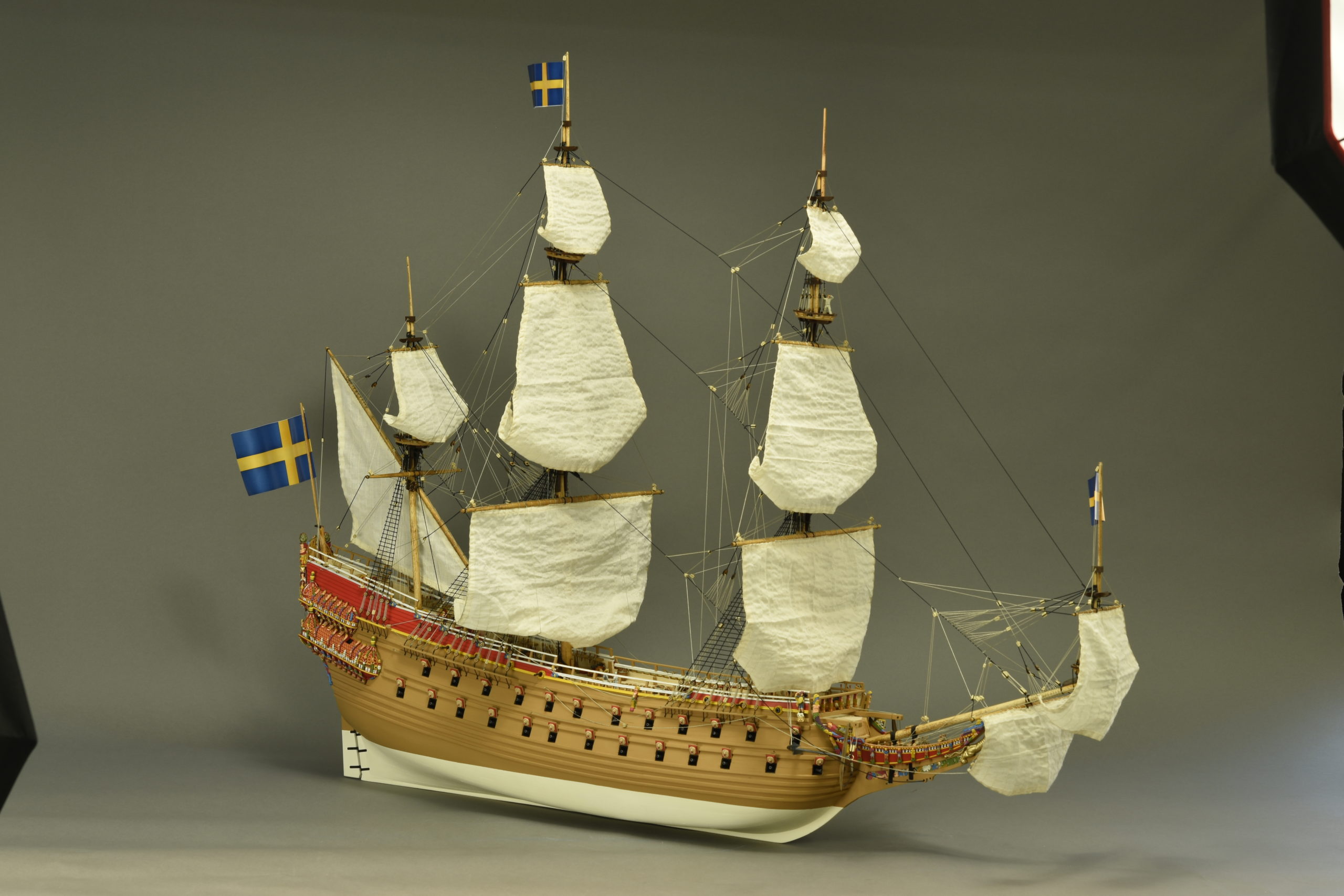 After an arduous work of ship modeling for a year and a half, Artesania Latina is pleased to present you its brand new and magnificent Swedish wooden ship model. The Vasa warship model at 1/65 scale, aimed at the most expert modelers who want new challenges. A marvel in terms of detail and difficulty! 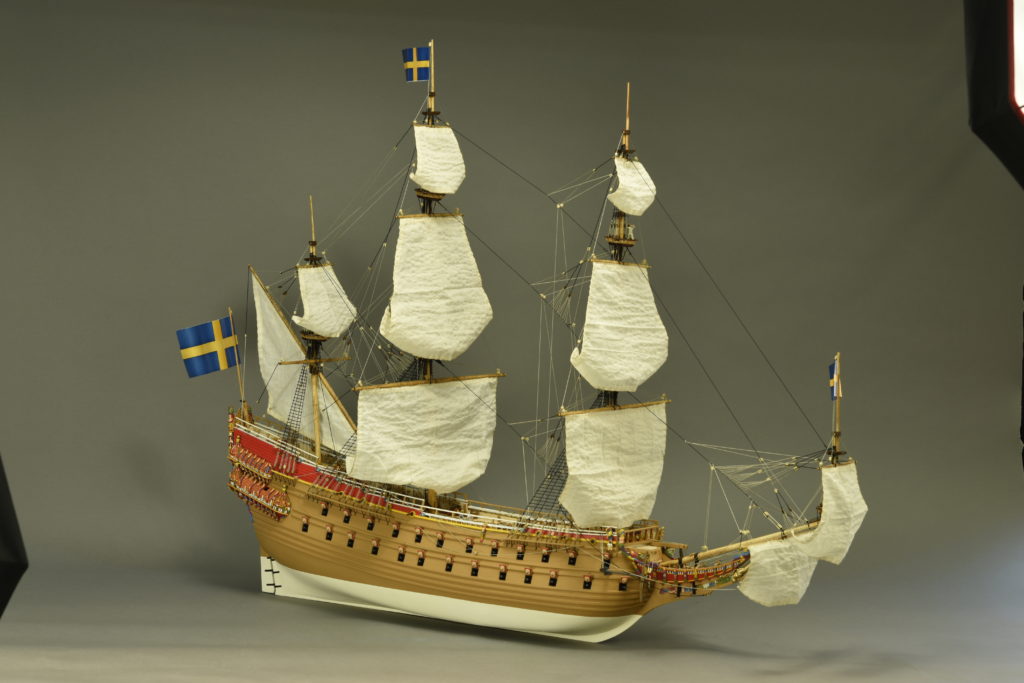 Scandinavian warship model Vasa is a great test to check modelers skills. Our partners have spent eight hours a day for twelve months for its assembly. The modeling kit requires patience and meticulousness in detail. 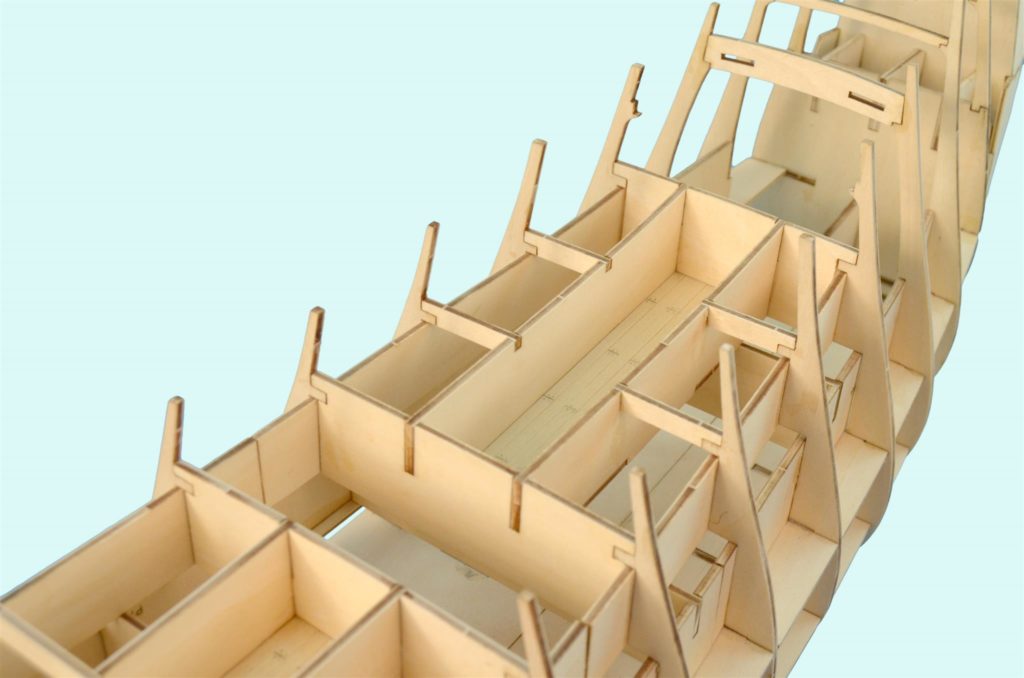 It is a perfect replica of the original ship, which is now in the museum called Vasa in Stockholm (Sweden). Thanks to the Vasa wooden ship model 1/65 the modeler will have entertainment for a long time. You will always be helped by very clarifying step-by-step photographic instructions written in nine languages. Do you want a great challenge? This is yours. 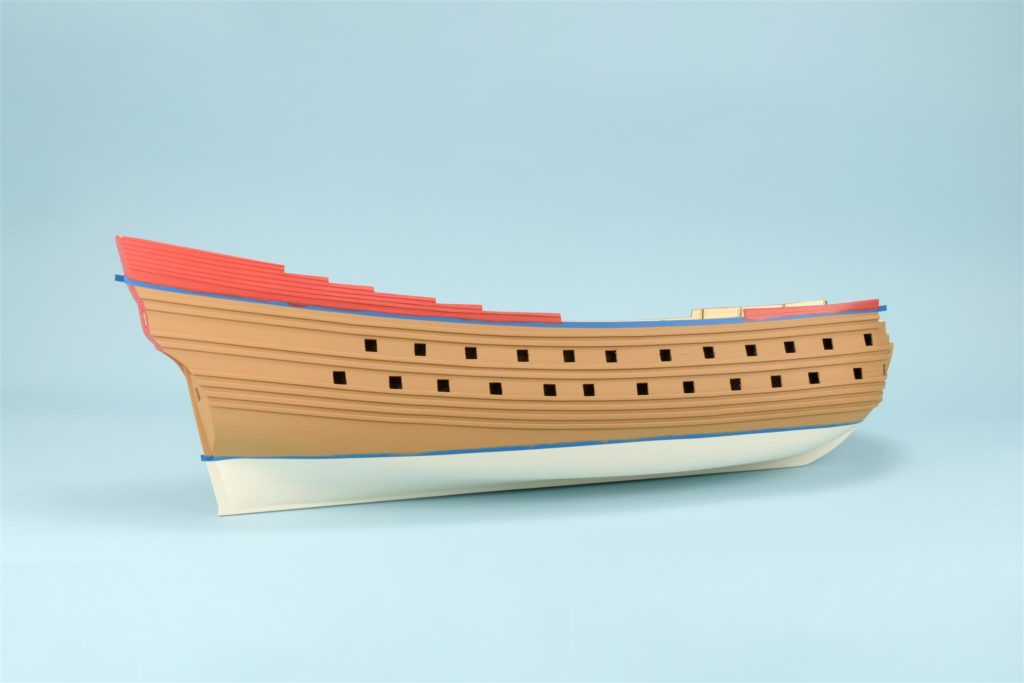 Among the most notable features of the Vasa, of this great Swedish sailboat, was its enormous power. It had to move 1,200 tons of weight and a sail area of ​​1,150 square meters and 80 tons. A fact that is reflected in our scale model due to its large dimensions: 42’’ length, 34’’ height and 40’’ width. 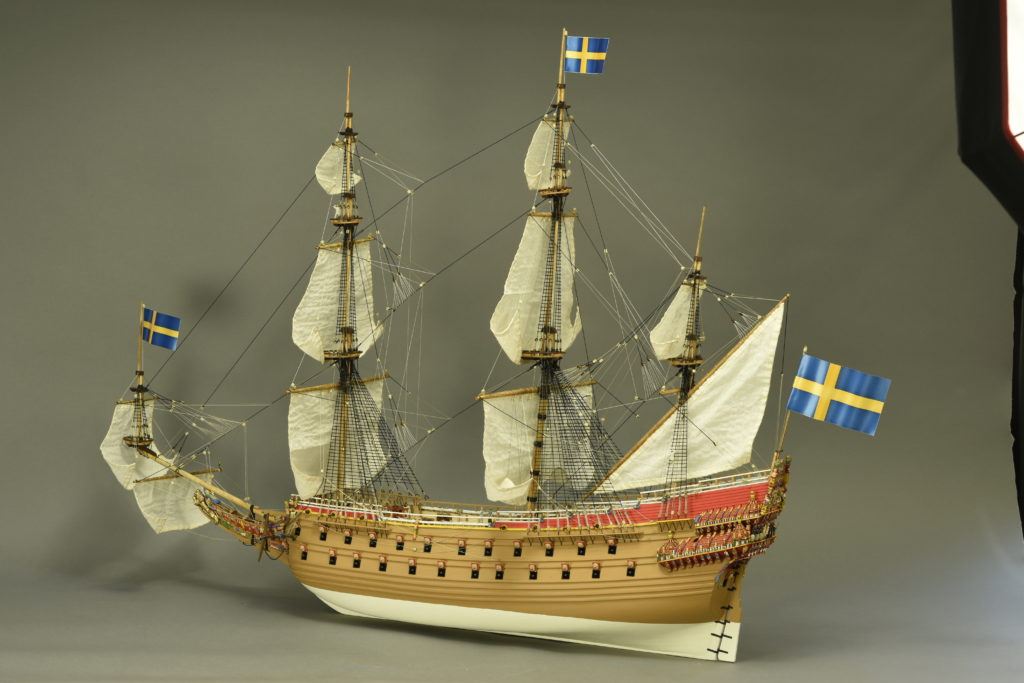 What about its decoration! More than a meter of beauty with around 100 sculptures made in die-cast between its stern and, somewhat less, its prow, which provide a colorful rarely seen on ship modeling. 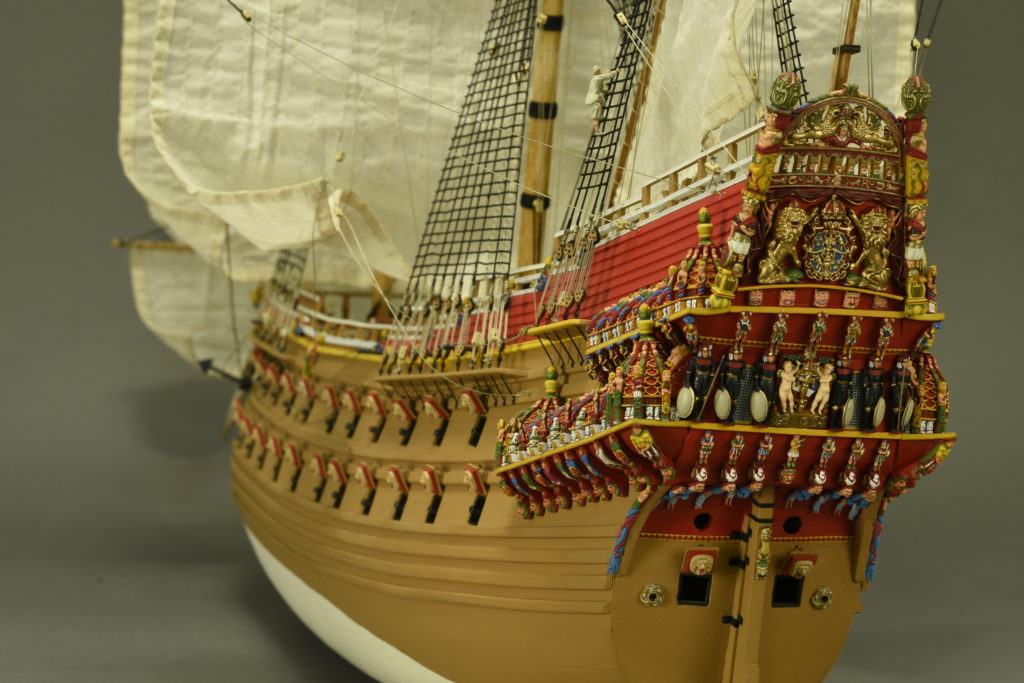 Also, full of meaning, the carvings are divided into five themes. They representing King Gustavo II and his lackeys, lions holding the shield, human faces with different emotions on their faces, angels, sirens and sea creatures and mythological. Moreover, when it was built, it had 700 more than today. It had heroes of the Bible, Roman emperors and Greek gods. 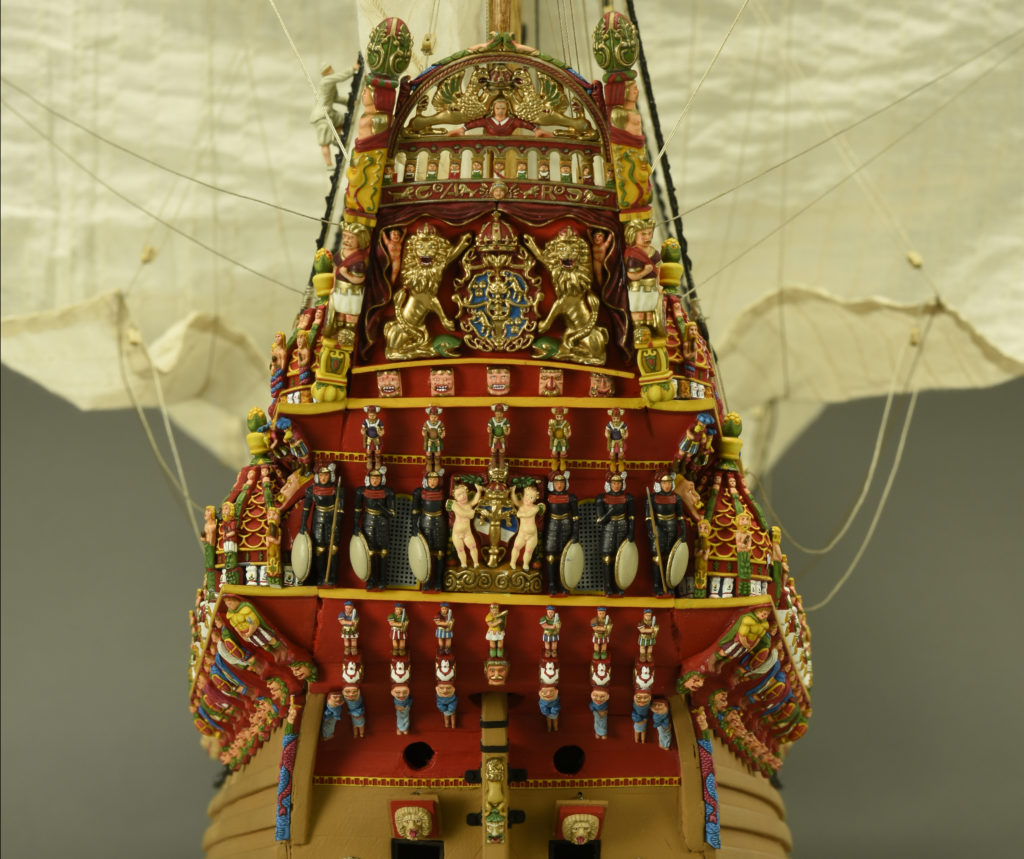 Vasa model ship may preside over any room in which it is placed, providing it with a touch of classical elegance. 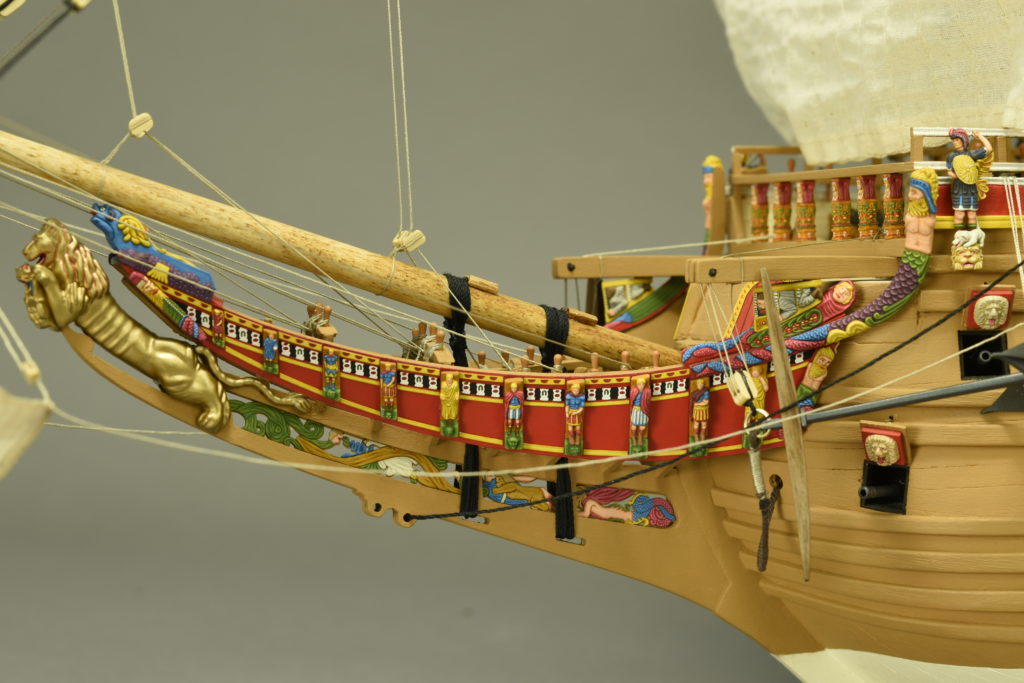 But it is not the only thing that the ship modeling kit of the Swedish vessel brings in die-cast, the 64 cannons of port and starboard are also made of this metallic material. 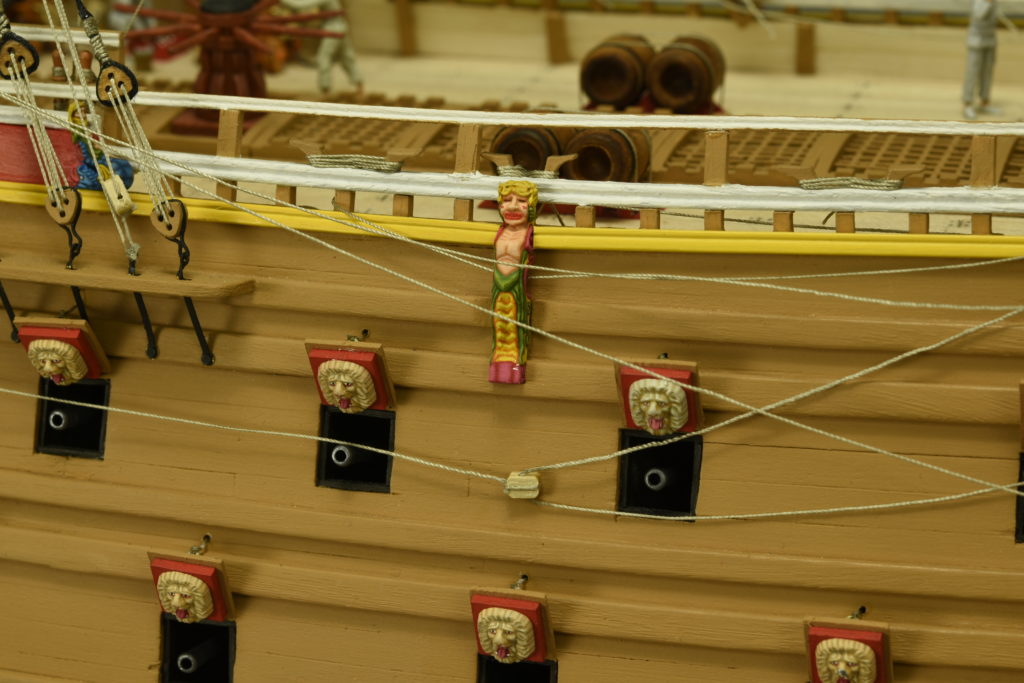 PHOTO-ETCHED PLATE, BASE AND FIGURES FOR THIS LUXURIOUS MODEL

If it seems the Vasa warship model has not enough decoration, our kit will surprise you because it brings a complete photo-etched that includes details for the bow, stairs to the deck, doors and embrasures, and hinges for both the rudder as for the frames of the embrasures. 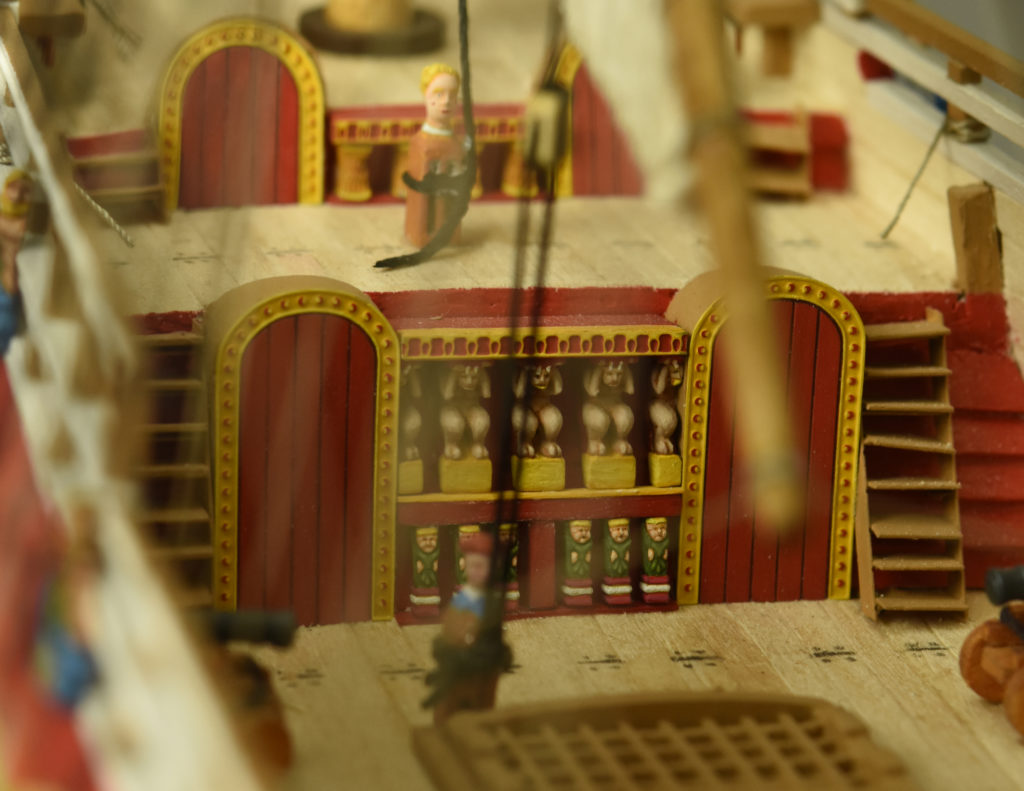 Of course, we have to highlight the Premium quality of all the woods with which you can build the Vasa 1628 scale model 1/65 and the hand-sewn sails ready to be placed. 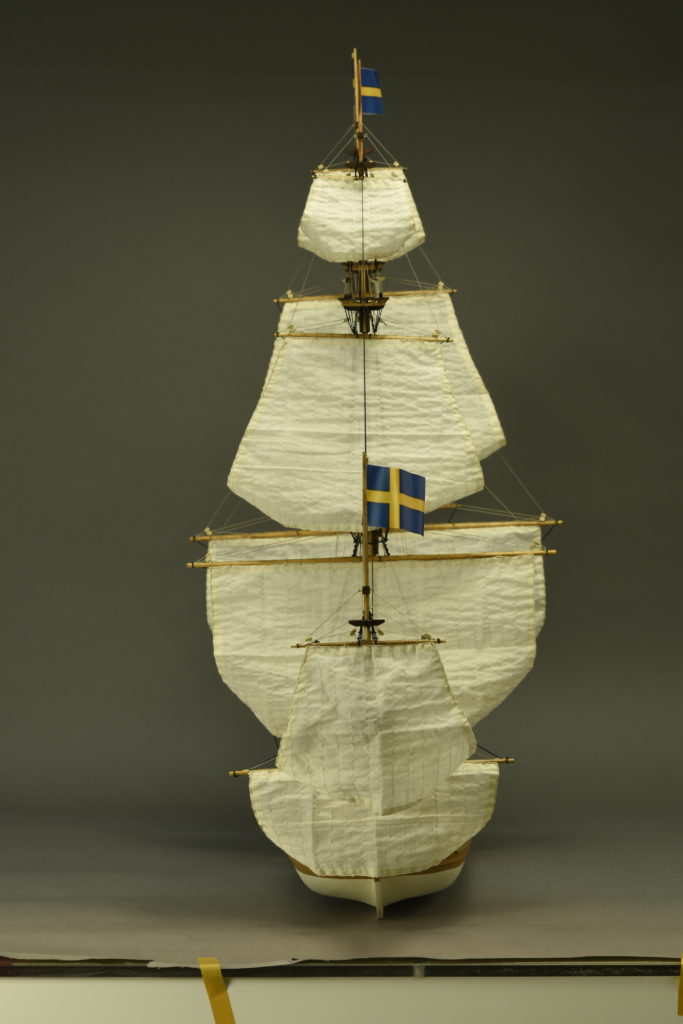 Finally, This fabulous modeling kit of the Swedish warship called Vasa brings two gifts that are not usually included in all scale models. On the one hand, a wooden base with a nominal metal plate to expose the ship model. On the other, six metal figures that will give more realism to this naval model. 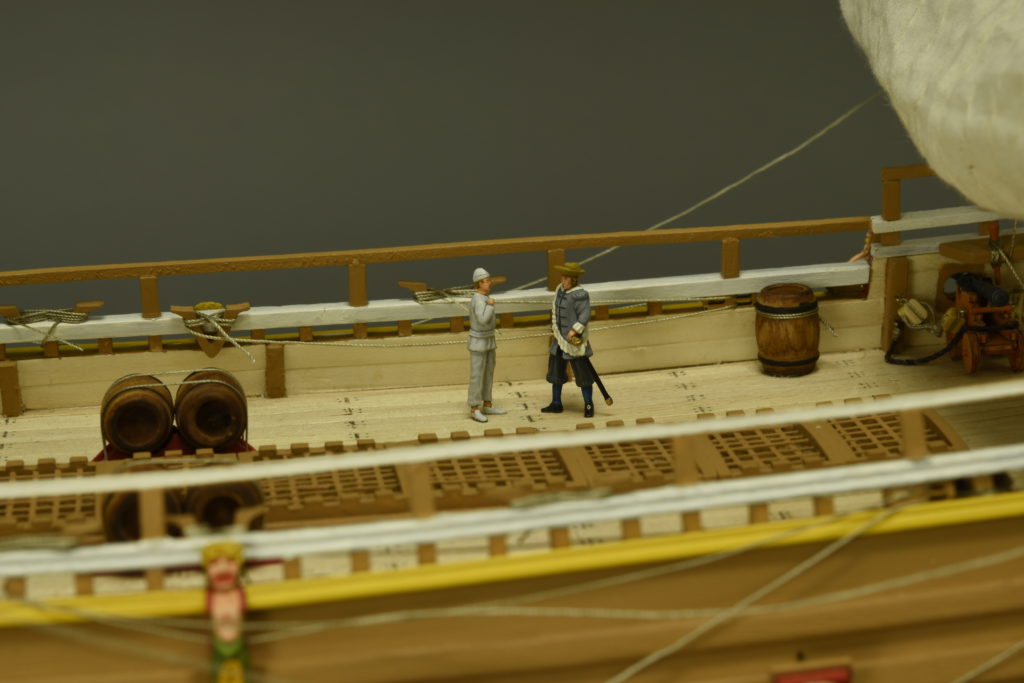 Here below you can watch two videos showing the scale model and the contents of the modeling kit: