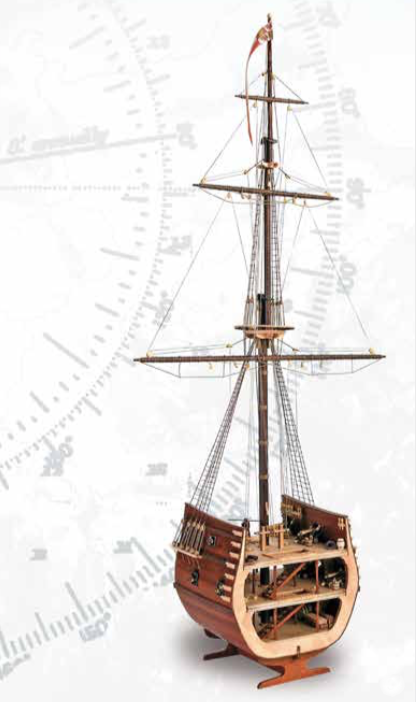 Galleons appeared in the middle of the 16th century thanks to the Spanish Armada. For 150 years, they were the warships and transport par excellence. Its three deck levels, the richness of its equipment and its imposing and robust appearance make the Section of San Francisco II at scale 1/50 a wooden galleon model kit truly splendid. Discover all the secrets of the galleons! 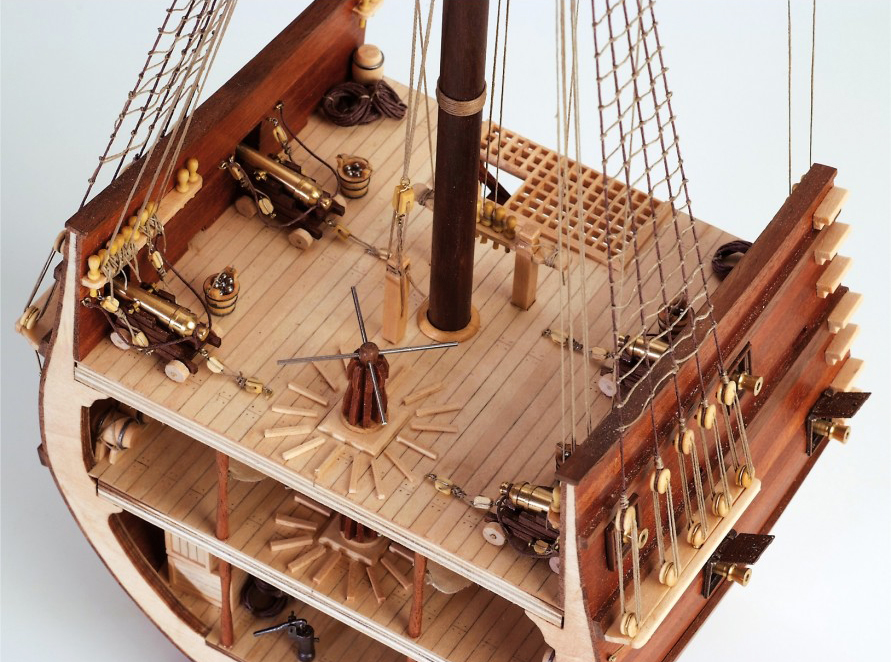 The galleon model with the Section of San Francisco II from the 16th century is a fantastic naval modeling kit in wood aimed at beginners modelers. Building this scale model, the modeler can examine in depth the construction and structure of this Spanish ship. Best of all, you can see in detail all the elements that make up its three decks. This fact allows the fan of this hobby to get an idea of ​​what life was like on board.

The central section of this galleon model shows the interior of the ship and wonderful details. Cannons and their metal bullets, gun carriages, buckets, casks/barrels, sacks, winches and bilge pumps, among many other objects of the time. 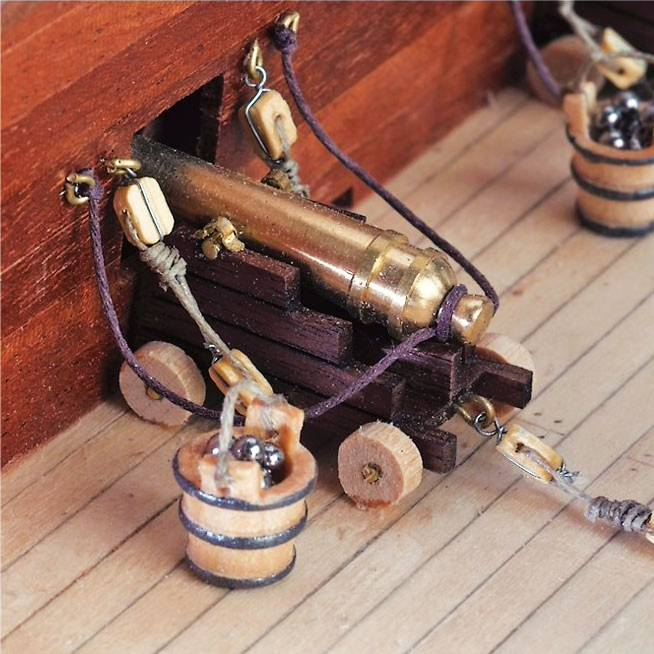 The faithful miniature replica of the Section of the Galleon San Francisco II has two bridge , since the lower deck lacks cannons. Latter was intended for loading and transporting food, gunpowder and other belongings. Once built, the scale model measures 4.72” (120mm) length, 26.14” (664mm) height and 12.28” (312mm) width.

The wooden naval modeling kit with the San Francisco II galleon section model includes high quality parts for precise and friendly assembly. Among many other elements, it contains high precision laser cut board, noble woods, brass and die-cast parts and fabric, such as the adhesive fabric with the flag. Likewise, as a gift for our modeling friends, it includes a small exhibition base with a metal plate for display. In this way, the galleon model will shine in all its splendor at any of the rooms of your home, workshop or office. 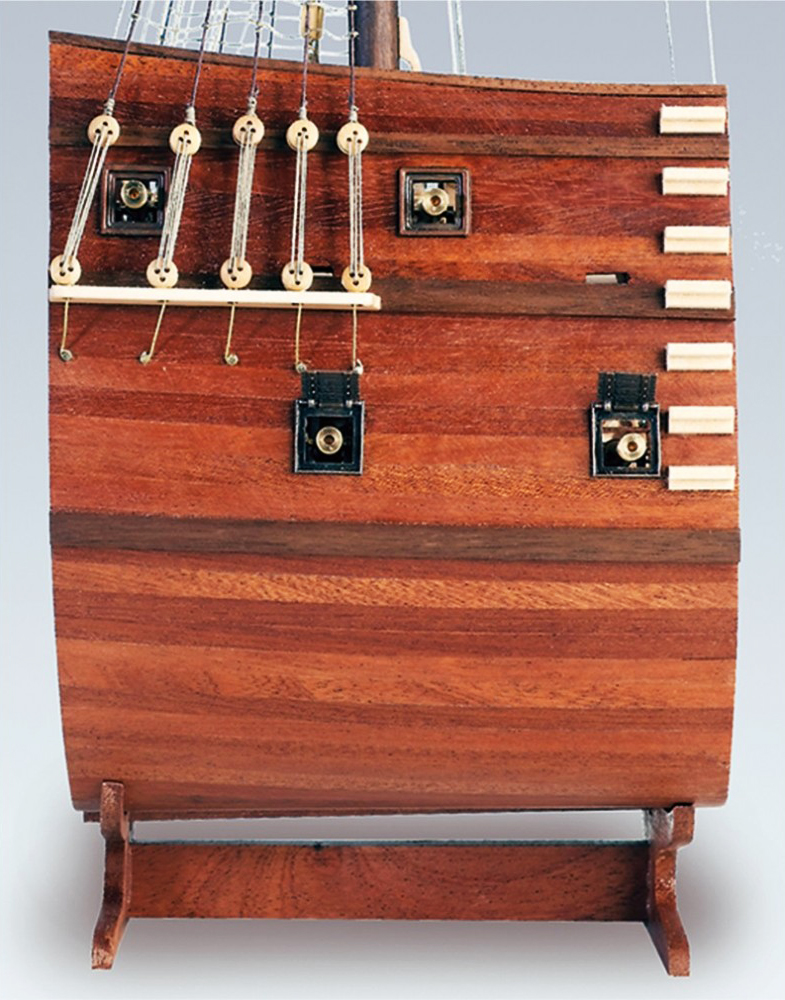 For the assembly you can follow our complete full color step-by-step guide on DVD format for your computer. All stages of the assembly are perfectly reflected in these instructions by means of legends and visual explanations. The galleon model kit does not come with printed instructions because Artesania Latina is committed to the environmental preservation of our planet. 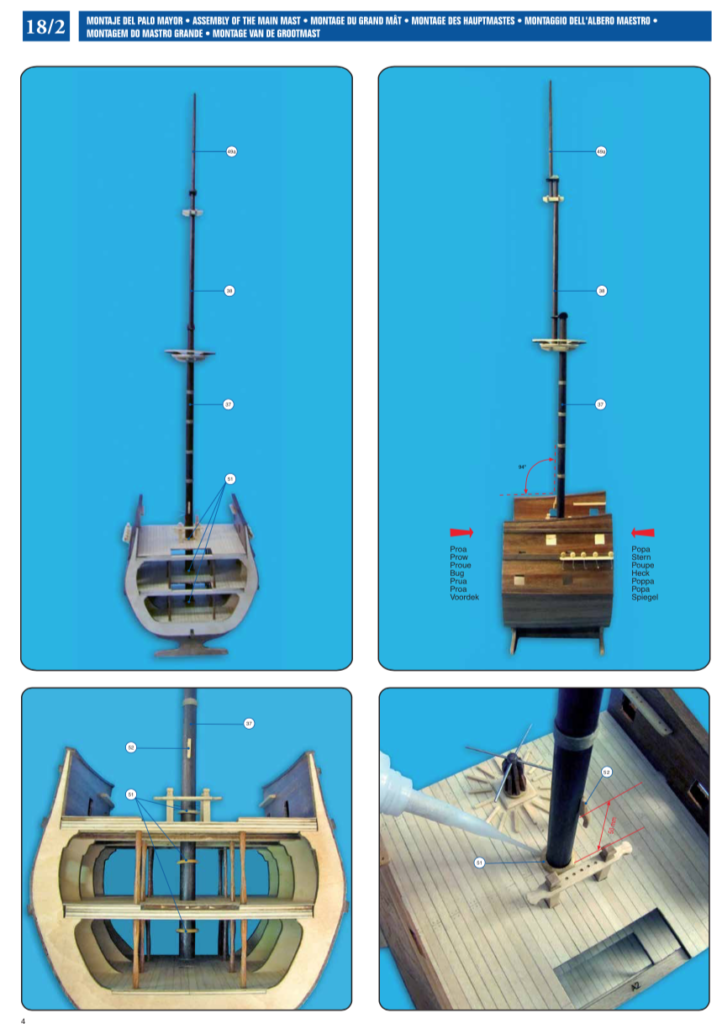 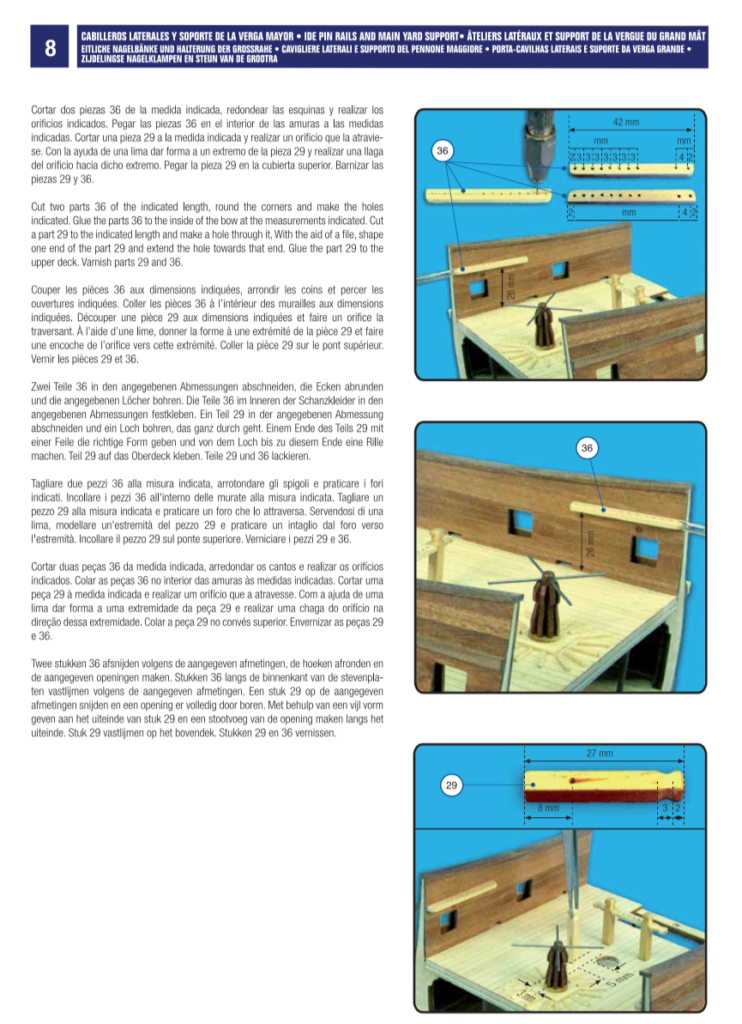 Also, its parts list is especially clear and pleasant. Instead of bringing only names of parts and their quantities, each element comes with the image that represents it. In this way, the task of recognizing the parts is made easier for the modeler who builds the model. 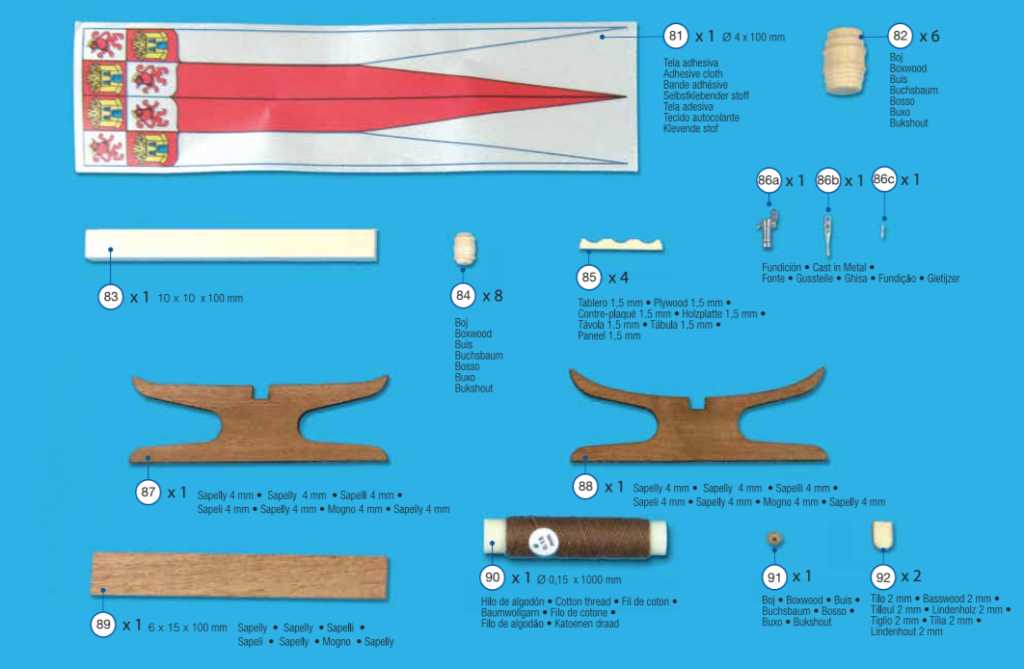 You can consult the contents of the naval modeling kit with the galleon model of San Francisco II Section thanks to the video below presenting the scale model made by Artesania Latina. Please note that only digital instructions are available now, it does not contain paper instructions.

The galleon model Section San Francisco II at 1/50 scale is one of the best rated by all modelers regardless of their origin. Dare to assemble the scale model of one of the naval historical gems! 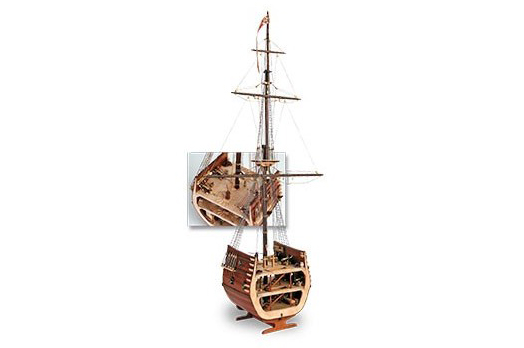 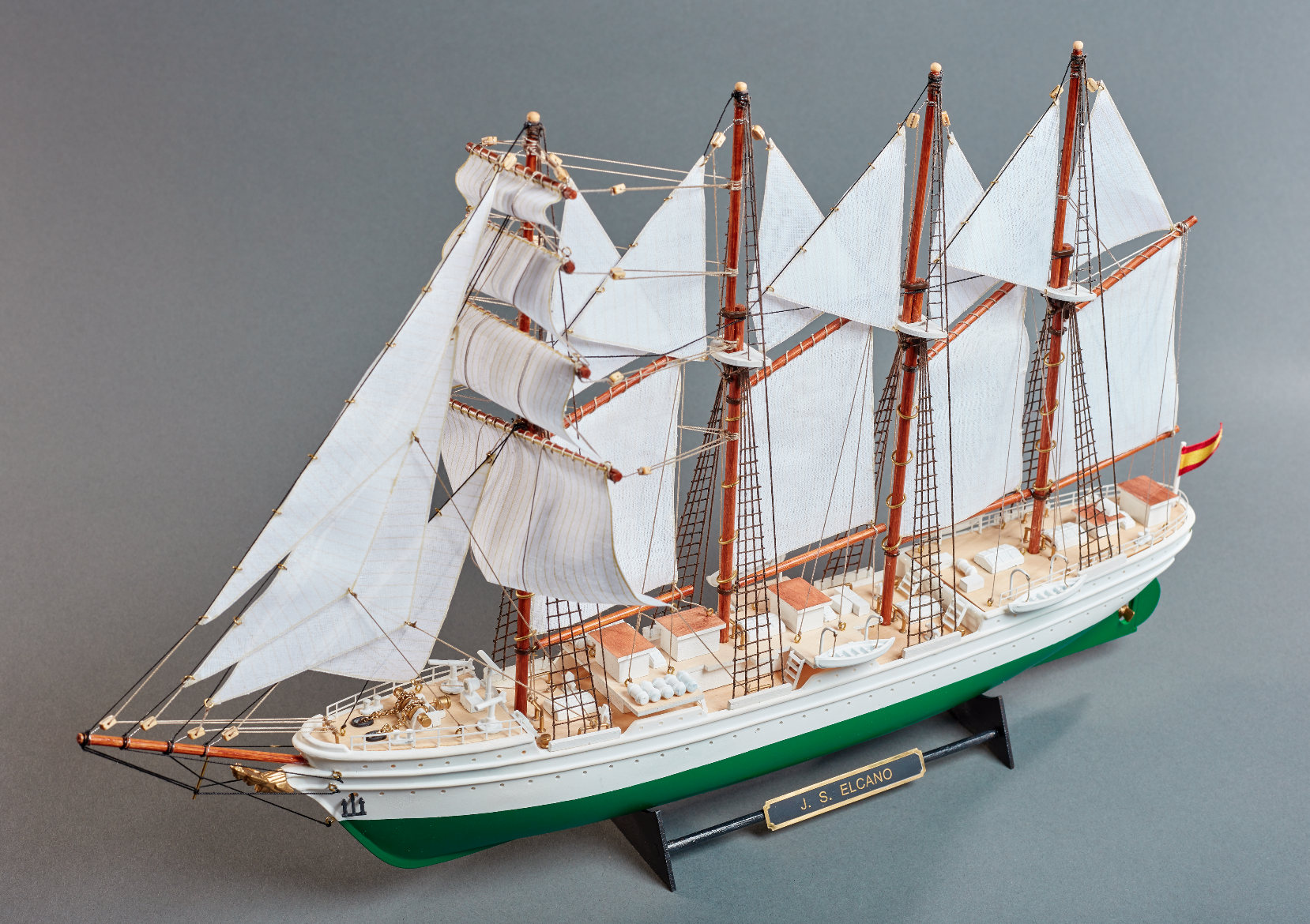 We have redesigned and manufactured it again to delight lovers of naval modeling, especially for those who want to start in this wonderful hobby. Why? Because the renewed wooden and high quality ABS plastic ship model of the Spanish school vessel called Juan Sebastian Elcano is, in this way, the easiest to assemble of the entire market, so it is the perfect scale model for any beginner modeler to start over 14 years old. The new Elcano will provide you with a new mounting experience. Also the possibility of building either the aforementioned model or its Chilean brother Esmeralda. They are two of the novelties of the modeling kit! 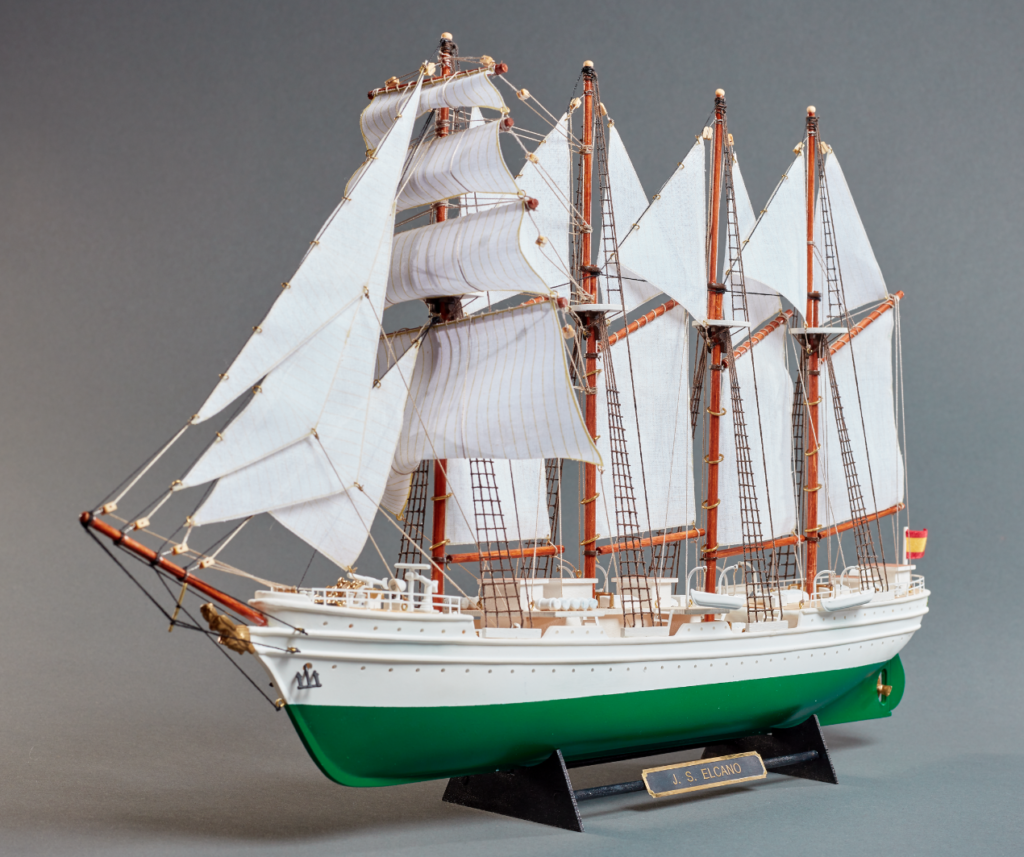 It is a replica of the famous brigantine-schooner, whose name comes from the Spanish explorer who as captain gave the first round the world in 1552, having to replace Fernando de Magallanes. The ship modeling kit of the new Juan Sebastian Elcano model, designed by Artesania Latina, contains high-quality birch wood cut with laser and an one-part helmet made of ABS plastic for a less arduous assembly. Also, pre-cut sails to be cut and placed, cotton threads and many details in metal and photo-etched. We cannot forget a magnificent gift: a wooden base so that the scale model is perfectly exposed. With the name plates and the national flags of both Elcano and Esmeralda! 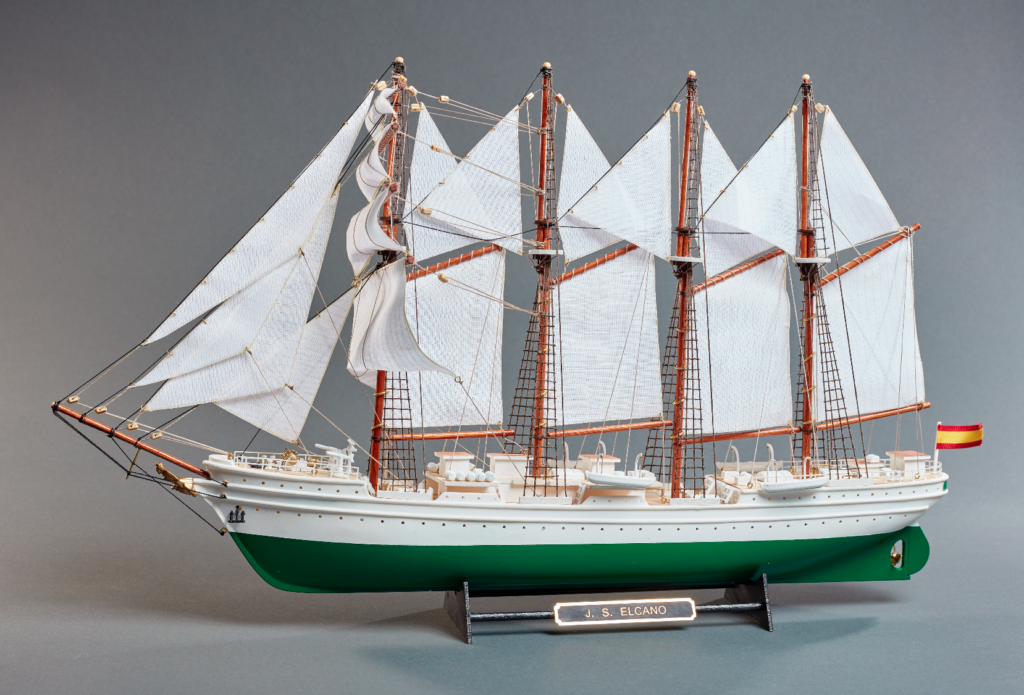 Discover all the contents of the wooden naval modeling kit of the Elcano and Esmeralda school ship by watching the video below. Take a look with us!

To achieve this assembly goal, the modeling kit of the Spanish school ship also has new video instructions. The naval modeler can look at a simple step-by-step building process. With a large number of details so that the assembly of each thread, each block and each rigging is clearly explained without difficult texts full of technical words. 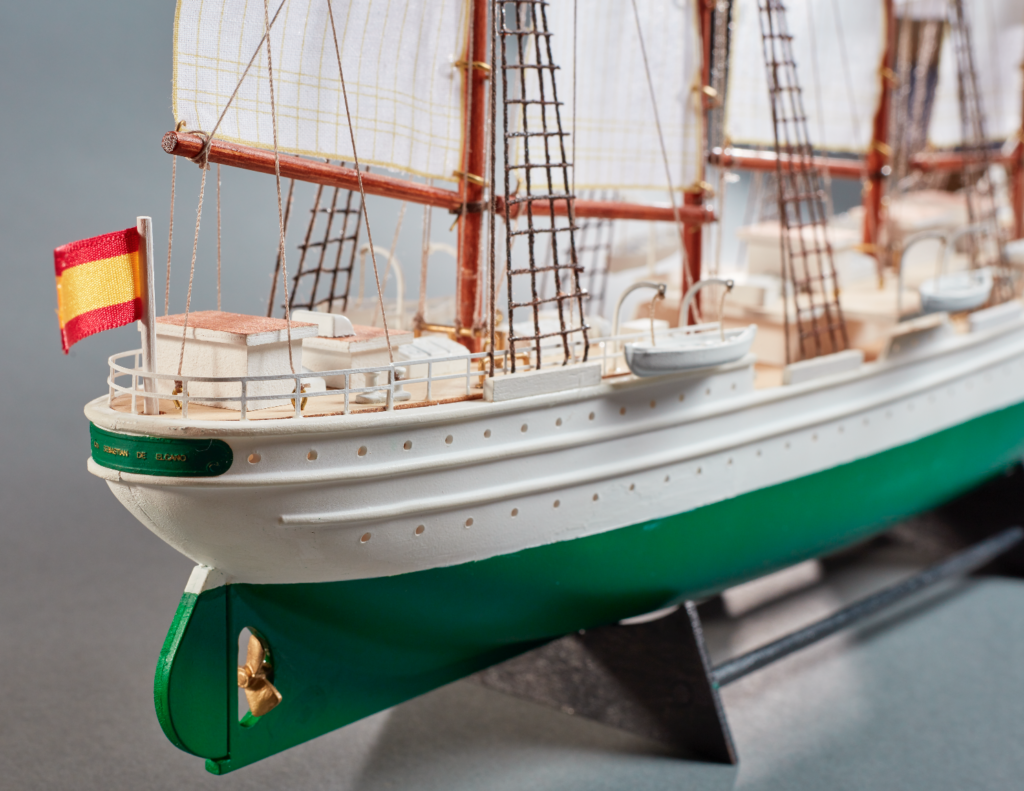 Our Artesania Latina’s modeler says that “this scale model is built quickly, if you work eight hours a day it will be finished in two or three weeks, if you pay less attention, in just over a month”. This manifestation makes clear that it is an ideal miniature for those who want to start in naval modeling. 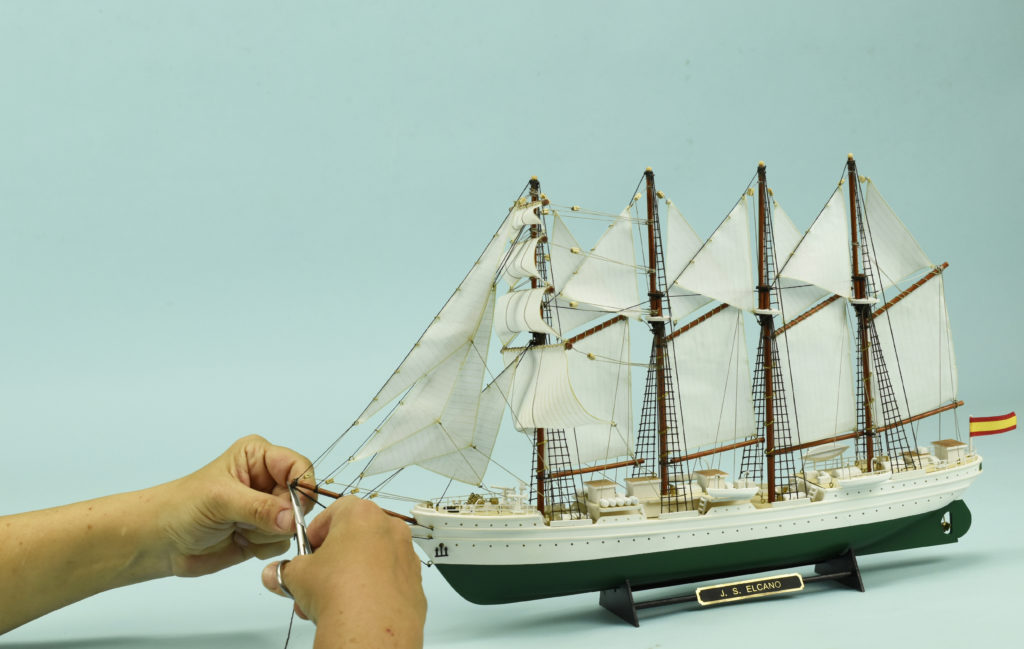 The ship modeler in charge of Juan Sebastian Elcano model project states that “it is very simple to build because the monohull is already assembled, and even brings all the bull eyes already made” to which Rodriguez adds that “the only thing that you must do is to paint in white the whole helmet, and then draw the waterline in order to paint in green the lower part of the helmet, being of course important the placement of the propeller and the anchor, then paint them too “. 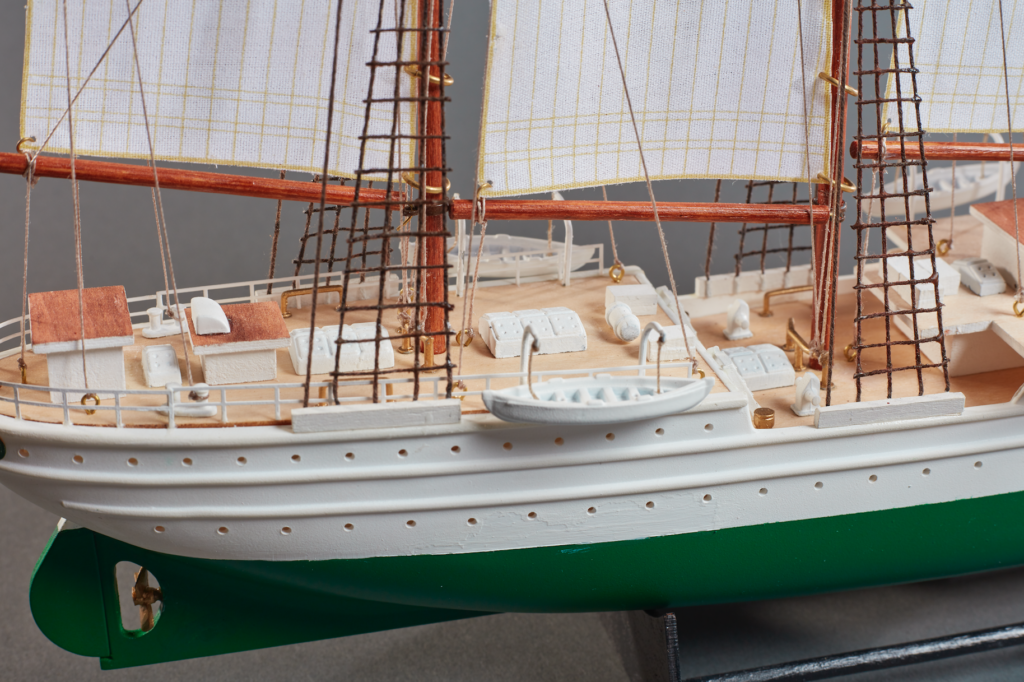 Artesania Latina’s friends will enjoy a lot when they have Juan Sebastian Elcano’s and Esmeralda naval modeling kit on their hands, but according to our modeler, they will have fun on the rigging building process: “It is very entertaining to assemble because you have to create a beautiful swarm of threads with object to keep the sails and the five masts upright and balanced in their exact positions, besides that previously the poles must be measured, cut, dyed and varnished, however, the modeler do not suffer during their placement thanks to a very well explained instructions”, the professional of this hobby says. 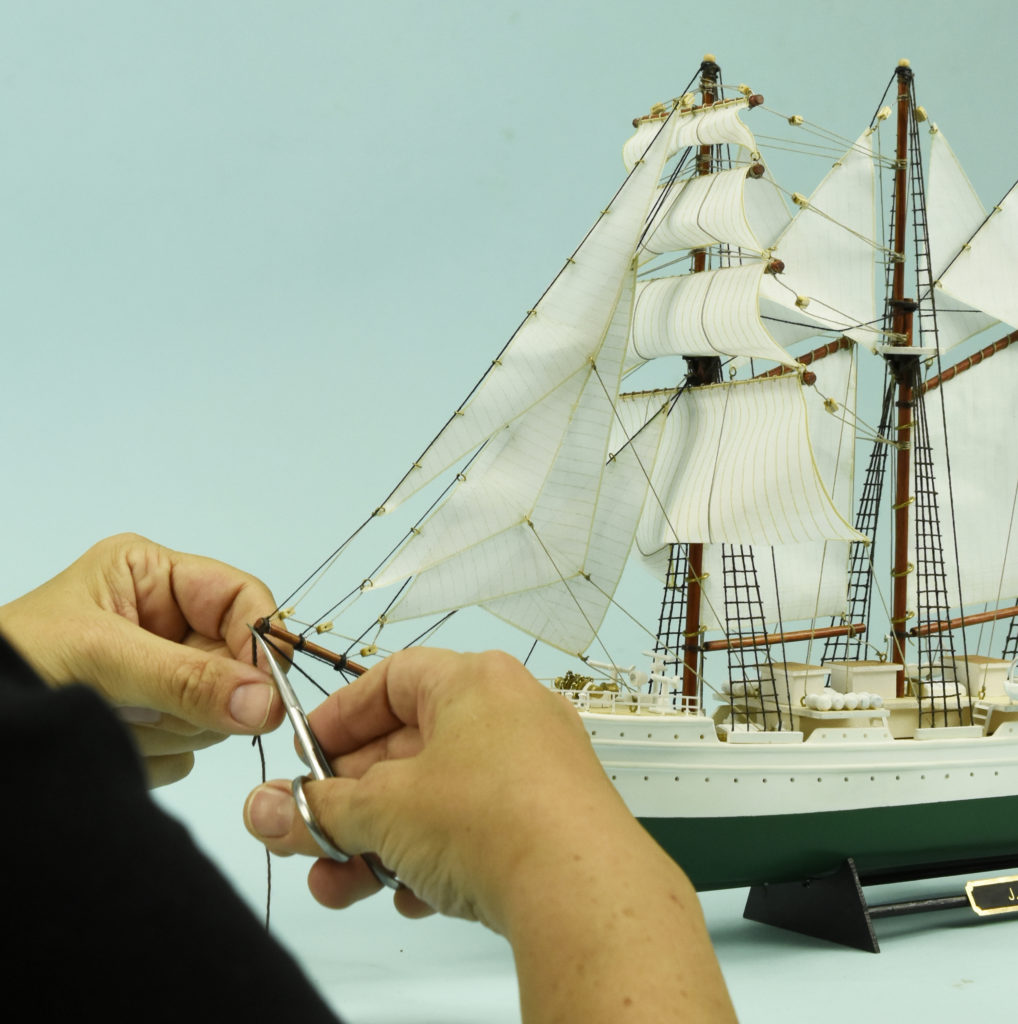 Speaking about the school ship rigging majesty, you can see on the image below the large number of sails in its five masts and its beautiful arrangement, for which “it has been necessary a multitude of threads, and a required, conscientious and very funny work of ‘surgery’, especially, with the transversal threads”, the modeler is showing us delighted. If you want extra help, you have specific Micro Tools for Rigging, for sale separately. 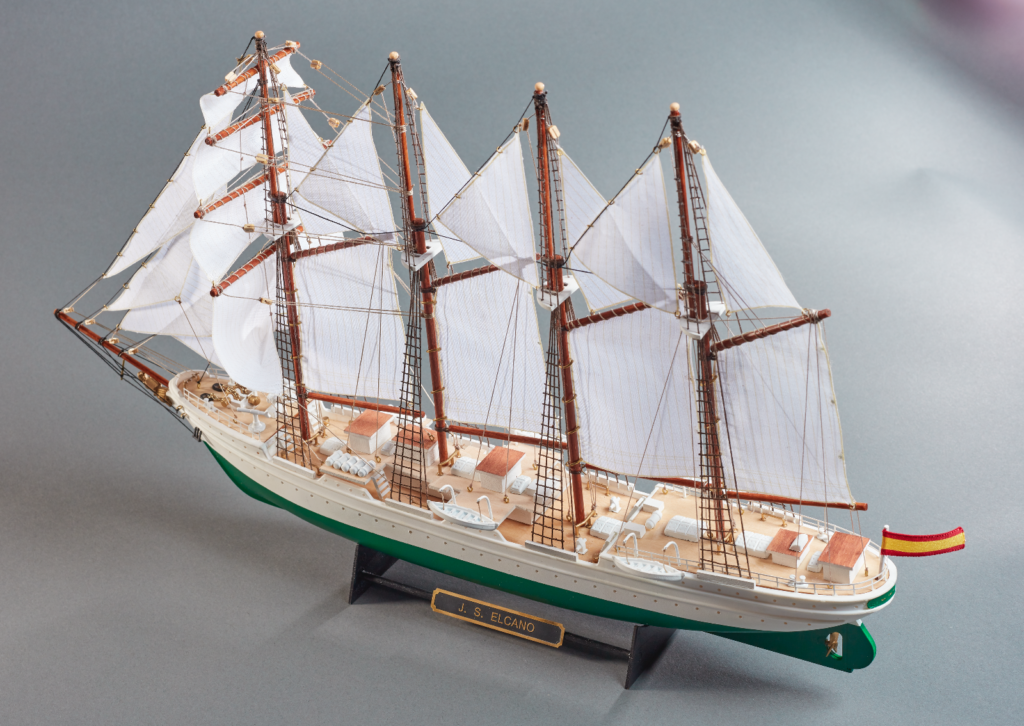 The modeler points out that “several of the decorative elements on the deck of the Juan Sebastian Elcano model have been improved, as is the case of the stairs, the handrails, the anchors, the folded rescue boats and, apart, the exhibition base plate”. 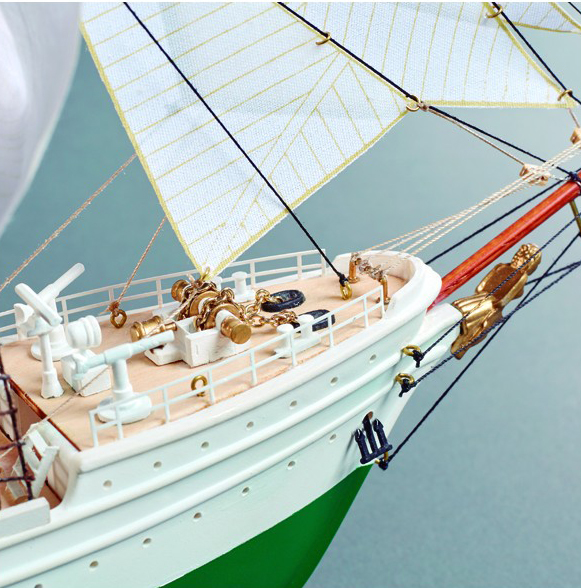 These details are “more realistic and can be manipulated – the modeler continues – because they are manufactured in photo-etched, except lifeboats, which are now turned wood, while in the previous Juan Sebastian Elcano scale model all these were manufactured in die-cast, so the appearance was much coarser and less trustworthy”, the professional says. Elcano and Esmeralda figureheads “are wonderful“, she exclaims. 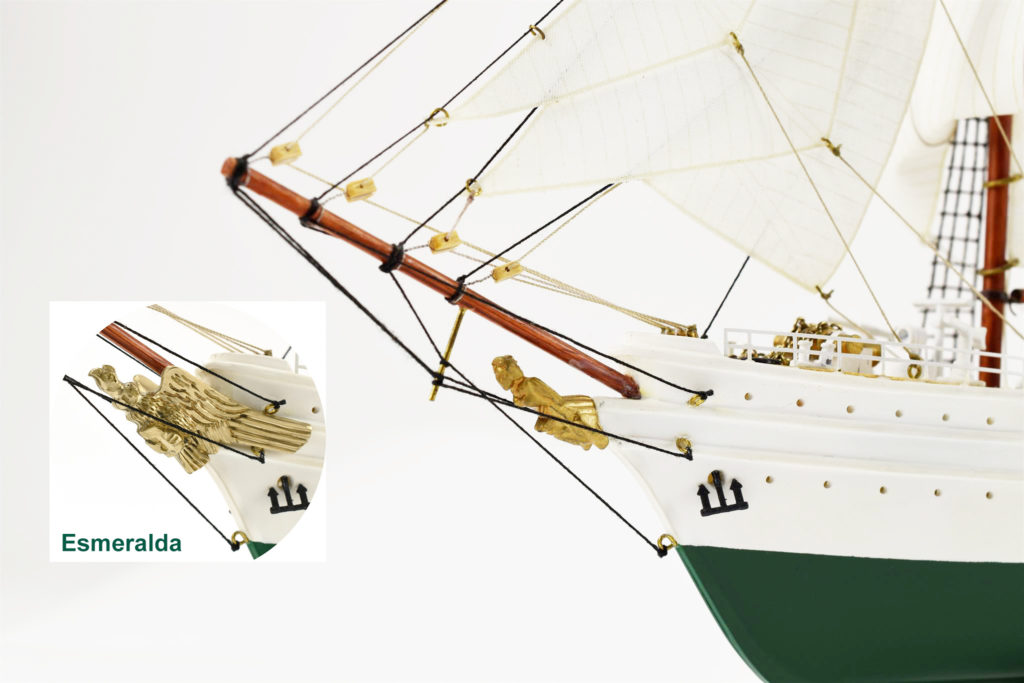 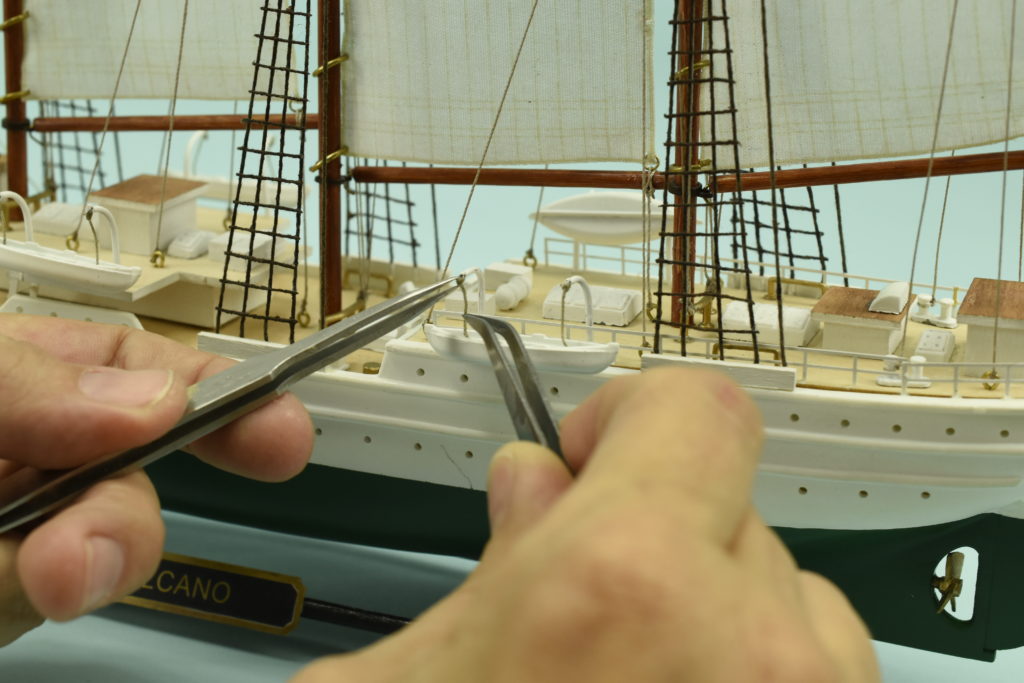 In March 5th, 1927, dictator Miguel Primo de Rivera’s daughter, Carmen Primo de Rivera, launched Juan Sebastian Elcano school ship in Cadiz. Although the first name the boat received was Minerva, which is the goddess that appears in the figurehead, by Royal Decree in 1925, was renamed with its current name, after the owner of the shipyards, Horacio Echevarria, urged to Primo de Rivera to tell the monarch Alfonso XIII that he wanted it. 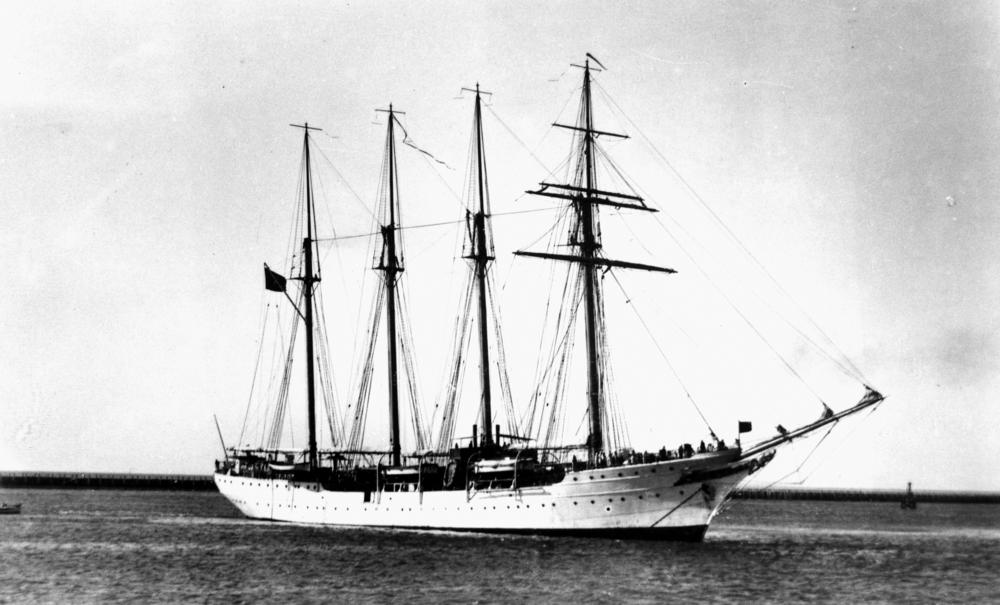 As a curiosity, its first trip was from Cadiz to Malaga with the king on board the ship. Then moved to Seville, through the Guadalquivir river, where an Ibero-American Exposition was held. It also passed through the Canary Islands and then went to Guipuzcoa, where it received the combat flag. In this trial period that lasted until 1928, always in Spanish waters, Juan Sebastian Elcano traveled 5,769 nautical miles in 57 trips, at an average speed of 4.2 knots. 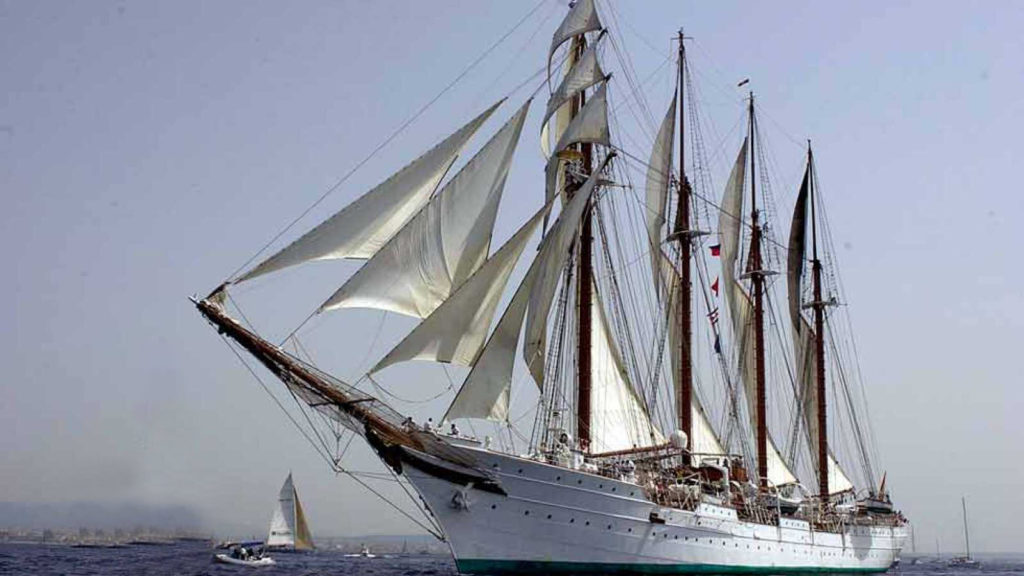 Just after, it undertook its first instruction cruise around the world in the opposite direction that Elcano did in the past, starting from Cadiz on August 1st 1928, where it returned on May 29th 1929. Two midshipmen have provided more packaging and history to this vessel: King Juan Carlos I, in 1958; and his son and current monarch of the Kingdom of Spain, Felipe VI, in 1987.

Juan Sebastian Elcano vessel (and its Chilean brother Esmeralda) has the following measures: 4,452’’ in length and 3,704’’ without the bowsprit; 515.7’’ of breadth; 341.7’’ of depth; and 275.6’’ of draught and 1,917’’ of air draught. In this sense, its structure is distributed in four essential areas that are the Quarter Deck, the Forecastle, the Waist and the Poop. The back main mast, whose name is Asturias, is located on the Quarter Deck, a place where all the most relevant events tend to take place. 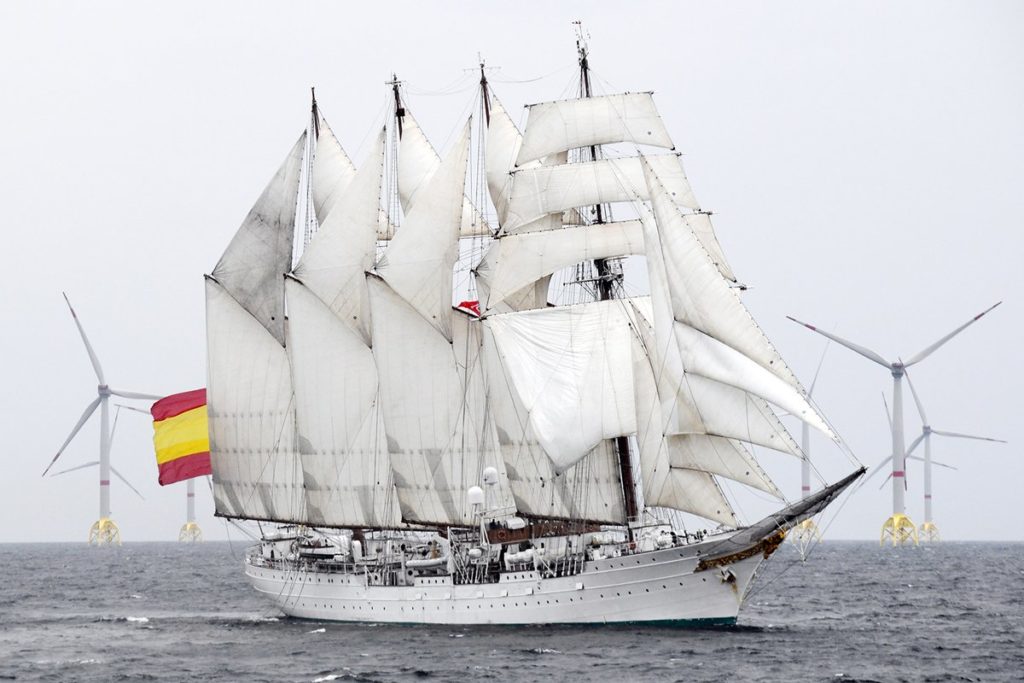 The two 1.45” (37 mm) cannons used for the salutes are on the Forecastle zone, where the bowsprit with the figurehead and where the workings are executed, without forgetting that just below are the lower decks, toilets and lockers. On the Waist we can meet the main front mast, called Almansa, and the foremast, called Blanca. What has been arranged in this part? The bridge, the radio and meteorological stations, the kitchen, the dining rooms, the operating room, the sick bay and the defeat rooms. 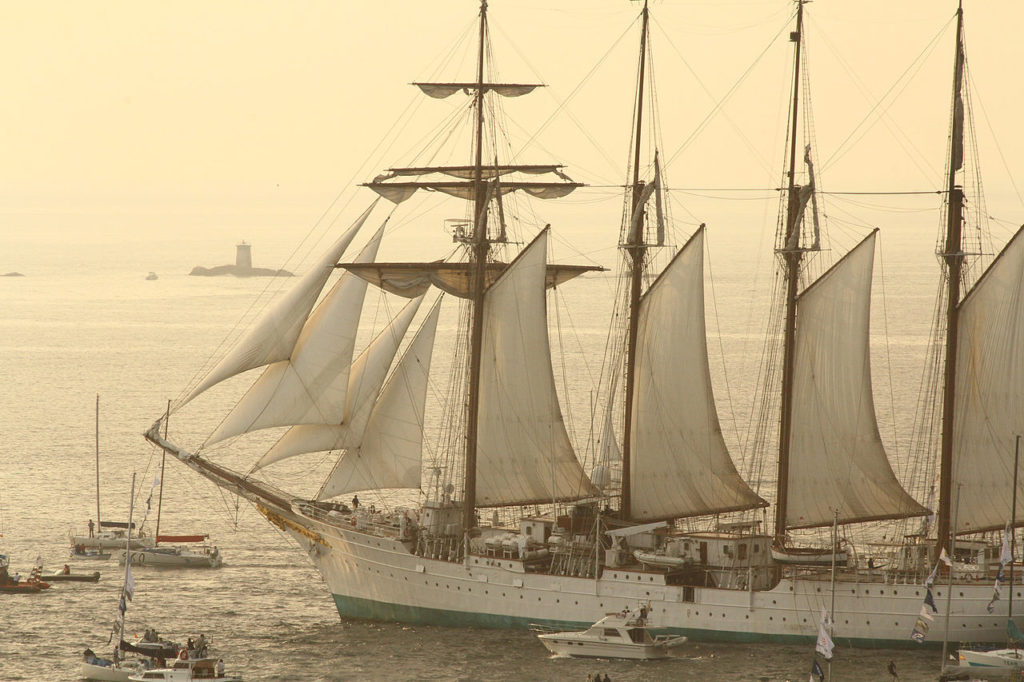 Speaking of its propulsion, Elcano has a total of 20 sails, covering a gigantic area of 3,151 square meters, however, it also has a diesel engine to be able to navigate with a power of 2,070 cv approximately, reaching speeds of up to 16.5 knots.

About its armament, Juan Sebastian Elcano school ship possesses 2 cannons of 37 millimeters, 2 Browning machine guns of 12.7 mm and 2 MG-1 machine guns of 7.62 mm. Its crew is composed of 197 people, of which 24 are officers; 22, non-commissioned officers; 146, sailors; and 5 civilians. In addition, it has capacity for up to 78 midshipmen. 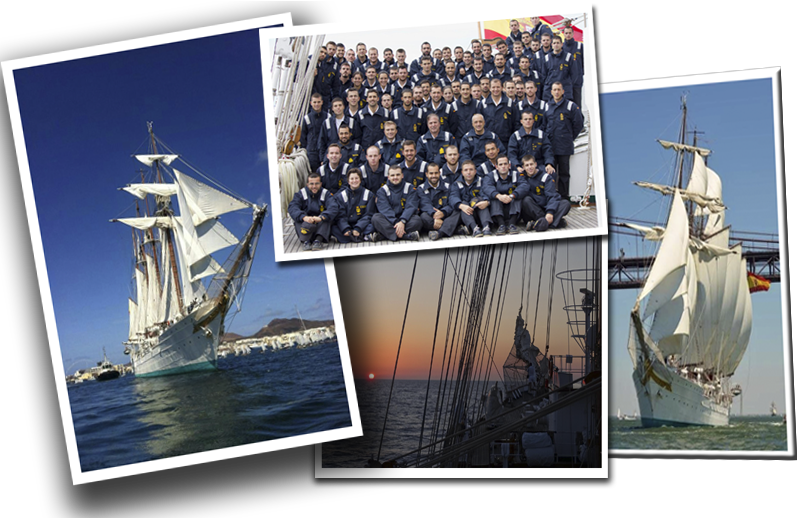 On the video below, we present it in all its glory after being built.

Give the final touch to the scale model of Elcano and Esmeralda painting it with its Set of Paints, for sale separately. Perfect finishes! 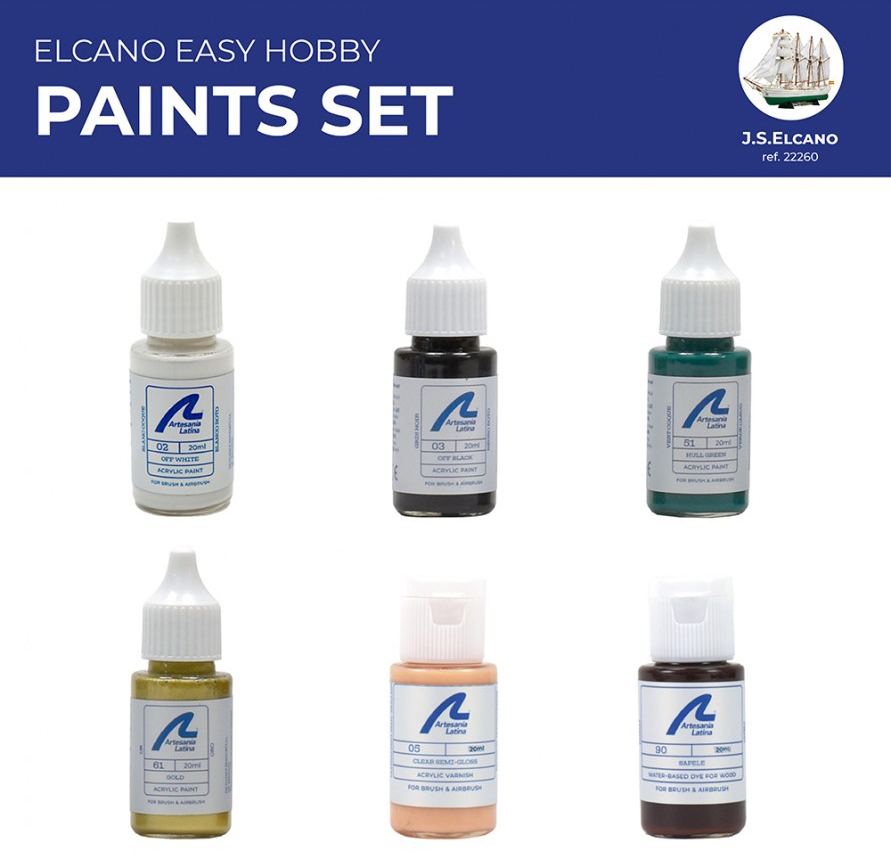 In conclusion, with this fantastic naval modeling kit … You will have enormously fun and motivating times! Do not hesitate to give it to a family member or friend on these approaching dates. Or give yourself a gift! Start the path of naval modeling with us!