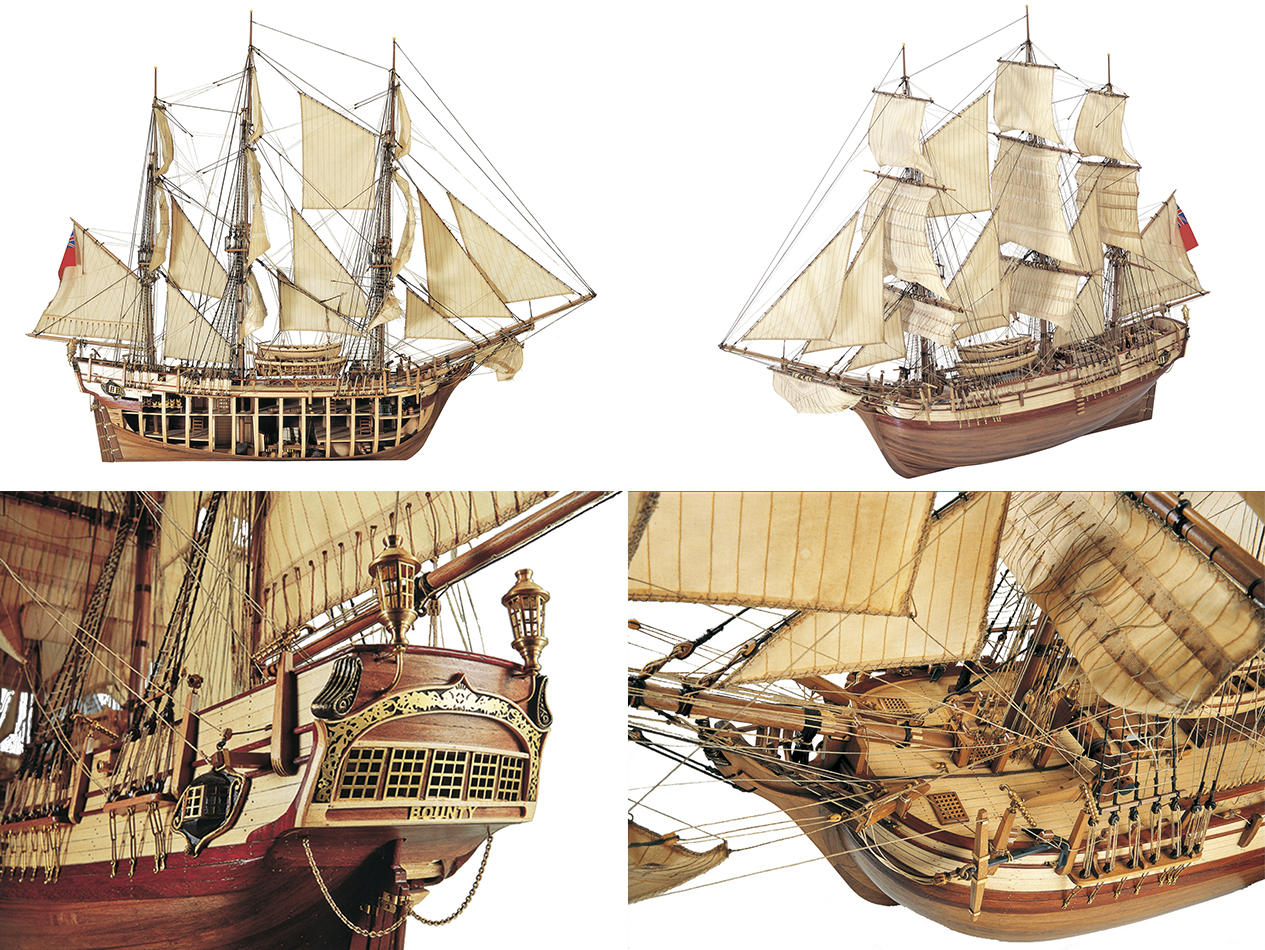 This post is aimed at showing our catalog of naval modeling for experts to our modelers friends. How? Of course, thanks to the great Artesania Latina ship models. Small artworks designed for our customers with the highest level of skills and abilities on this passionate hobby. For those who build the most difficult wooden ship models. If you are qualified to assemble a naval scale model of this article, you are definitely a master of model makers. They have already passed levels of knowledge and skills in naval modeling as initiation, intermediate and advanced. Here are all the ship miniatures for experts in our catalog:

The first proposal that we make of a naval modeling for experts kit is the wooden model ship of the well-known British tea clipper Cutty Sark, at 1/84 scale. It was one of the fastest vessels during the 19th century on its many voyages to the East. The Cutty Sark was dedicated in the early days after its launch in 1869 to the tea race. He tried to unite China and London in the shortest time possible for eight ‘tea seasons’. Later, he took on another role, in this case on the wool trade from Australia. Later he assumed the transport of goods between Porto, Rio de Janeiro, New Orleans, Lisbon and the Portuguese colonies. It was operational until 1954, the year in which it was decided to exhibit as a museum ship. 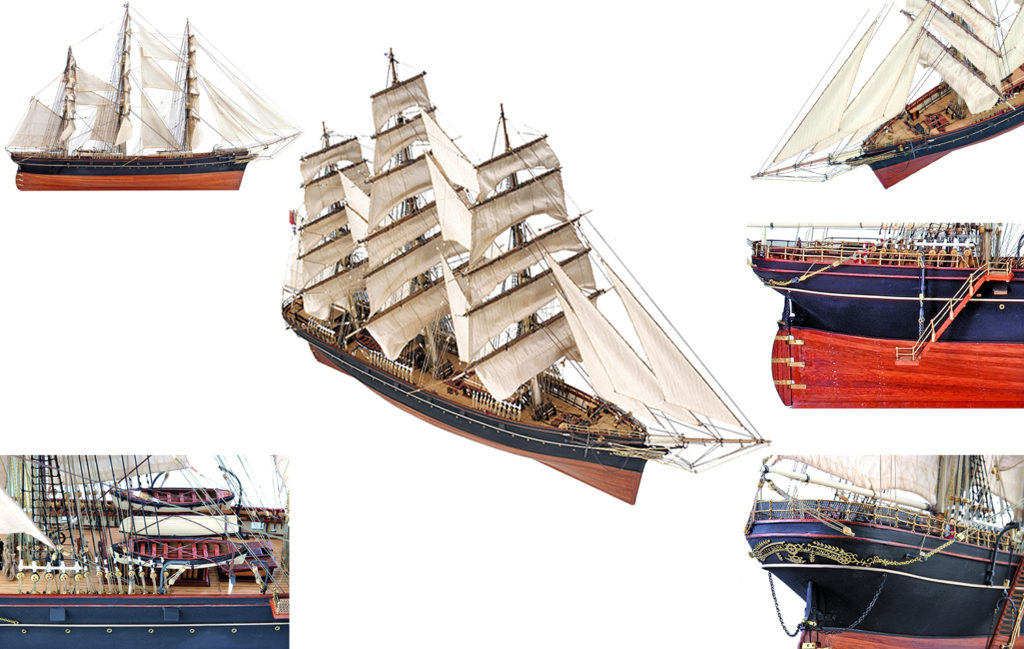 The British Cutty Sark Tea Clipper naval modeling kit for experts features high precision laser cut board parts, hardwoods, brass, cast iron and fabric. For the assembly you can follow our complete step-by-step guide in 7 languages ​​and in full color, accompanied by the full-scale plans of the finished ship. All on DVD format. Once built, the model measures 40.62” (1032mm) long x 13.77” (350mm) wide x 24.56” (624mm) high.

The second alternative of naval modeling for experts is the wooden ship model of the 18th century British frigate HMS Bounty, 1/48 scale model. This boat was the scene of one of the most famous riots in history. In 1787, the HMS Bounty left England for Tahiti to transport breadfruit trees to the Caribbean, encountering a great storm that forced them to change course, and to land and stay in Tahiti for several months. The crew got used to life with the natives and mingled with their women, until in 1789 they sailed again, but 24 days later they mutinied. 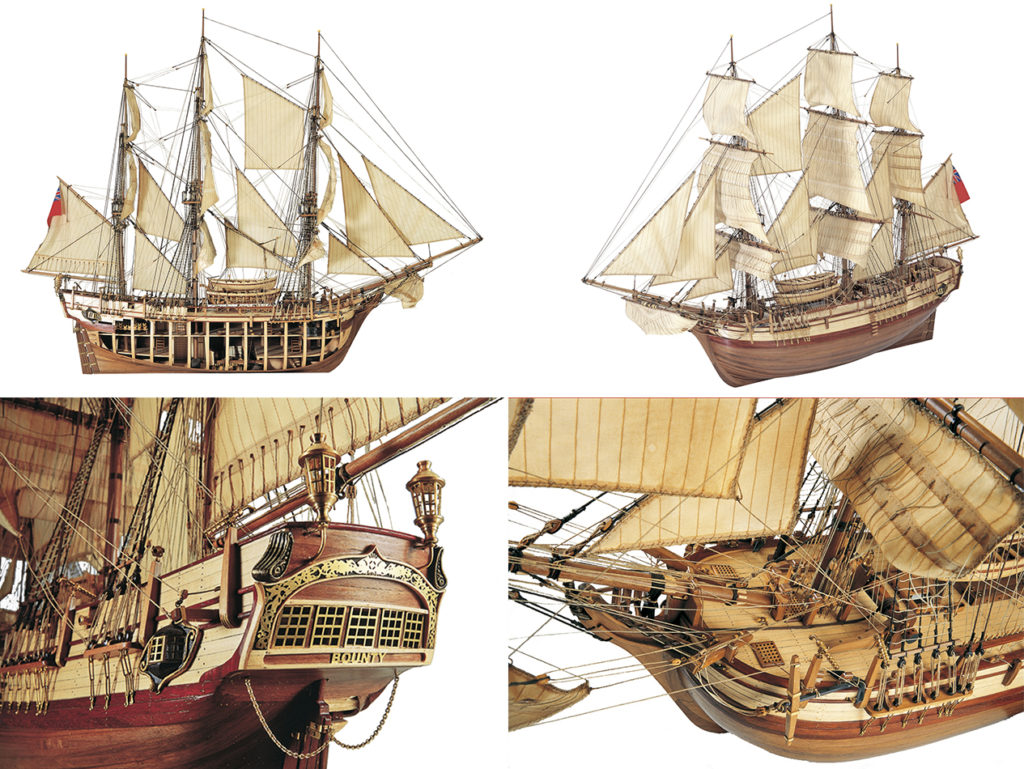 Naval modeling kit for experts of the HMS Bounty frigate composed of parts of high precision laser cut board. In addition, it has noble woods such as birch, brass, cast iron, fabric, cotton threads, hand-sewn candles ready to be placed … And most importantly! For the assembly of the scale model you will have our complete step-by-step instructions in four languages ​​in full color, accompanied by the real-scale drawings of the completed ship. All on DVD format. As a differential fact of this scale model, the HMS Bounty boat allows one of the hull bands to be left open to see its interior precisely. When the scale model is finished, it measures 35.58” (980mm) long x 13.97” (355mm) wide x 30.03” (763mm) high.

The third option for the expert modeler with a high level of knowledge and skills in building wooden model ships is the American frigate USS Constellation, a 1/85 scale model of the US Navy. He had to develop numerous and different activities during all the years in which he was on duty. The frigate was built at the end of the 18th century, specifically, in 1797 in Baltimore. It served to seize many ships, prevent the British from annexing the Hawaiian Islands in 1843, and for the United States to arrive in China for the first time a year earlier. From 1845 to 1849, he was in charge of transporting food to Ireland to fight the potato famine. In 1871 it would become a naval training ship. Today it is a beautiful museum ship that can be visited. 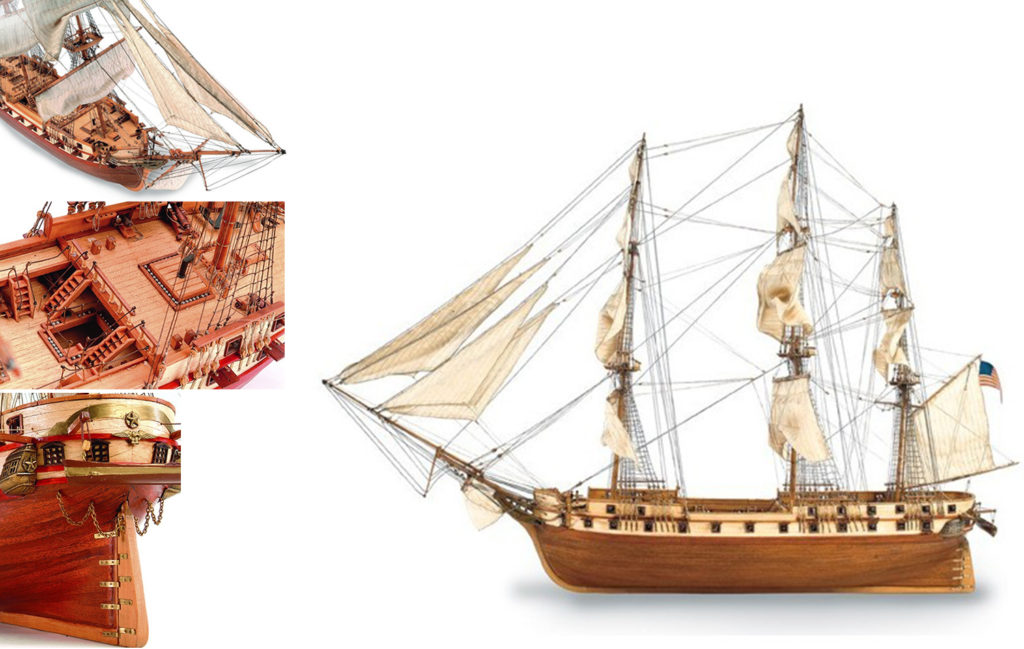 What is the fourth expert naval modeling kit we showcased? A legend in Spanish naval history, the 1/90 scale wooden model of the Spanish online ship with 74 cannons San Juan de Nepomuceno, from the 18th century. He was part of the Spanish Armada between 1766 and 1805. He was captured in Trafalgar by the British and transferred to Gibraltar, although he represents a beautiful demonstration of the heroism and bravery of the Iberians in the battle that took place on the coasts of the province of Cádiz. 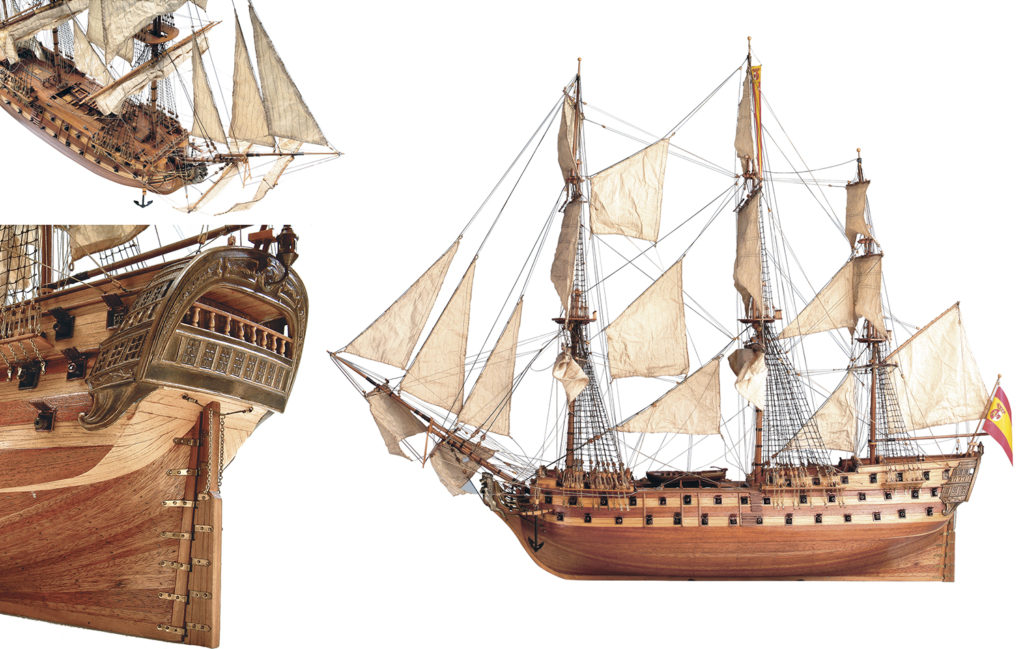 The fifth wooden model ship that we urge expert modelers to build… It’s new in 2021! The 1/65 scale model of a jewel of naval modeling created in the 17th century: the Swedish bronze warship with 64 guns called Vasa, which is part of the naval history of your country, Europe and the planet: it sank within a kilometer of being launched in 1628 after an economic outlay and use of enormous natural resources by King Gustav II, who wanted the ship to participate in the Thirty Years’ War. It was the most powerful of its time until the US Constitution frigate appeared. 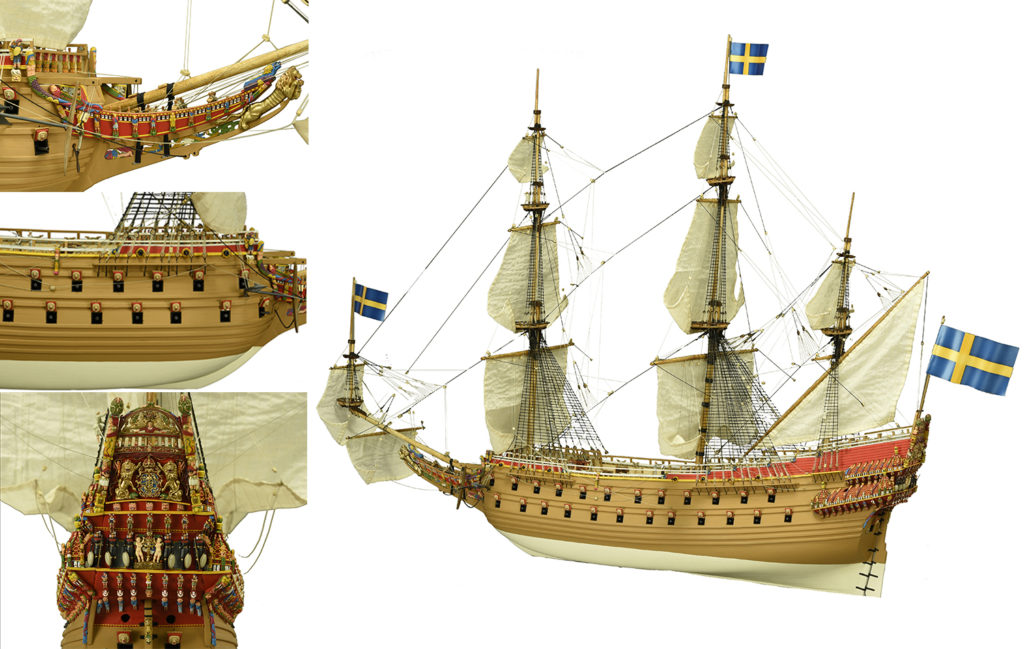 The Vasa Swedish warship modeling kit is one of the most detailed in history on the market, it has a large number of sculptures on its stern and bow. The expert modeler will find a large set of decorative parts in die-cast and photo-etched and Premium quality wood pieces. Of course, hand-sewn sails ready to be placed, multimedia instructions in nine languages and… Two gifts included! A wooden base with a metal name plate and six figures that will give this naval jewel even more realism than it would have without them. Very detailed step-by-step instructions and video tutorials, all on DVD format.

The sixth and last -currently- wooden ship model that we propose that expert modelers build… It is another fantastic novelty for this year 2021! The 1/72 scale model of one of the pink diamonds of naval modeling, built and launched in the 17th century by order of the French King Louis XIV. The majestic Gallic warship Soleil Royal is your new challenge. This famous ship of the line with 104 guns was born between 1668 and 1670 in Brest thanks to the engineer Laurent Hubac.

Interestingly, it remained unused in the port of that town for a long time. It sailed the seas again during the Nine Years’ War in 1688, already with 112 guns and 1,200 crewmen. Its role was essential as the flagship of the Escadre du Pont (Squadron of the West) and Admiral Tourville. Its baroque decoration is simply one of the most beautiful and spectacular of the time. 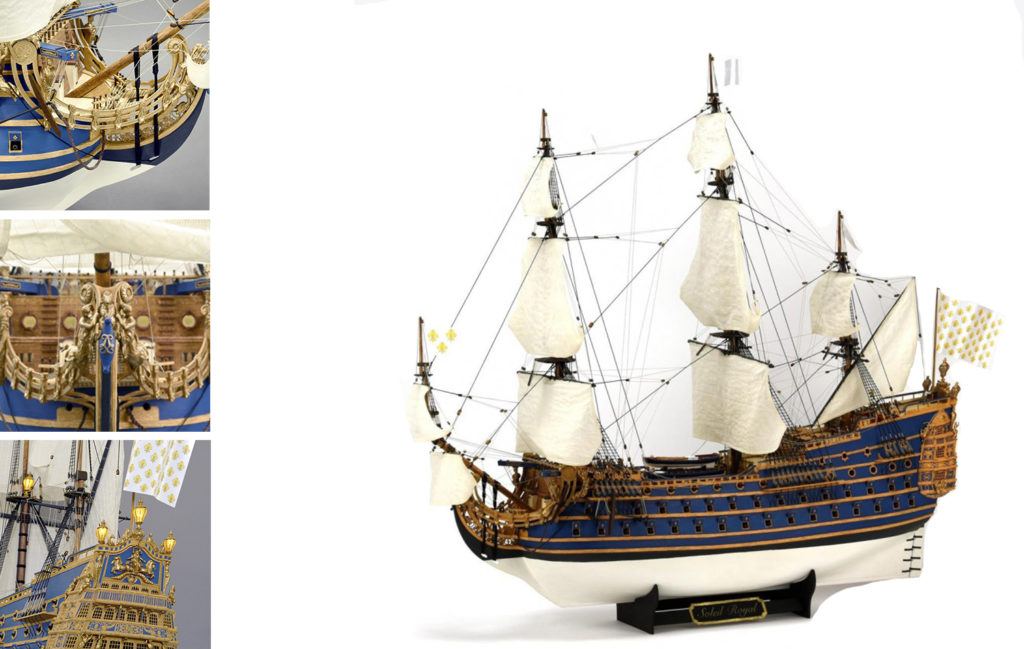 The naval modeling kit for expert modelers with the Soleil Royal warship is one of the most detailed ever. Hundreds of high precision laser cut plywood and solid wood parts are available. Also many castings in die-cast and photo-etched, not forgetting the magnificent cotton sails sewn by hand ready to be placed. It is a Premium model that also brings as a gift the stand for display and a set of 12 figurines. It contains our comprehensive step-by-step instructions, accompanied by highly accurate video tutorials. All on DVD format. Once assembled, the scale model measures 36.81” (935mm) long x 11.22” (285mm) wide x 34.44” (875mm) high.