After more than six years of waiting and hundreds, if not thousands, of emails sent by our customers friends requesting a highly desired product from Artesania Latina, we are going to brighten your day! As a radiant novelty for 2022, we are excited to present you the new and limited edition of Trafalgar 1805 Santa Ana model ship (22905-N) at 1:84 scale, the faithful replica in miniature of the Spanish line ship with 112 cannons launched in the last quarter of the nineteenth century. And most importantly, an essential vessel in the Battle of Trafalgar between the Bristish Royal Navy and the Spanish Armada at the beginning of the following century. Of course, now we bring you a renewed ship model building kit aimed at elite modelers. 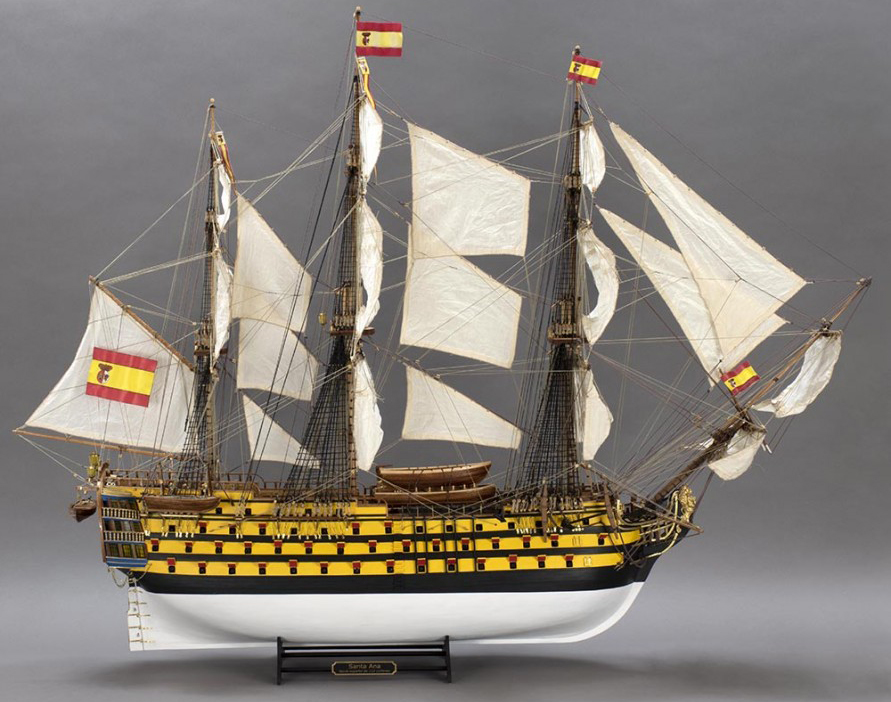 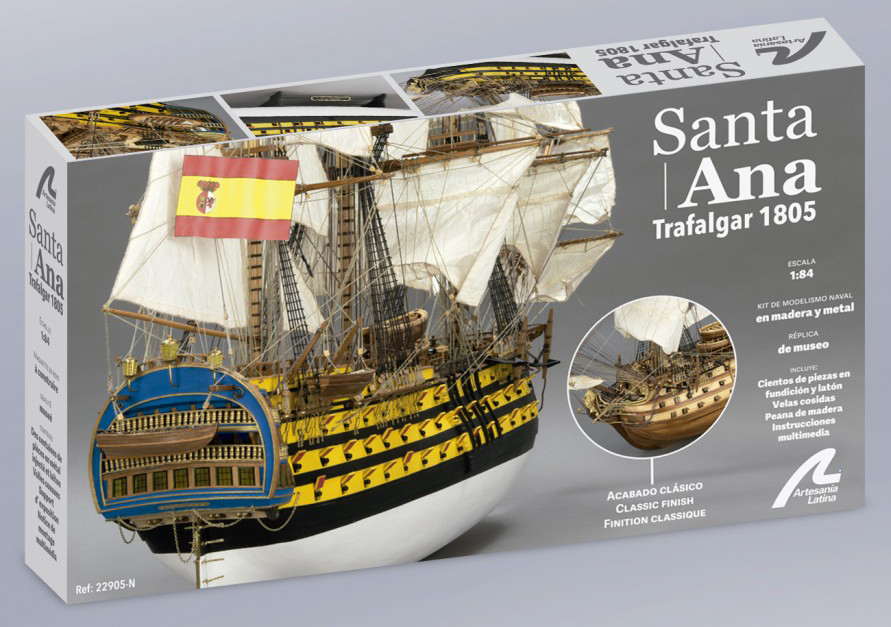 The renewed wooden naval modeling kit of the famous Spanish ship of the line Santa Ana at 1:84 scale was the prototype of a series of 8 identical vessels that would constitute the nerve of the Armada. The modeler will be able to find in this new limited edition of the kit hundreds of high quality parts such as strips, rods and sheets of solid wood and plywood of basswood cut by a precision laser. Also, a spectacular 373 x 110 mm brass photo-etched plate with the finest details such as lanterns, railings or details of the cannons.

Of course, pre-sewn sails made of cotton fabric -ready to be placed- and cotton threads of different colors and thicknesses. We cannot forget the acetates, the nets and the flags. As a bonus so that the model is perfectly displayed, like an artwork that it is, a wooden exhibition base with a metal plate. 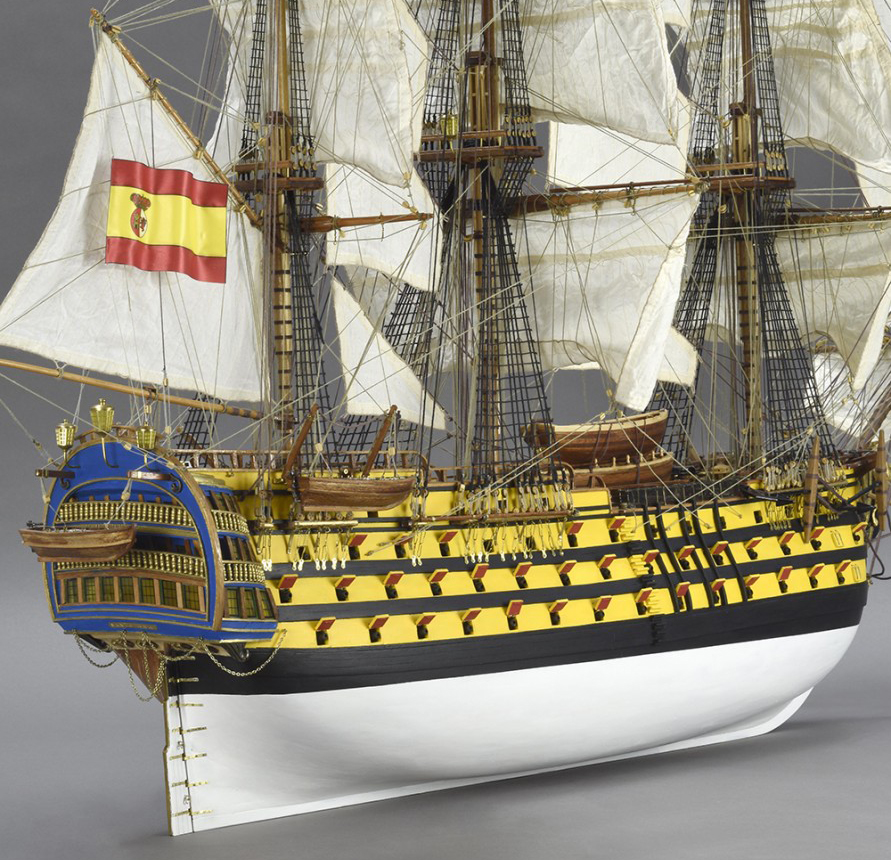 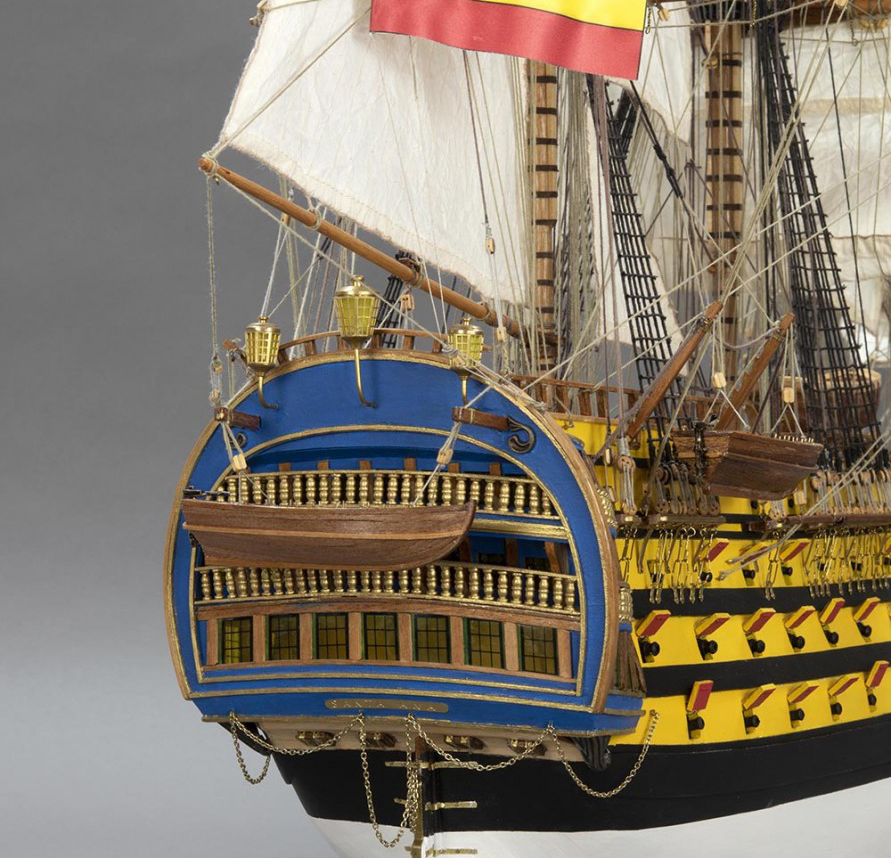 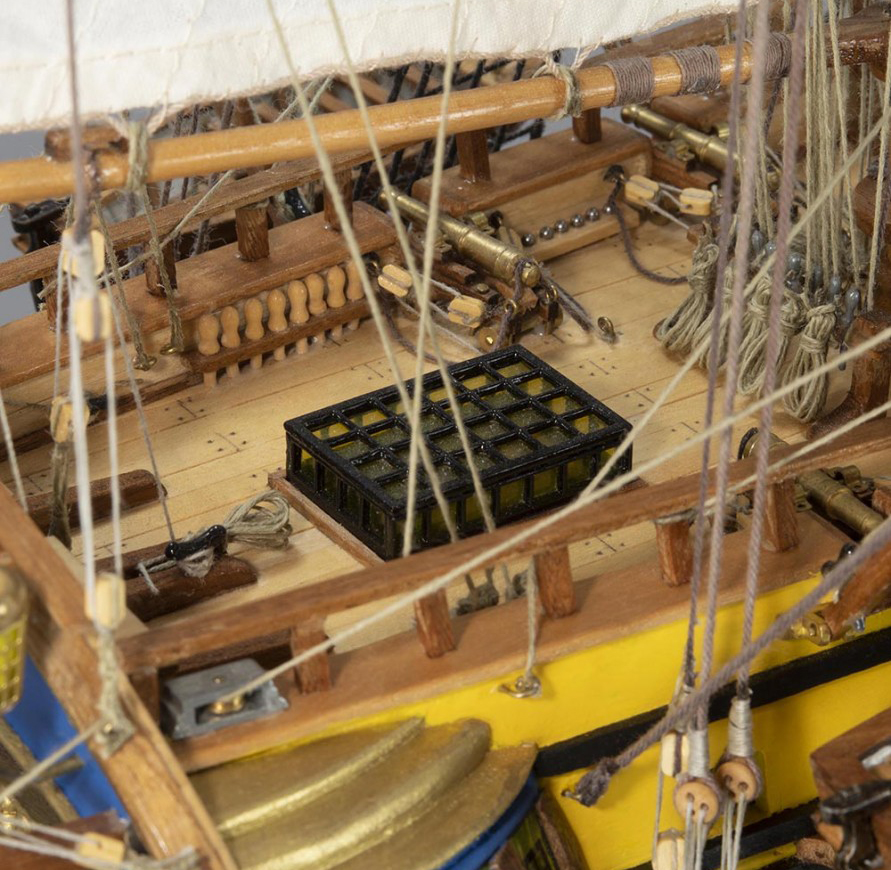 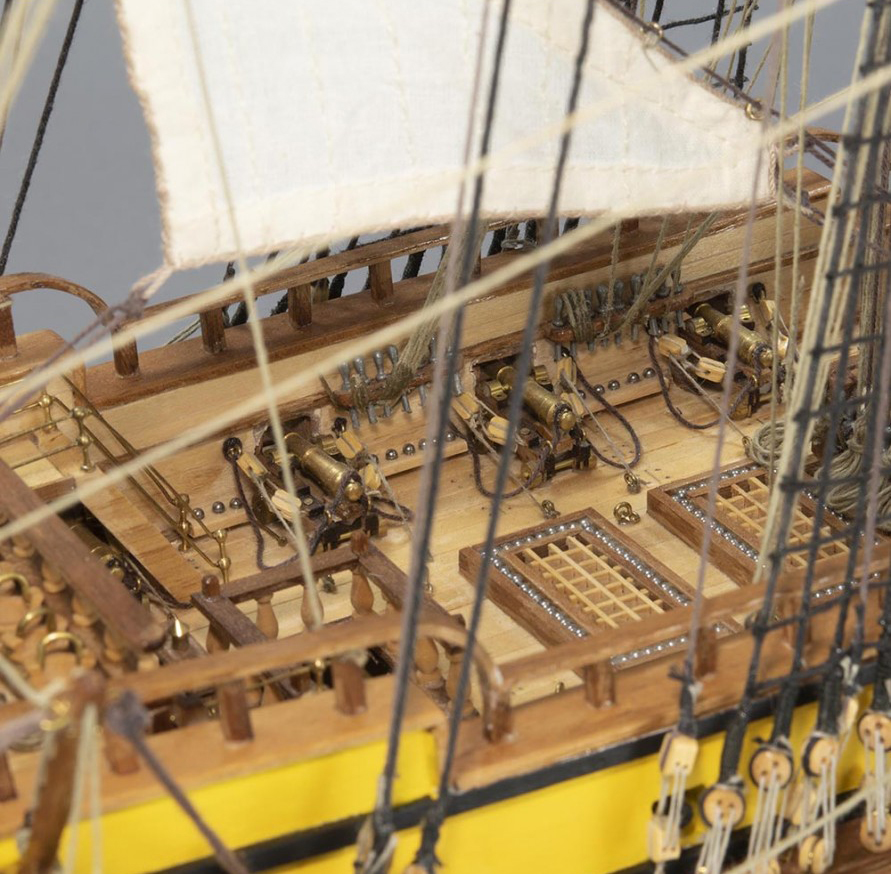 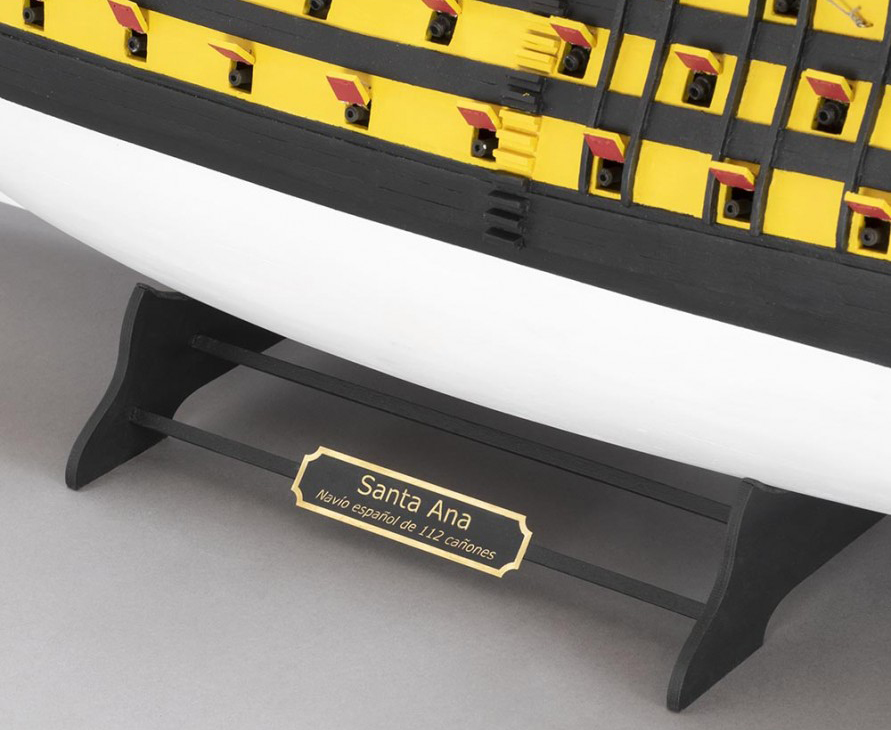 With this Santa Ana model ship, you can represent the appearance and artillery of the boat correctly in the battle of Trafalgar. The crowned rampant lion figurehead is a new design. New artillery, corrected in scale and now much more detailed including photo-etched parts, has the howitzers that the ship carried in Trafalgar. The previous metal lifeboats have been replaced with a more realistic wooden construction. 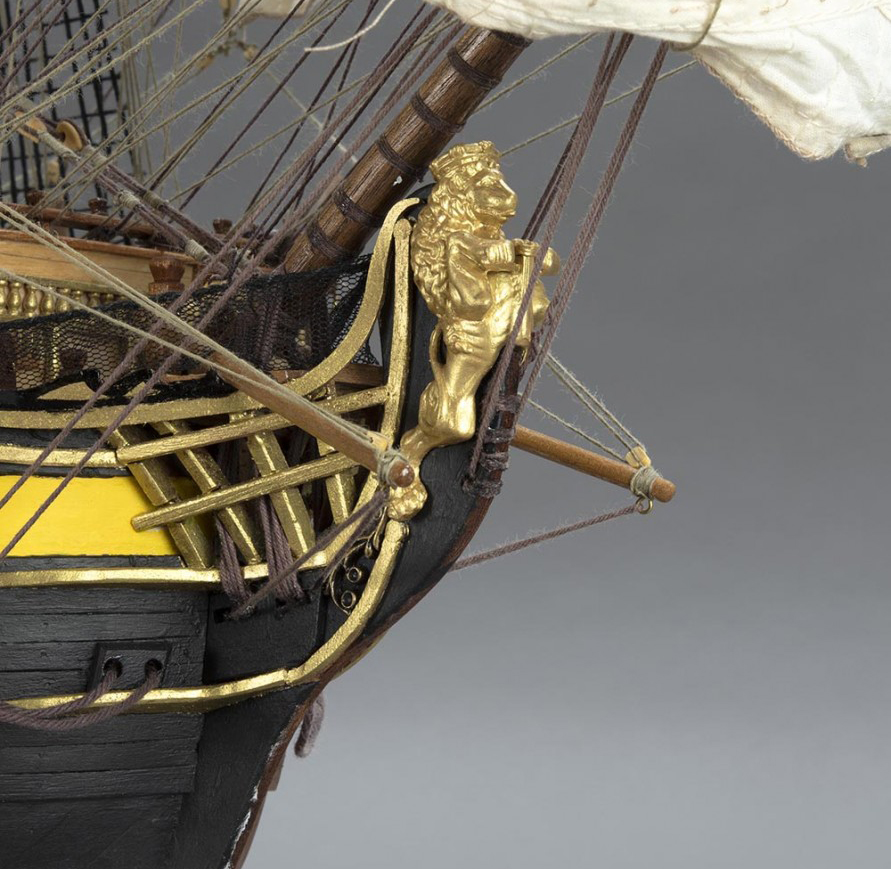 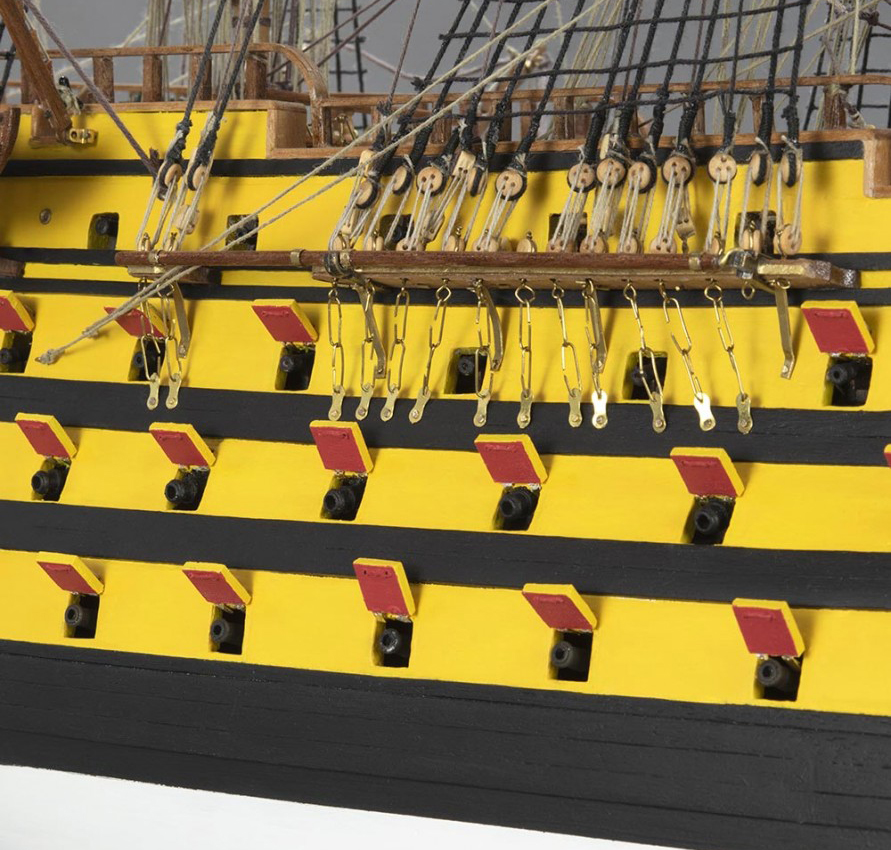 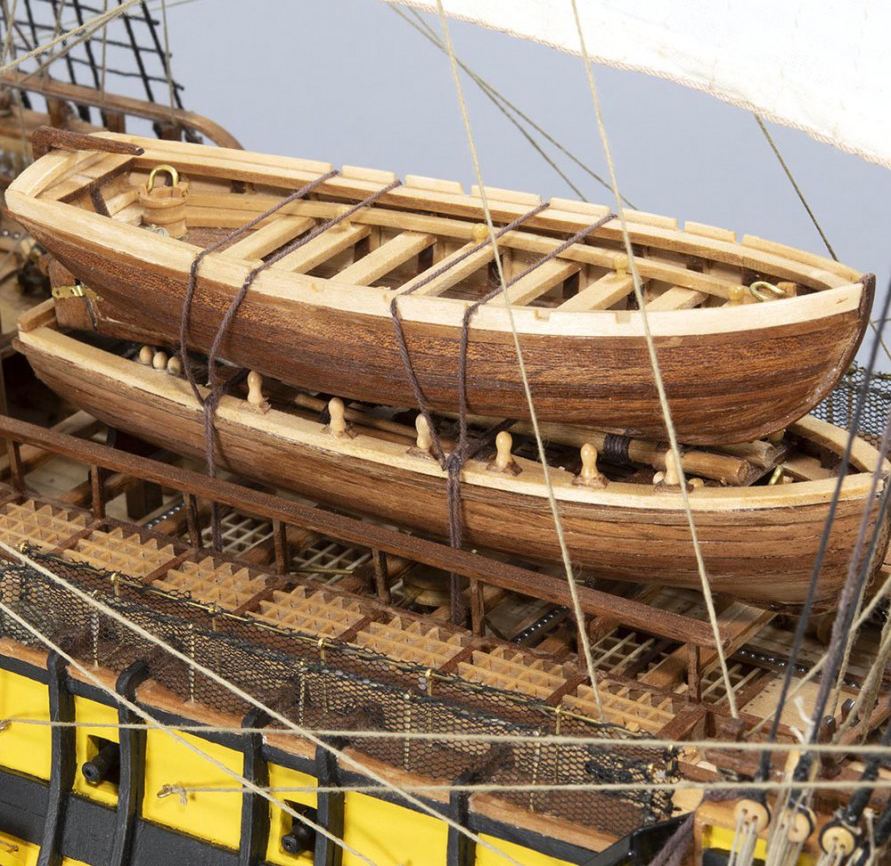 Do you still need to see more to be amazed due to the beauty of the new Spanish ship of the line Santa Ana Trafalgar 1805? No problem. Just below there is a video in which you can watch all the contents, the so-called ‘unboxing’, of this spectacular wooden ship modeling kit.

Once Santa Ana model ship (22905-N) is built, it measures 46.45” (1180 mm) length, 34.25” (870 mm) height and 18.11” (460 mm) width. Its design by means of false keel and frames brings its assembly closer to that of the real vessel. And how to assemble it? The modelers and 3D designers who work at Artesania Latina have redesigned all the old instructions. Colour arrives to the Spanish ship of the 18th century! Now, you will be able to appreciate the different assembly steps much more clearly. Languages? Spanish, French, Italian, English, German, Dutch and Russian. 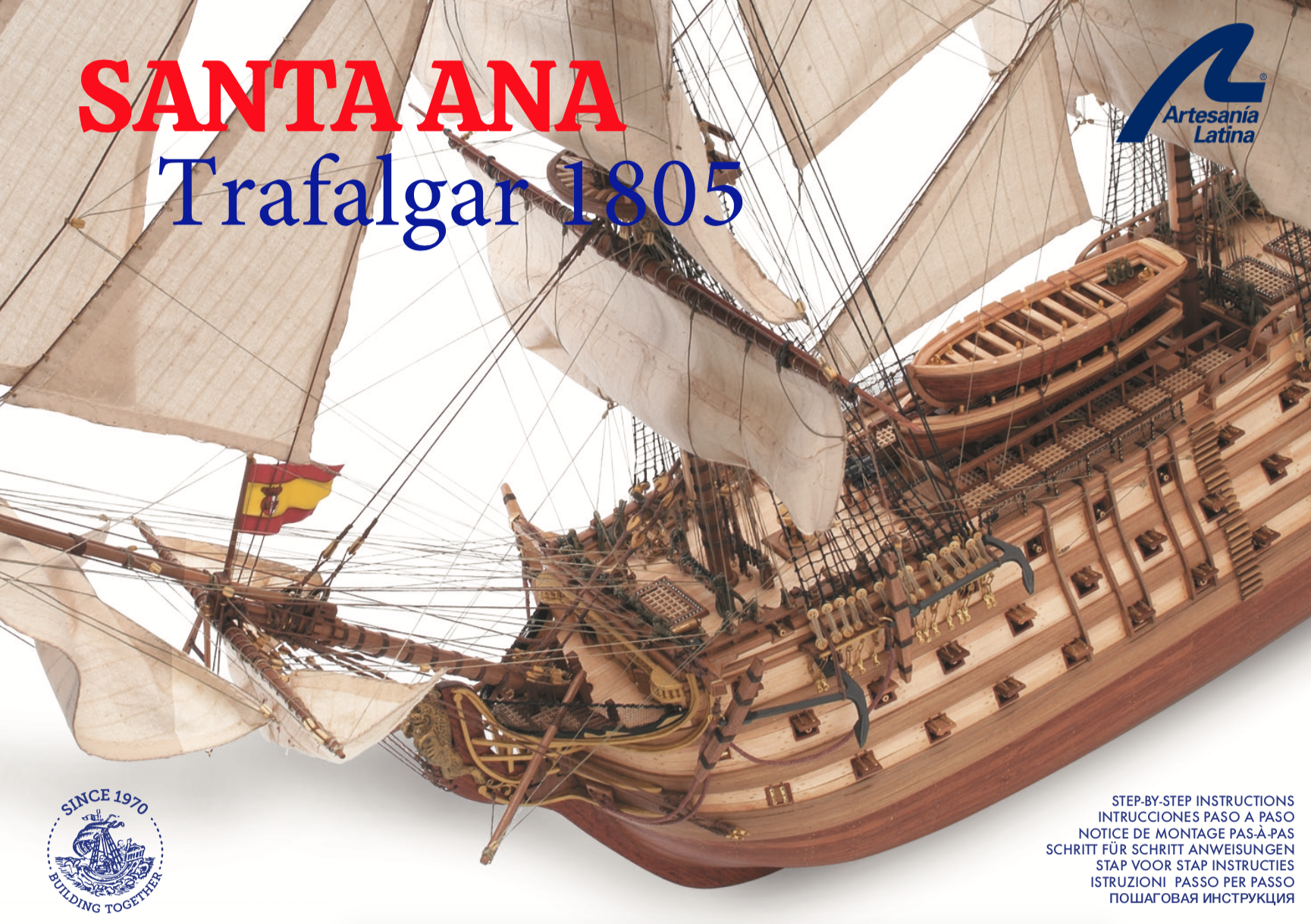 The wooden ship model kit has an instructions DVD for computer (Windows and Mac). Clearing step-by-step photos, as well as demonstrative videos with some of the most important steps. Printed instructions are not included. Remember that you can also download for free the instructions on the product sheet of this model on Artesania Latina website. It should be emphasized that now it also comes with a special guide -annexes- to assemble and decorate the model as it was in reality the ship during the Battle of Trafalgar. 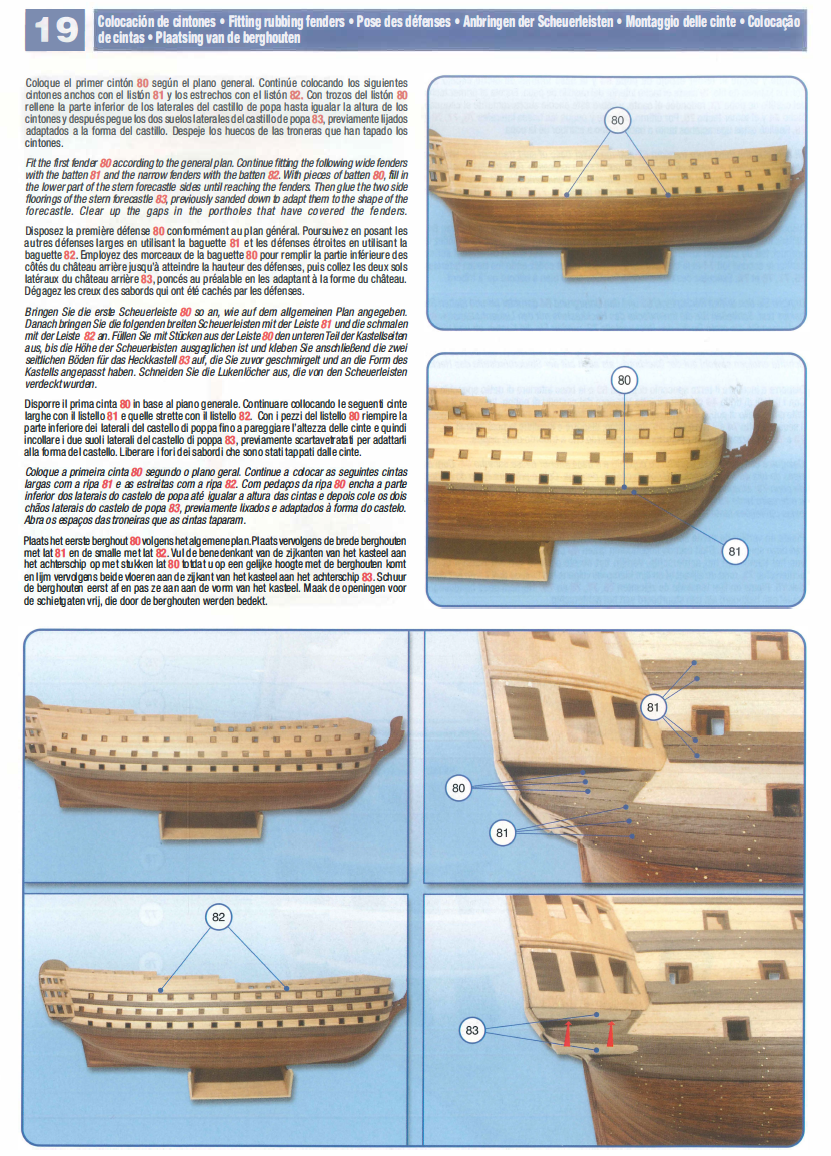 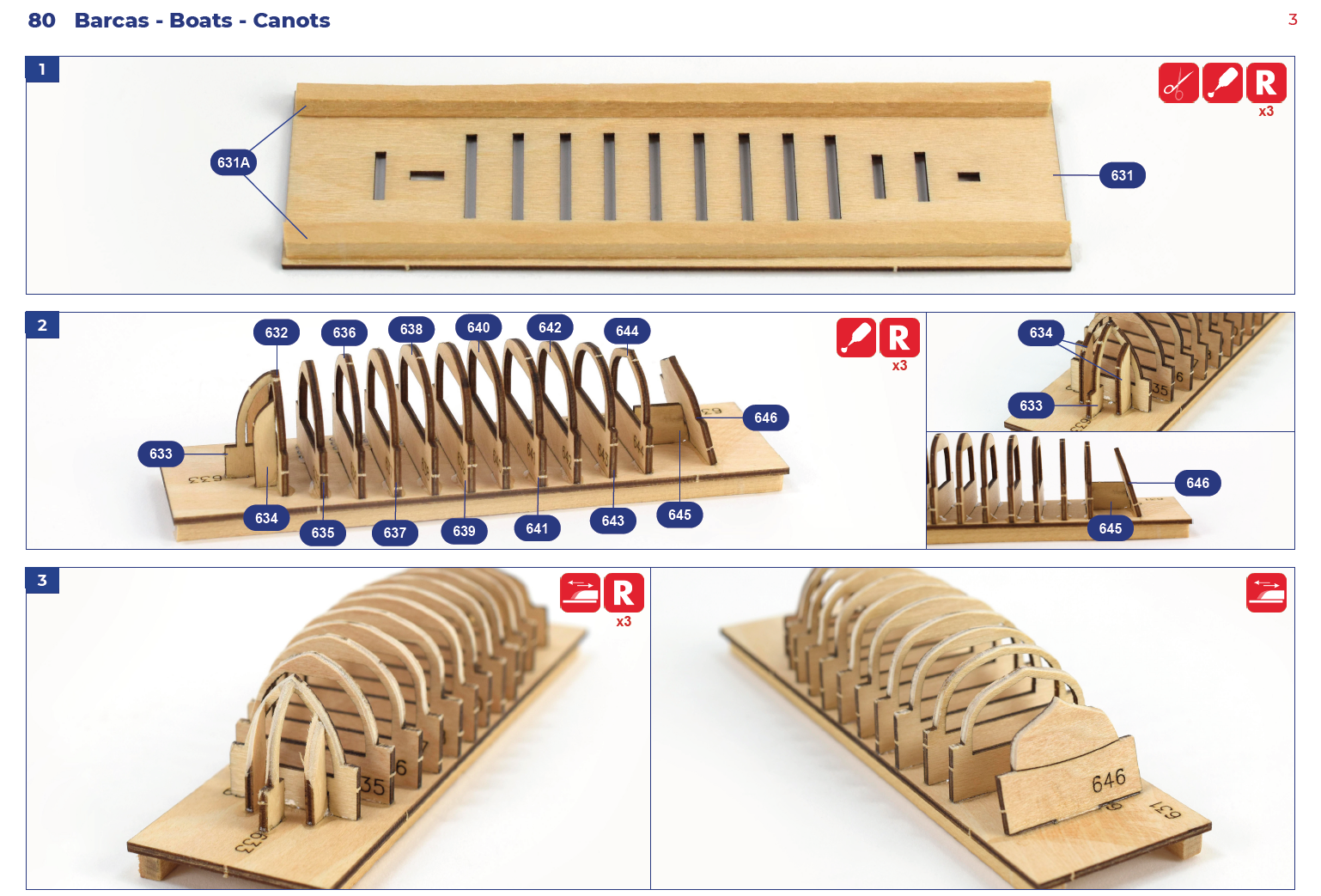 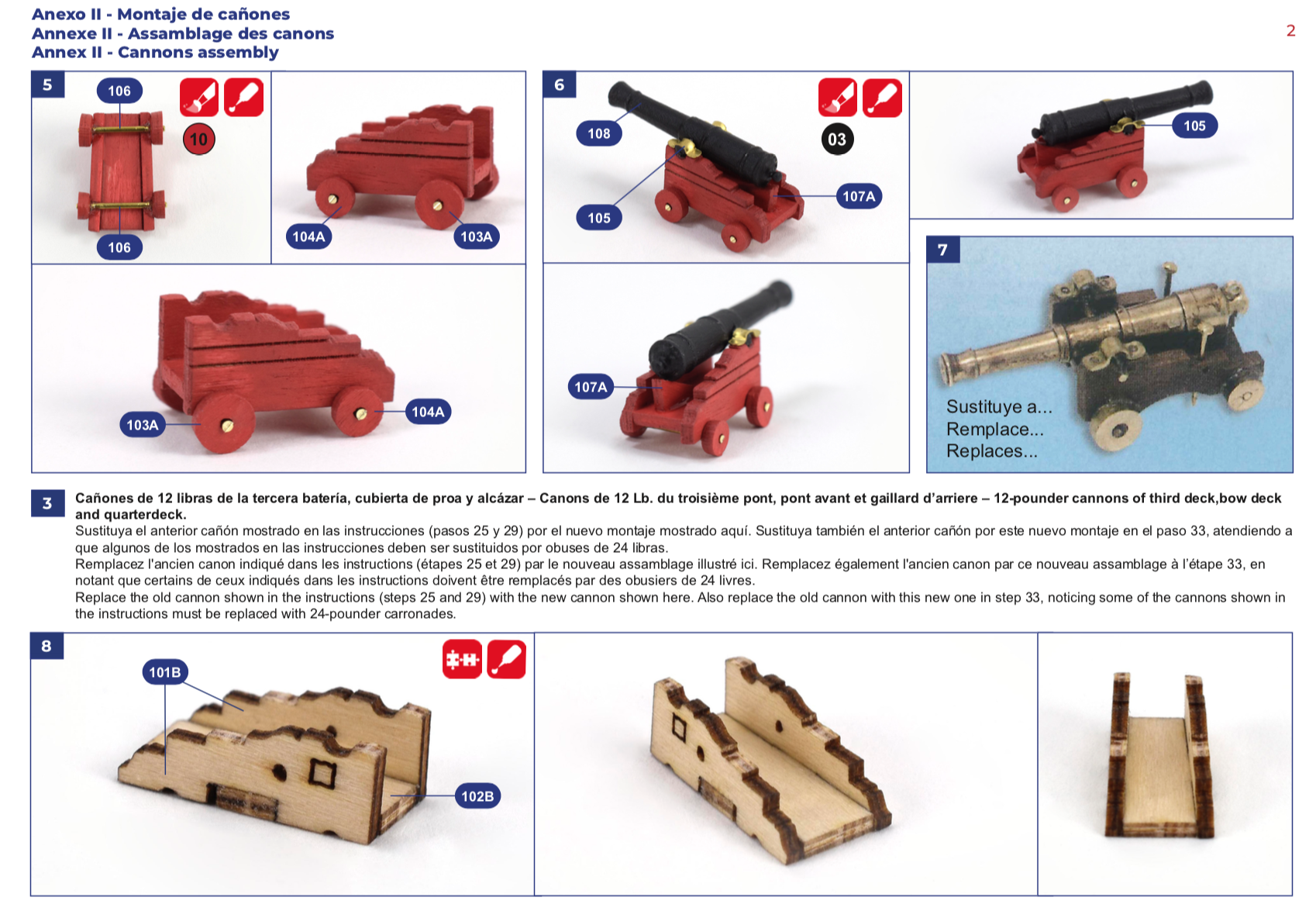 If you also want to see how Santa Ana model ship would look unpainted, with a more classic appearance, only with the sapele veneer, under these lines there are several photographs that show it, take a look at them! 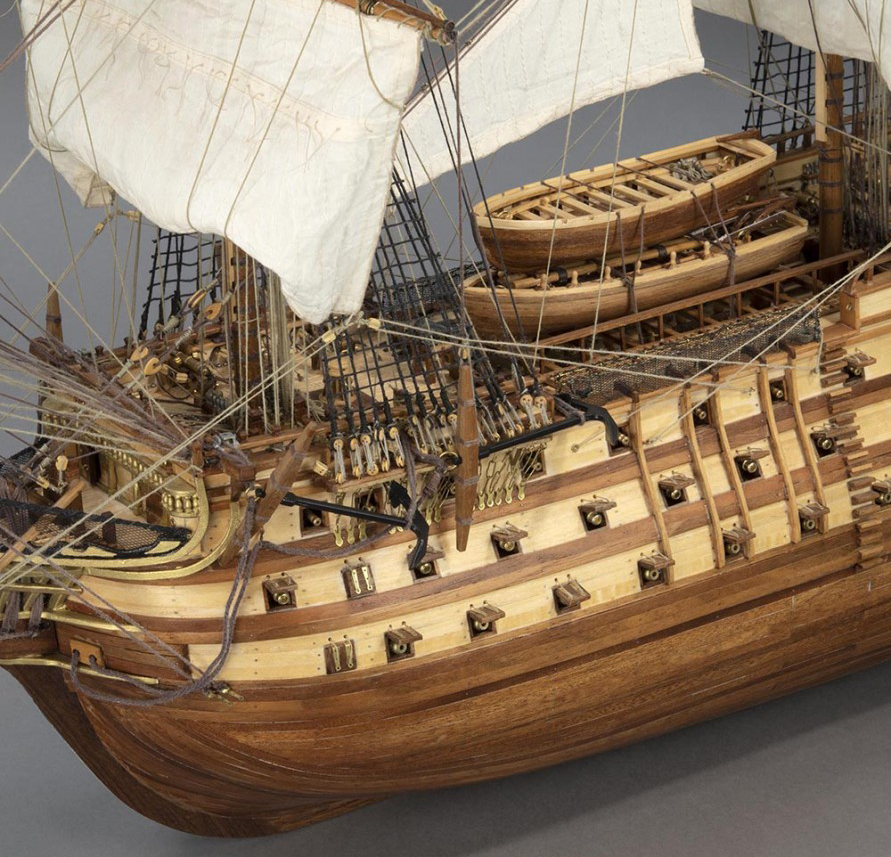 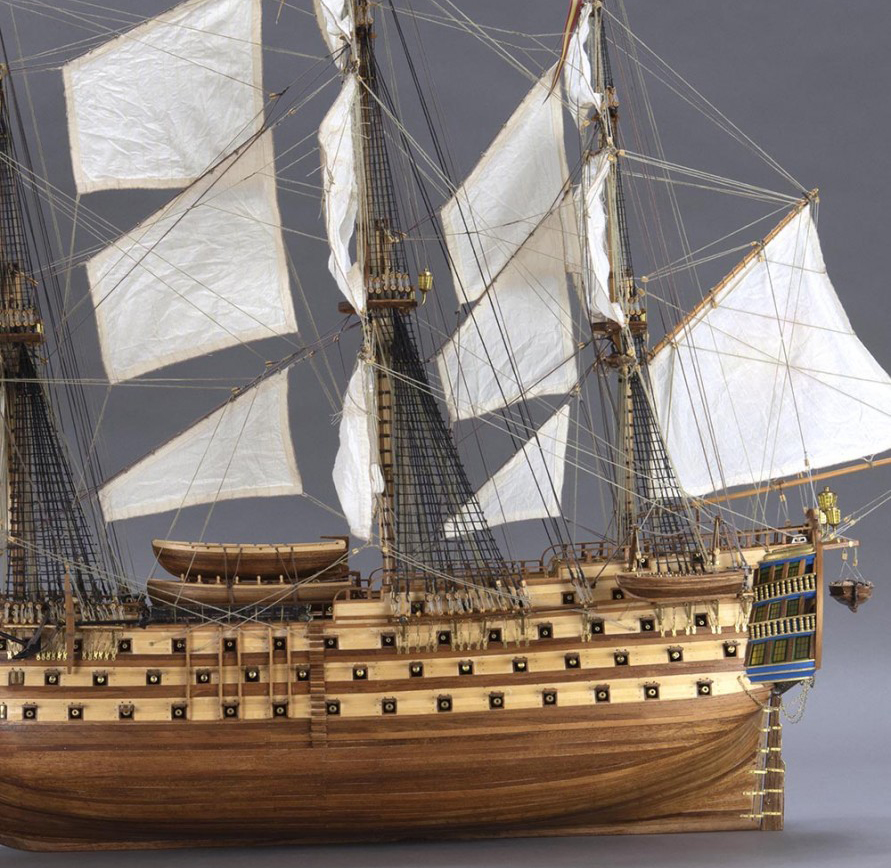 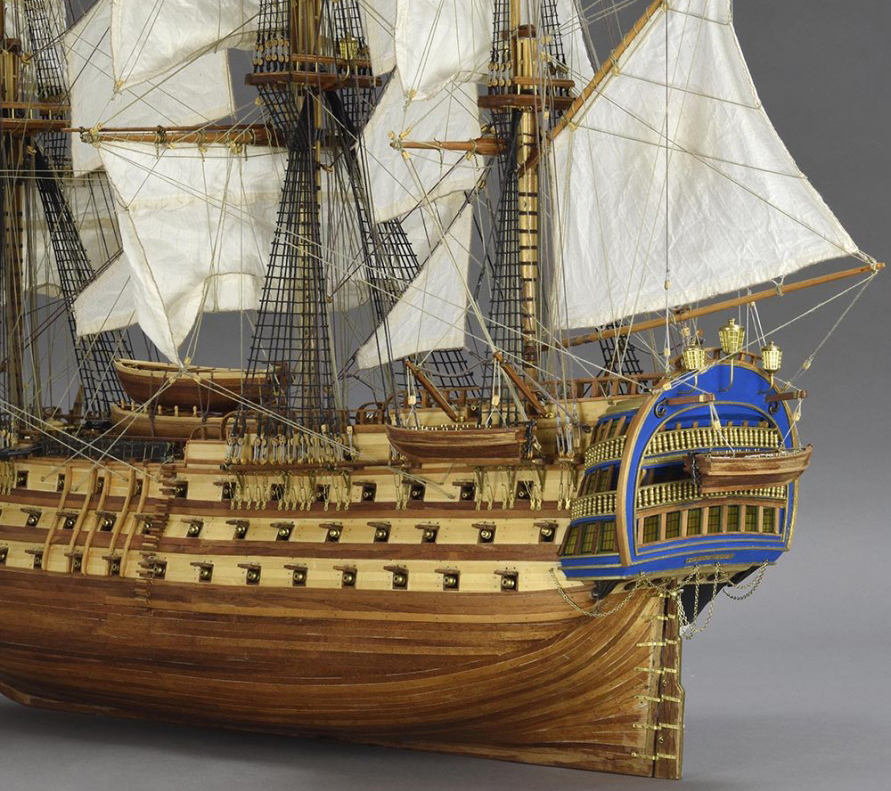 However, Artesania Latina modelers recommend to paint of the Santa Ana model ship with its Specific Water-Based Acrylic Paint Pack (277PACK22), for sale separately. The result of the finishes of the Spanish ship of the line will be much more realistic and visual. Quick-drying, the twelve different colors paints come in small 20ml pots. With off white, off black, bright red, FS11136 red, navy blue, ice yellow, chrome yellow, khaki yellow, cocoa, burnt umber and gold, your jewel of naval modeling will astonish anyone who sees it. 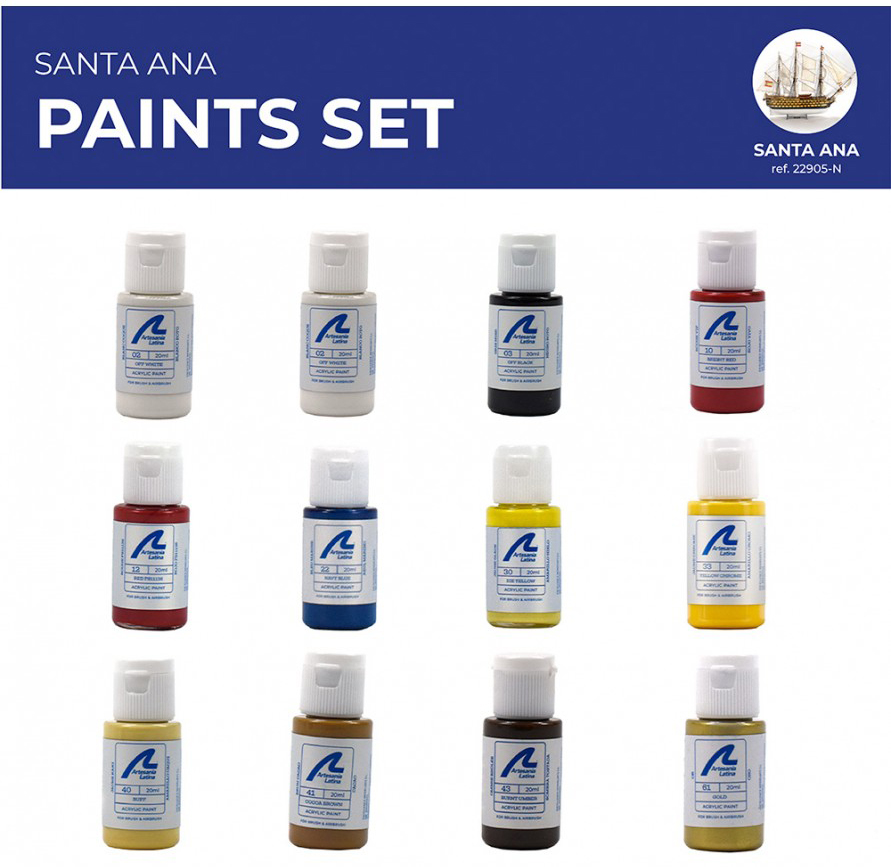 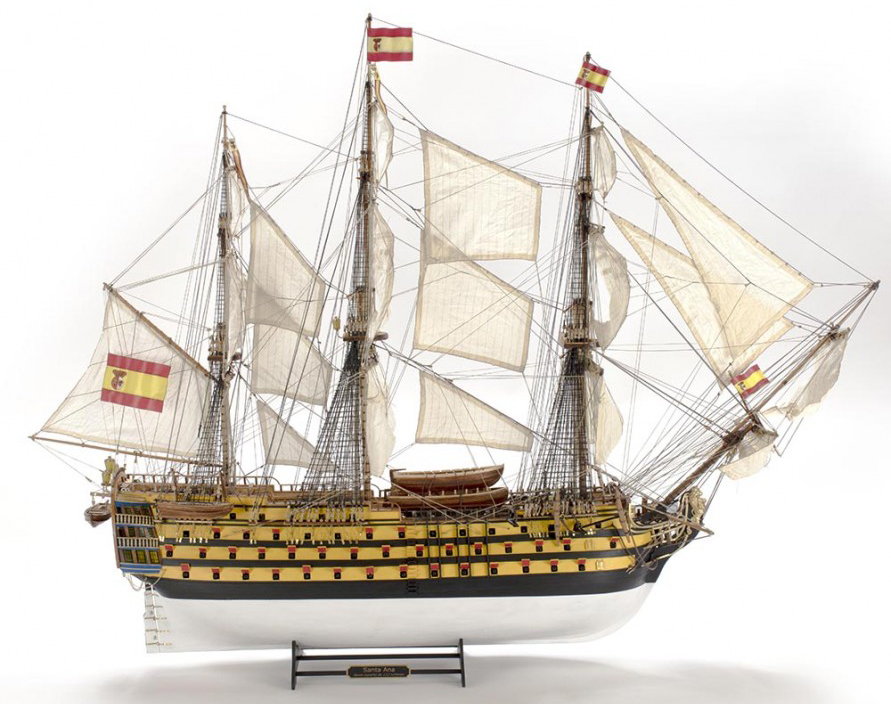 In short, built at the Ferrol Shipyards and launched in 1784, the Santa Ana was the first of a series of three-deck ships called the Meregildos. Captained by José Gardoqui, he intervened in the Battle of Trafalgar inflicting heavy punishment on the English ship Royal Sovereign. Attacked by several English ships, he was captured and later saved by the Rayo, Montañés and San Justo, who towed him to Cádiz in the middle of the night. He would end up sinking in Havana, where he had been sent to prevent Napoleon’s troops from capturing him. Now, you have the opportunity, once again, to build a fundamental piece of world naval history. Assemble this limited edition Trafalgar 1805 of Santa Ana model ship  (22905-N). Just watch the video below to fall in love!