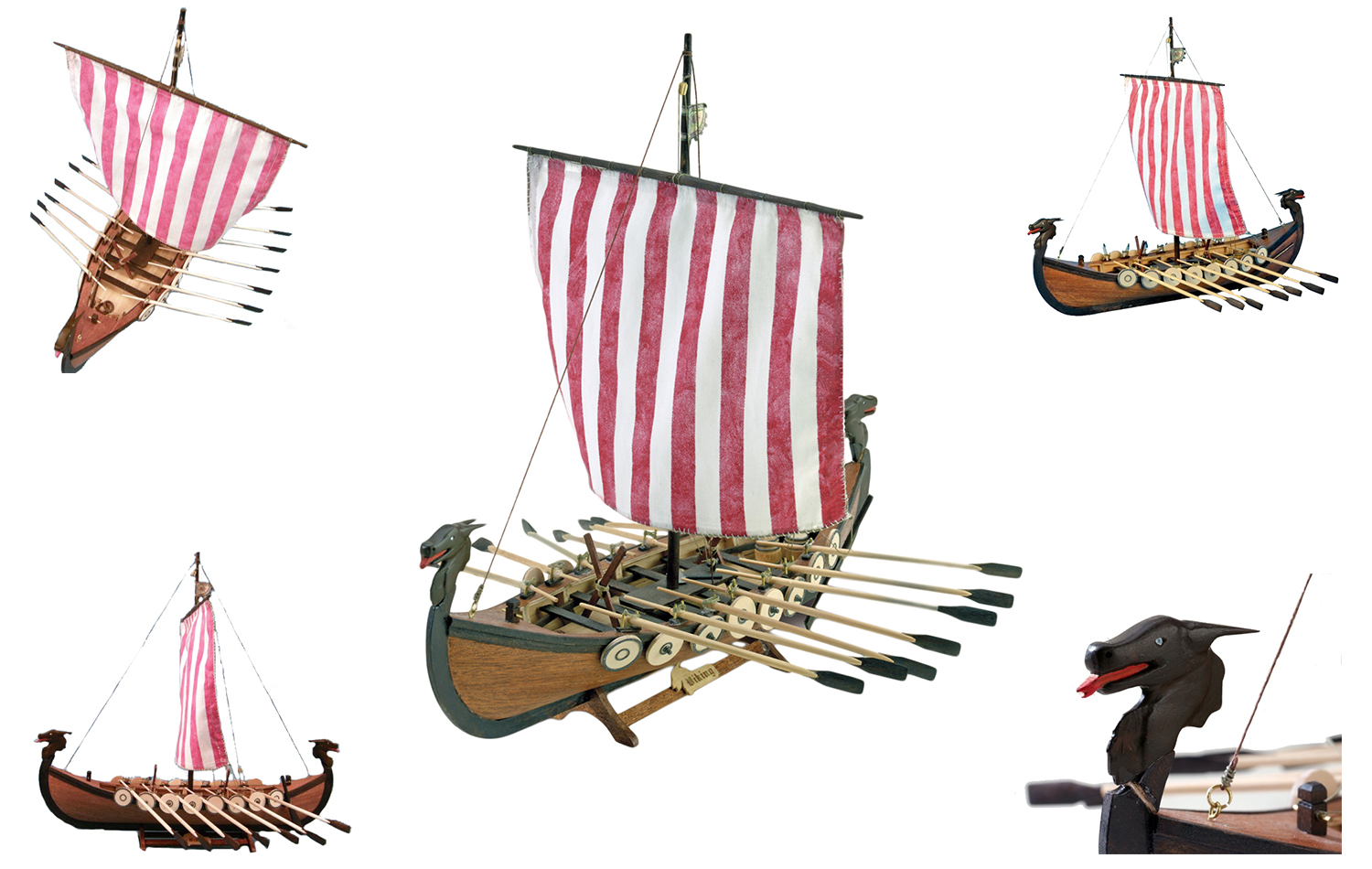 Many times, beginners on ship modeling go to Artesania Latina to guide them when it comes the moment to build their first wooden ship models. We are going to show on these two posts the initiation to naval modeling with the products that a new ship modeler can create from our catalog.

We start with the wooden model of San Juan Nepomuceno captain’s boat for its construction. This boat belonged to the line ship of the 74-cannon line, and we present its 1/25 scale miniature. From the 17th century, it would be part of the well-known Battle of Trafalgar, which Spaniards lost against English navy with Churruca in command, so it was towed and exposed in Gibraltar. Anyone who boarded the ship and entered the captain’s cabin should discover the head as a sign of absolute respect, showing the great relevance of the aforementioned ship.

This fabulous wooden ship model of San Juan Nepomuceno captain’s boat is built very similar to the real boat thanks to its design using a false keel and frames. This ship modeling kit contains precisely cut board parts by means of a laser, hardwoods, brass, cast iron and fabric. It also has instructions for its assembly on DVD format. Once built, San Juan Nepomuceno Captain’s boat model measures 15.94” x 7.48” x 14.37” (405 x 190 x 365 mm). 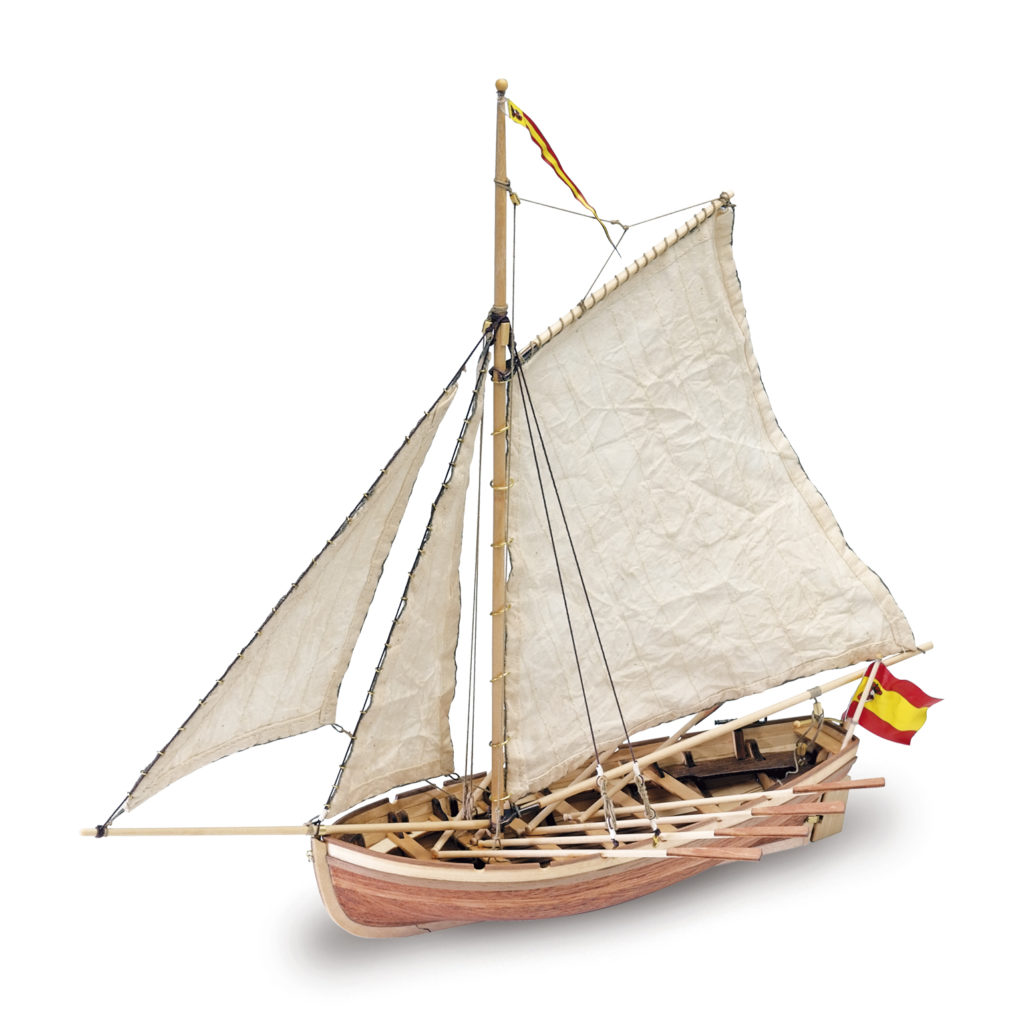 We continue with the renewed wooden ship model at 1/75 scale of the Viking ship. This scale model was the pioneer made by Artesania Latina’s and it was aimed to beginners modelers two decades ago. But now we have redesigned it with the latest 3D techniques! Viking is a scale model with history. Not only is it designed for newbies, but also for those expert ship modelers who want to enjoy building a really beautiful and emblematic ship model.

The Viking ship modeling kit includes all the parts of its hull cut by laser on top-quality linden board, wooden and metal decorations (like the two dragon heads), pre-stitched sail ready to be placed, and a stand and a plate. Its assembly is precise and pleasant. The new Viking includes a DVD for computer or laptop -PC or Mac- with clarifying step-by-step instructions and with tutorial videos where we show various modeling techniques and tricks that cannot be taught in a printed version. Once finished, the model is 11.53’’ (293 mm) length, 10.82’’ (275 mm) height and 14.2’’ (360 mm) width. 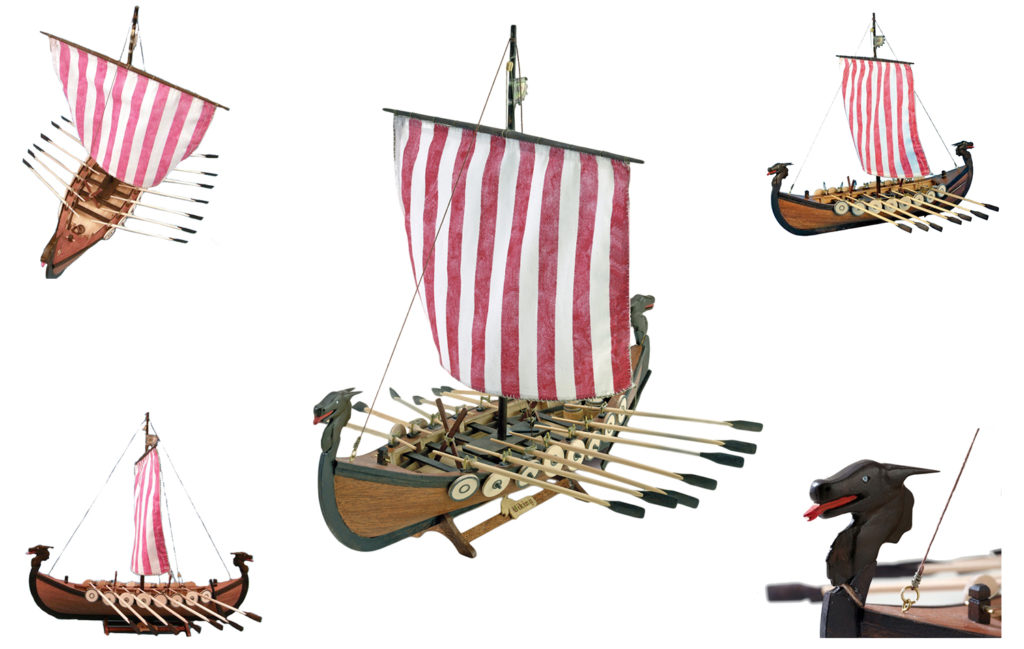 Our third proposition for beginners modelers is the Jolly boat wooden model of the great British ship of the 18th century HMS Bounty. Precisely, William Bligh fled with 18 loyal sailors after the riot of his crew on this small boat. In 1787 the HMS Bounty frigate left for the Caribbean in order to transport breadfruit, but the fatal climatic conditions forced them to land in Haiti, where many of the English sailors mixed with the island natives.

Its mounting system by means of false keel and frames, like the great majority of the scale models of Artesania Latina’s ships, brings its design closer to that of the real ship. The ship modeling kit of the HMS Bounty Jolly boat contains high-precision laser-cut board parts, hardwoods, brass, cast iron and fabric. Its construction is easy thanks to our complete step-by-step instructions in full-color, accompanied by the full-scale drawings of the completed model on DVD format. Once built, HMS Bounty Jolly Boat model measures 16.33” x 13.38” x 14.29” (415 x 340 x 363 mm). 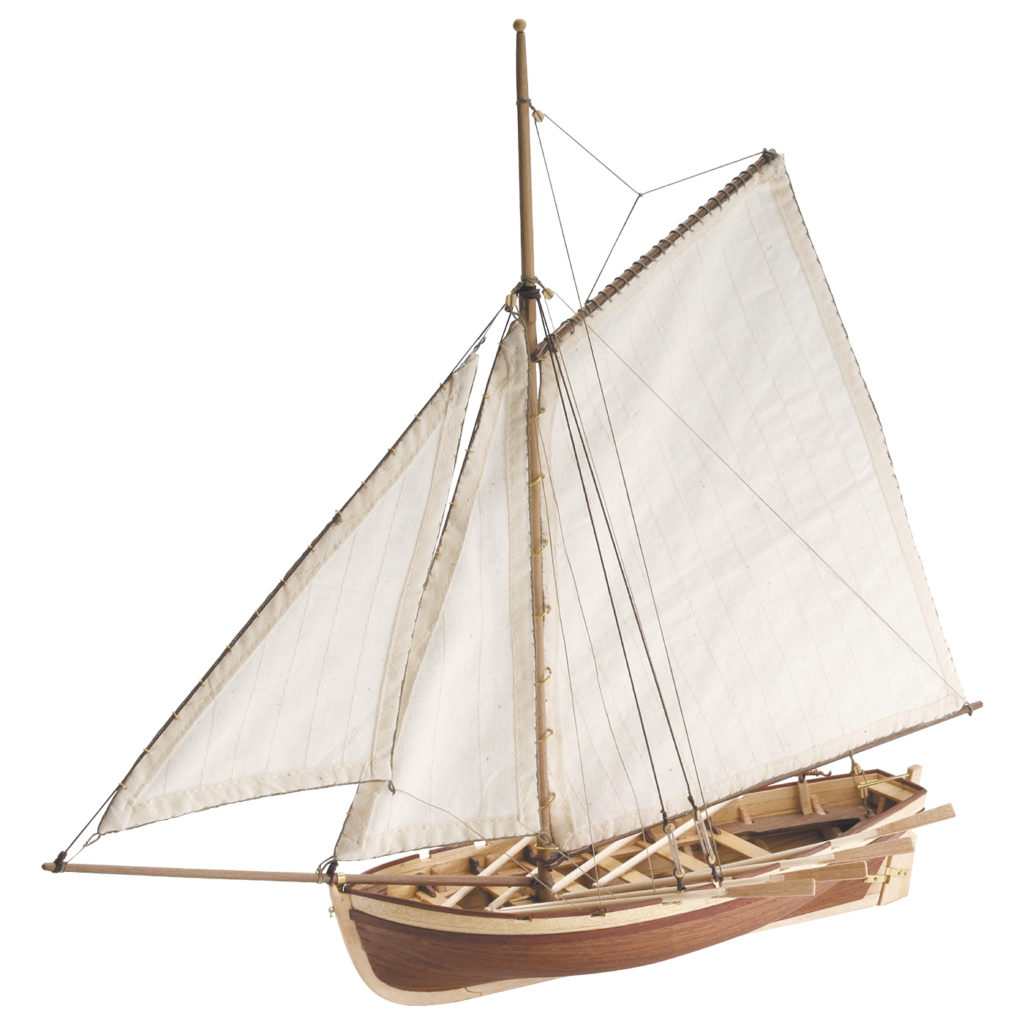 The fourth option for assembly aimed at novice modelers is the wooden model of the French fishing boat –it was fishing scallops- called Bon Retour, at 1/25 scale, which was used until 1980. Built in 1952 at the shipyards Tertu du Fret, in 1982 Guy Le Cornec undertook its restoration. Currently, the TUD AR MOR association manages the ship with the objective of preserving marine culture.

The ship modeling kit of Bon Retour, the French fishing boat, has an easy assembly thanks to its false keel and frames, which brings the construction of its model closer to that of the real ship. It has high precision laser-cut board parts, noble woods, brass, cast iron and fabric, as well as a complete step-by-step guide in four languages ​​and in full color, accompanied by the full-scale drawings of the finished model. Everything on DVD format. Once built, Bon Retour fishing ship model measures 15.55” x 4.05” x 14.60” (395 x 103 x 371 mm). 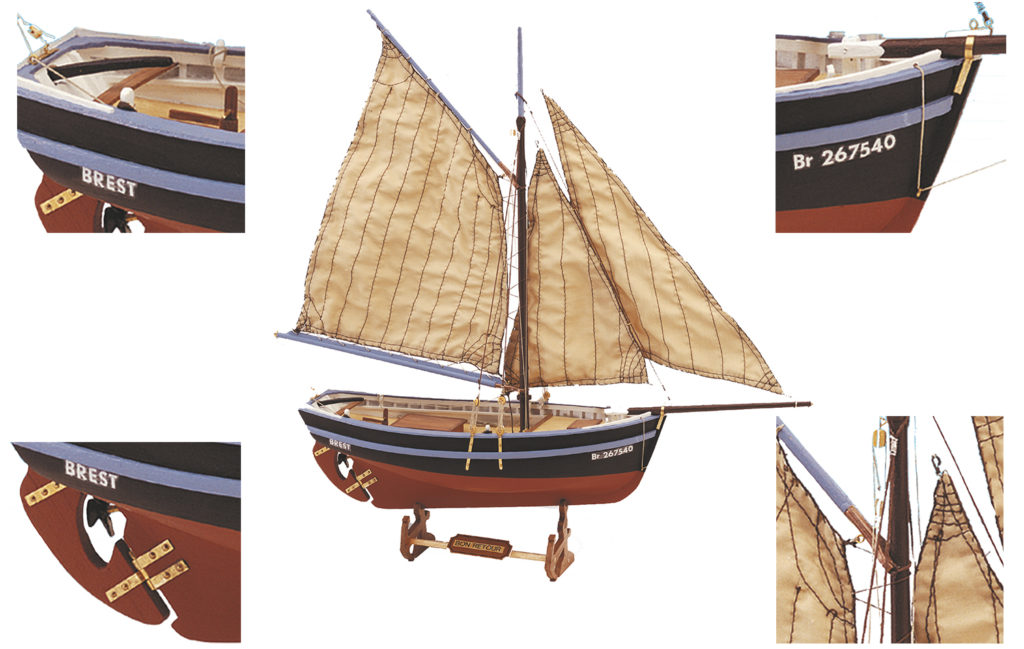 The sixth proposal is Saint Malo: it is a type of boat called Doris, and specifically this is French. The 1/20 scale wooden model of this fishing ship, from Canadian origin and from the end of the 19th century, is dedicated to catching cod in Newfoundland banks. It was used to fish long ago in Massachusetts and New Scotland, being introduced in France, Spain and Portugal later. Because of their solvency and solidity, of being cheap and their ease of stowage, the Doris continued to be used as workboats on sailboats and many other motor boats.

It is another fantastic wooden ship model for new modelers to start on this beautiful hobby. Like everyone else, its simple construction system and its simple sail make it easy to assemble, it is beautiful the Saint Malo model ship kit. The modeling kit of this French fishing vessel contains high-precision laser-cut board pieces, hardwoods, brass, cast iron and fabric, as well as a complete step-by-step guide in full color on DVD format, accompanied by the full-scale drawings of the finished model. Once built, Saint Malo fishing ship model measures 13.58” x 3.54” x 8.66” (345 x 90 x 220 mm). 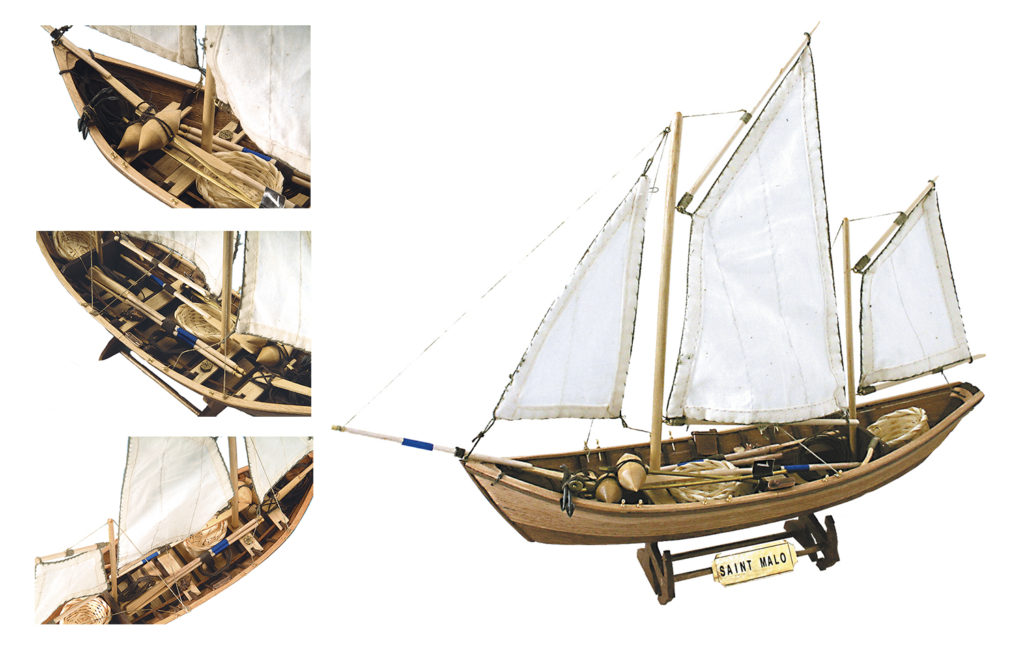 The Santisima Trinidad or Holy Trinity (officially Our Lady of the Holy Trinity) was a Spanish ship. It was the largest during the end of the 17th century and the beginning of the 18th century. It had 120 guns at the beginning, which were later expanded to 140. The Santisima Trinidad was one of the few ships of line of four bridges that existed. Symbol of the power of Spain on the seas, this ship had a tragic end. Firstly, It was defeated on the Battle of Trafalgar. Secondly, it sank when it was towed to Gibraltar by the English.

The modeling kit of Santisima Trinidad captain’s boat is also very easy to build, its assembly is close to the real ship one. It has high precision laser cut board parts, noble woods, brass, cast iron and sails ready to be placed, as well as complete step-by-step instructions on DVD format. 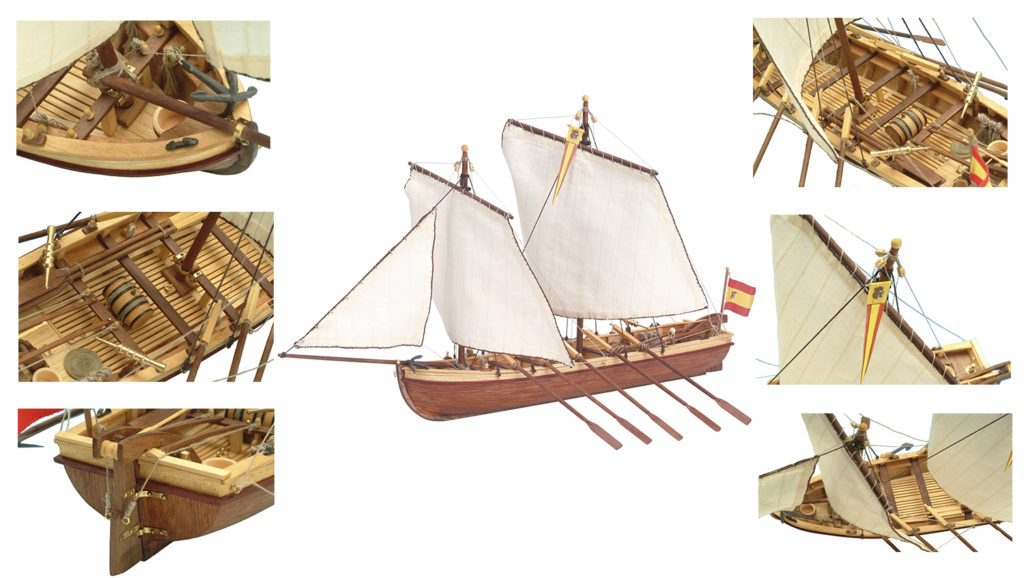 The seventh option for beginners friends of ship modeling is the 1/50 scale wooden model of the HMS Endeavour captain’s boat. Why? Its construction system is very similar to the real ship. The English ship HMS Endeavour, launched in the second half of the 18th century, was in charge of discovering new territories such as Australia and Tahiti. In addition to numerous islands, plant and animal species, and how to calculate with great accuracy the position in length by the maths.

The modeling kit of the HMS Endeavour captain’s boat features high-precision laser-cut board parts, noble woods such as birch, hand-stitched sails and cotton threads. It also brings a base stand for boat exposure once is finished, brass, cast and woven parts. You can build it thanks to our complete step-by-step guide in full color, accompanied by the full-scale drawings of the finished model. Both on DVD format. Once built, HMS Endeavour captain’s boat model measures 16.53” x 3.54” x 10.62” (420 x 90 x 270 mm). 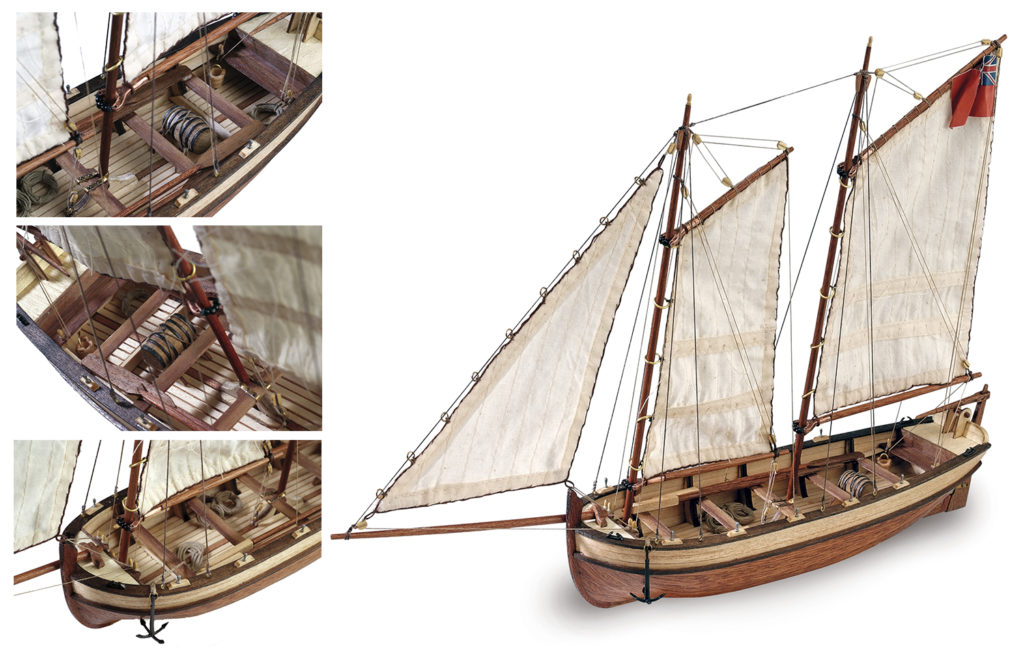 Next week we will continue with a new and final post about the catalog of ship models for beginners. The initiation to naval modeling has two names: yours and Artesania Latina.